In a Nutshell
Sam visits home, fights and makes up with Lila Cheney.

Plot
Returning home to visit his family, Sam gets a cold reception from his brother Joshua. Torn between his responsibities to the New Mutants and his family, Sam decides to return home for good, to help around the farm and guide Josh. He visits Lila, putting on a concert in nearby Charlotte, along with Dazzler, who is still in disguise as part of her band. Sam and Lila discuss Lila's impending visit to meet Sam's family. She shows him a present she plans to give his mother, but Sam is outraged that Lila would give his mother something she'd stolen. Lila is appalled Sam would think that of her, and Sam blasts off, their relationship effectively over. The next day, he confronts Josh, who expresses both jealousy at Sam for getting to leave home and resentment that he shirked his responsibilities to the family. Later, Sam talks with his mother, who tells him things are well in hand at home and urges him not to leave Xavier's school.

Just then, Josh bursts in, having gotten a call on the CB from one of Lila's band members. Apparently Lila and Dazzler took off in a plane after Sam and Lila's fight, but have gone missing. Together, Sam and Josh search for the plane, coming across the wreckage at sunset. Josh crawls into the plane and discovers Lila and Dazzler trapped but alive. He sings, giving Dazzler the energy she needs to blast them free. Dazzler tells Sam that Lila made the gift for his mother and didn't steal it. He apologizes, and Lila forgives him. The next night, Lila arrives for dinner wearing her usual punk rocker garb, and though Sam is concerned about how his mother will react, he says nothing. This satisfies Lila, who teleports away and returns wearing more traditional clothing, saying she would never embarrass Sam, but wanted to know that he wasn't ashamed of her. Sam's mother emerges just then and is introduced to Lila, and she presents her gift.

Firsts and Other Notables
Sam's younger brother, Joshua (later just Jay) Guthrie first appeared in Rom Annual #3 (along with Sam's mother and other siblings), but this is his first appearance in New Mutants. He is an accomplished singer and musician, and later stories will confirm his mutant power is somewhat related to those abilities, as his mother suspects. He will be a featured player amongst the fourth generation of teenaged Xavier students, circa the early 2000s, when he'll eventually also sprout wings and star in a terrible Romeo and Juliet pastiche written by Chuck Austen. 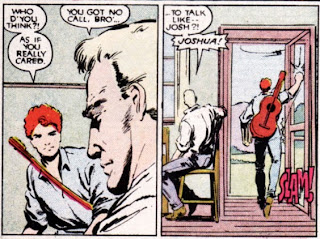 Curiously enough, Sam's younger sister Paige, who will eventually be part of the third generation of teenage Xavier students in Generation X before going on to the join the X-Men, is not mentioned amongst Sam's various siblings when he returns home. Theoretically, she could be there, unnamed, but the general impression given in this issue is that Josh is the next oldest after Sam and the rest are younger, while Paige is eventually said to be older than Josh.

A Work in Progress
Sam mentions that's he earned enough credits and good enough grades to apply to "proper" college (presumably one in which hand-to-hand combat isn't a required class), and that Xavier's trust fund would pay for it. 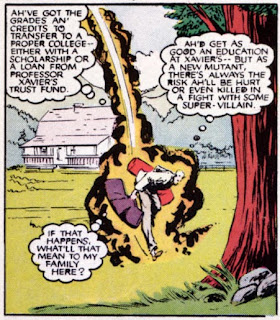 Dazzler is still a member of Lila's band, in disguise. 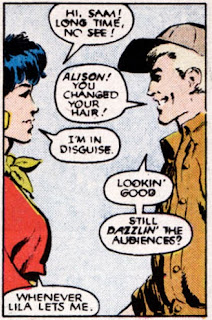 Young Love
Sam and Lila fight and make up in the course of the issue, with Lila arriving to meet Sam's family at the end. 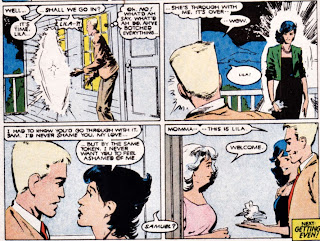 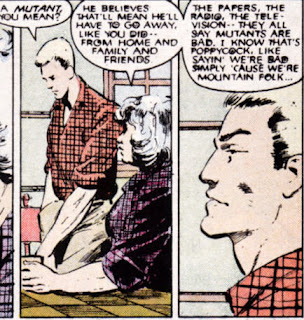 Sam is worried what might happen if word gets out that Lila is a mutant.

It's in the Mail
The letters page in this issue features a missive from a Palestinian, concerned about the stereotypical portrayal of Jemail and the tension in the Mid-East in issue #27. Claremont steps in to respond, pointing out that issue #27 is the second part of a three part story and that, in the end, the stereotypical perceptions were undermined. There's also discussion of a then-recent segment on 3-2-1 Contact (now the song is stuck in my head) about real mutants, and the winner of a contest run on that episode is announced.

Teebore's Take
This is another done-in-one solo story, this time focusing on the New Mutants' other co-leader. Though it hits some of the same beats as Dani's story (Sam is similarly worried about dividing his responsibility to the team with his responsibilities at home, as well as Magneto's past decision to close the school) and (likely intentionally) follows a similar structure (midway through Sam is called into action to rescue a loved one after being alerted by a CB radio call), this issue still stands on its own, helped by Sam's interactions with his family along with a long-delayed look at his relationship with Lila, something that's only been mentioned in passing (and even then, barely) since it began. Some of my favorite bits in this story come from Lila, both the way she makes Sam think she's coming to dinner in full-on punk rocker regalia to get back at him for his slight and the way she then immediately tones down the image, telling him she doesn't want to shame him.

Other than that, there isn't a lot to say about the issue, which shouldn't be construed as a commentary on its quality. This is the kind of thing at which Claremont excels, the kind of story which helps make the characters feel grounded and three dimensional even while they're mired in far more comic book-y, fantastical stories.

Next Issue
Tomorrow, new writer Louise Simonson comes aboard in X-Factor #6, and next week the X-Men battle the Hellfire Club in Uncanny X-Men #208 while the New Mutants gets some revenge in New Mutants #43.
Newer Post Older Post Home
Posted by Austin Gorton at 12:00 PM