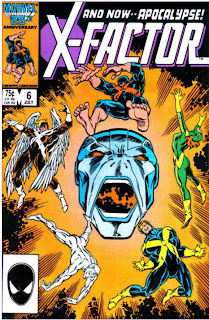 In a Nutshell
X-Factor battles Apocalypse and the Alliance of Evil.

Plot
As a crowd gathers outside Michael Nowlan's damaged motel room, the members of X-Factor regain consciousness, angry at being defeated by the Alliance and at Nowlan for turning on them. As the crowd gets restless, X-Factor is forced to sneak out the back in the face of their anti-mutant paranoia. At Apocalypse's chateau, the Alliance tries to get Nowlan to tell them about the apparent connection between X-Factor and the costumed mutants they fought, but Nowlan refuses. When the Alliance threatens Suzy, his ex-wife, he lashes out, his power supercharging the Alliance. Stinger accidentally blasts a whole in the roof, which draws the attention of Angel, leading X-Factor to investigate the chateau. Meanwhile, Apocalypse appears and places Nowlan inside a device which will regulate his power. That night, X-Factor infiltrates the chateau. Marvel Girl and Angel are met by the Alliance, while Beast discovers Nowlan only to be quickly knocked out by Apocalypse.

As Cyclops and Iceman join their teammates against the Alliance, Cyclops sees the Phoenix firebird appear around Marvel Girl. When Apocalypse enters the fray with the subdued Nowlan and Beast, Nowlan is forced to use his power to charge up the Alliance. But when Suzy is killed in the crossfire, he overpowers the machine, briefly charging up X-Factor as well before drawing his power back into himself, overloading his own body. With Nowlan useless to him, Apocalypse flees, abandoning the Alliance and telling X-Factor he'll meet them again. As the police arrive, the Alliance flees as well, leaving a dying Nowlan to tell X-Factor he kept their secret, and urge them to keep doing their good work. But as the others mourn Nowlan's passing, Cyclops worries about the Phoenix effect he saw, wondering if Jean and Phoenix could be one.

Firsts and Other Notables
Apocalypse makes his first full appearance, complete with the "A" on his belt and the weird cables connecting his elbows to his waist. It's established that his mutant ability gives him complete control of his body's molecular structure (an ability he uses in this issue like Mr. Fantastic, mainly to prevent himself from being blasted or to form his hands into hammers; later stories will expand his power a bit more). While not quite yet the villain he'll become, he's already expressing his "strong over the weak" philosophy, the defining element of his characterization. 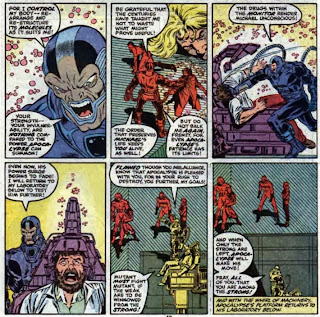 This is Louise Simonson's first issue as regular writer of the series, and she'll remain with the series almost to the very end of this iteration of the book. Claremont's long time editor on X-Men, she will work more closely with him and help make X-Factor feel more a part of the larger X-Men universe than it currently does (though the two books will not interact directly with one another for a few more years). Jackson Guice remains as the book's regular penciller, though he will shortly depart and be replaced by Simonson's husband, Walt.

During the fight with the Alliance of Evil, Cyclops sees the fiery Phoenix bird effect surrounding Jean, and the issue ends with him wondering if anyone else saw it. This kicks off a new running subplot in which we're led to question, along with Scott, whether there's still some connection between Jean and Phoenix. If memory serves, it ends up getting tied in with Simonson's efforts to get the characters out from under the X-Factor mutant hunter ruse, with this particular example standing out as an unexplained anomaly. 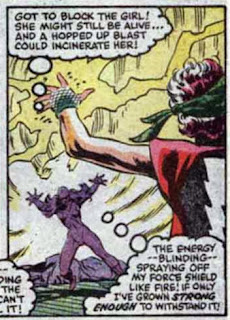 A Work in Progress
At one point Iceman de-ices himself, and we see his X-Factor costume for, I believe, the first time.

Marvel Girl finally expresses some reaction to having lost her telepathic abilities. 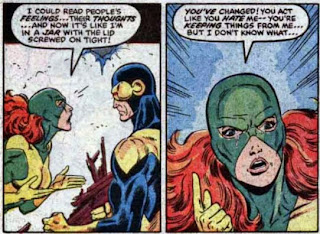 It's once again noted that Angel has superhuman eyesight. 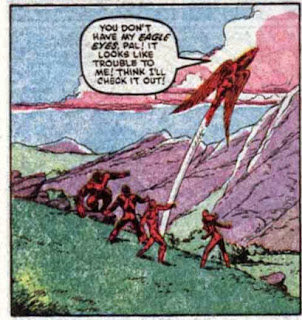 In order to help protect X-Factor's cover, Angel puts on a little show for the cops as they arrive at Apocalypse's chateau. 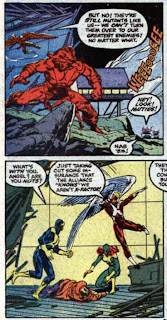 Scott Summers, Husband of the Year
Cyclops breaks down again, this time to Iceman, telling him that he suspects Maddy has left him, which, like, duh. 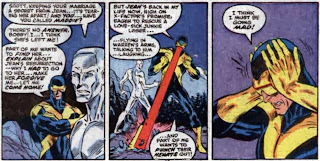 Young Love
At one point Marvel Girl reacts to Cyclops frustration with an ill-timed rant about how Cyclops resents her for not being Phoenix. 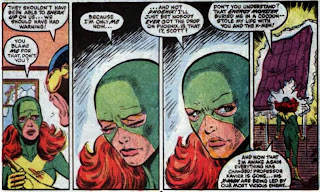 Jean asks Warren if Scott loved the Phoenix, as she's finally realized there must be something that is keeping Scott away from her. Warren decides its time to tell her the truth, saying its more complicated than that before getting cutoff by the evil mutants they're supposed to be sneaking up on. 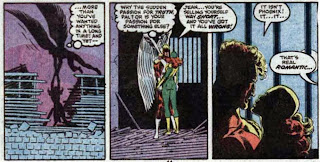 Human/Mutant Relations
The crowd gathering outside the hotel following X-Factor's battle with the Alliance has a heated discussion about what to do about all the mutants inside. 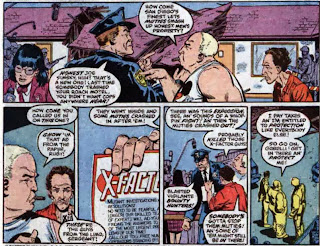 Now Cyclops has jumped on the "X-Factor is doing more harm than good" bandwagon, saying it's fueling paranoia about mutants (though his reaction is a bit overkill).

It's in the Mail
This issue has a TWO page letters page, with plenty of letters complaining about Scott's characterization and the flawed premise behind the mutant hunter ruse, with the expected corresponding responses handwaving away most of the concerns, though there is some indication of Simonson's impending work to dismantle the mutant hunter premise.

Louise Simonson on being assigned X-Factor
"Bob Layton was writing the book and Bob Harris asked me to do a fill-in because he thought Layton was not going to get his plot in on time. I turned my plot in and it so happened that Layton did get his plot in on time, so Harris didn't use my story. Oh well, whatever, I got paid for it! A few issues later, Layton decided to leave the book and I honestly do not know why. I don't know if it was his, [Jim] Shooter's, or Harras' choice. Bob asked me to take over the book and I think it was partly because he liked my fill-in and partly because Chris [Claremont] was my friend. I think someone finally realized that splitting up the X-Men and fostering a hostile relationship between the creators was a really bad idea. I believe I was brought on at least in part, because everyone knew that I could and would work with Chris. Also, my first story was very soap opera-y and I think Bob liked that."

Bob Harras on choosing Louise Simonson
"I wanted to make some sort of connection with the main X-books and I knew that Chris was very comfortable with Louise. I figured he would be much more amenable to the X-Factor book if someone that he was happy with was writing it. Also, 'Weezy' was a former editor of X-Men, so I thought she would give the book the right flavor."

Teebore's Take
Louise Simonson comes aboard, and immediately introduces a new caliber of villain while amping up the soap operatics. Apocalypse, making his first full appearance, still doesn't do a whole lot in this story, but there's enough of a shade of the character he'll become to make his appearance fun, and even a half-formed Apocalypse is better than more Stinger or Tower at this point. Meanwhile, the personal angst gets dialed up significantly, and though Layton certainly toyed with this stuff in his run (by re-introducing the Warren/Jean relationship and pretending Scott wasn't a jerk for trying to turn his situation into some terrible love triangle), Simonson really puts it front and center.

The end result is near-histrionic and almost child-like (with both Scott and Jean throwing what can only be described as hissy fits multiple times), something that will continue to plague Simonson throughout her run, and almost laughably ill-timed in the context of the story (something the characters acknowledge). But there's at least a sense that Simonson is trying to air this stuff out in order to move it along, to make subplot plot, so to speak. While none of these various interpersonal conflicts will be resolved anytime soon, they will at least stop spinning their wheels and move forward, and that's something. Simonson's debut then isn't that marked an improvement over the average Layton issue, especially since it's wrapping up a story he started, but there's some glimmer that the series is at least moving in the right direction.

Next Issue
The conflict widens in Uncanny X-Men #208, the New Mutants reunite in New Mutants #38 and the cracks start to show in X-Factor #7.
Newer Post Older Post Home
Posted by Austin Gorton at 12:00 PM