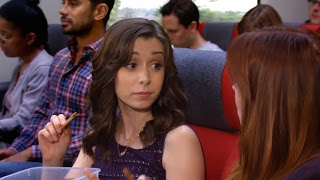 The notion that the creators were going to stretch this final season out to cover the roughly 55 hours encompassing Barney and Robin's wedding weekend seemed like a dubious idea, at best, last spring when it was announced, and the big fear was that the ensuing product would resemble the show we'd watched for eight seasons in name only. While there is still plenty of time for all this to go hideously off the rails, the first two episodes of How I Met Your Mother's final season suggested that this season may not end up feeling or looking all that different from previous ones. As much as the present-day timeline was condensed, and as much as the main cast was largely scattered for much of these first two episodes, this still felt fundamentally like the same show it's always been, and that's a relief.

And while it's easy to mock the show for the way this season is presumably going to stretch out events (Episode one: the gang gets to the hotel. Episode two: the gang checks in to the hotel. Episode three: the gang checks out their minibars?), that isn't all that atypical for this show either. After all, we now know the answer to the show's titular question is simple: she was in the band that played at your Aunt Robin and Uncle Barney's wedding. The idea of stretching out a simple event into a long, lengthy story is fundamental to this show, and has been a part of its DNA since the beginning. So even if the events of this season are, perhaps, getting more specific as we draw ever closer to the singular event at the heart of the series, that's still part and parcel of what the show has always been about.

Finally, perhaps the most promising element of these two episodes was the scene between Future Ted and the Mother at the end of the second episode. While nothing terribly groundbreaking in and of itself (though I did enjoy Present Day Ted showing off with his crossword puzzle, because Douche Ted, in small doses, is funny), the fact that they showed us that much interaction between the two characters this early in the season suggests we'll be seeing more of it moving forward, and that's definitely a good thing. Bays and Thomas have been very clear that if the show had ended last season, as they originally had intended, it would have ended literally, with Ted meeting the Mother in the final moments of the show. Instead, this ninth season is, apparently, going to give us a chance to see Ted and the Mother together, even while their first actual meeting is held for the very end of the show. If nothing else, the opportunity to see Ted interacting with the character at the heart of the series alone makes this final season worthwhile, no matter how many contortions of time and space it goes through along the way.

Other Thoughts
On the whole, I thought the first episode was stronger than the second, even with the Ted/Mother moment in the second episode, largely because the Planes, Trains and Automobiles plot with Marshall is doing little for me so far, in large part because it's being played so loudly and broadly.

On that note, for the record, not surprisingly, the Minneapolis-St.Paul Airport as depicted here is not an accurate representation of the actual airport.

Per usual, most of the Barney/Robin stuff was hit-or-miss (a hit? definitely the "ring bear"). I did appreciate that Barney didn't freak out over his brother's divorce, simply because I could easily see this show, in this season, tempted to make a three episode arc out of "Barney comes to term with his brother's divorce", complete with an episode where he does indeed regress and check out the Crab Shed.

Overall, I'm really liking the Mother herself so far, and am really impressed at how well she worked with both Lily and Ted. Both her scenes were the highlights of their respective episodes, and you could really see how this woman would pass Lily's front porch test for Ted's girlfriends.

I especially liked how Future Ted's interjections into the Mother's conversations with Lily showed that she doesn't automatically match Ted in everything, ultimately agreeing with Lily about his slow driving, bestowing upon him the awesome nickname of "Lady Tedwina Slowsby"

I could not care less about Ted, the locket, and any notion that Ted is the wild card at Barney and Robin's wedding. Even moreso than most Ted/Robin romance plots, this season especially that whole plotline feels like a complete nonstarter.

Barney: King Joffrey’s parents were brother and sister, and he was a fair and wise leader. - any gag that reminds us of Barney's pathological rooting for the villain of a story is a good one.

Lily: Nobody wears them
Ted: Then why is it called ... the glove compartment?”