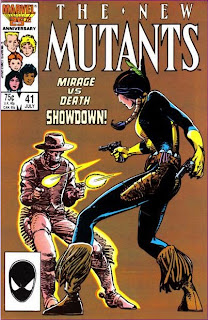 In a Nutshell
Dani fights Death for the life of an old friend.

Plot
Dani flies Brightwind home to visit her parents at their ranch in Colorado, filled with doubts about herself and her place with the New Mutants. The next morning, she heads to the mall, where she encounters Pat Roberts, a local boy and old friend who proceeds to harass Dani. When Dani sees an image of Death appear above Pat, she rushes off. As Pat and his friends leave, Dani watches astride Brightwind, hoping to prevent his impending death, but the onset of a blizzard forces her home. The next morning, with her parents stranded at another ranch, she finishes the household chores, telling Brightwind about how, before she joined the New Mutants, she and Pat were best friends, until the day her power manifested and she created images of his greatest fear and desire in front of his whole family. Ever since, he's hated her. Just then, she picks up a distress call from Pat on the CB radio. She flies into the storm atop Brightwind and finds his crashed truck, with a wounded Pat inside. 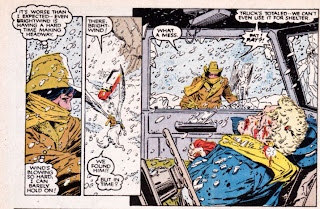 Sending Brightwind back to the ranch, Dani drags Pat into a nearby cave to tend to his injuries and wait out the storm. Inside, Dani accidentally uses her power again, and realizes that Pat both hates and loves her, his feelings for her mixed up by what he feels was a betrayal of trust on her part, followed by her sudden departure shortly thereafter. Unwilling to let him die, Dani challenges Death for Pat's life, who appears as a Western gunslinger, and defeats him. Dani hopes this will give her and Pat a fresh start, but after Pat is taken to the hospital, Death visits Dani once again. Death explains that though Pat lives, he has slipped into an incurable diabetic coma. Dani won her challenge, so Pat will live, but he'll never wake-up. Heartbroken, she allows him to die. Later, she's comforted by her parents, who tell her that some battles aren't meant to be won, only fought, and that at least she made peace with Pat before he died.

Firsts and Other Notables
For the third time (following X-Men Annual #9 and Power Pack #20) Dani uses her Valkyrie abilities to fight Death for the life of a dying individual, and once again wins (though this time, she ultimately acquiesces and allows Pat to die). 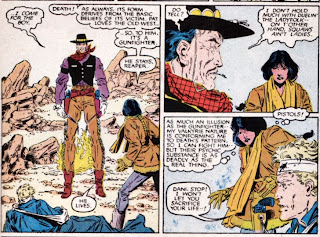 Terry Austin, John Byrne's longtime inker on X-Men, fills-in for Kyle Baker. In Baker's absence, Guice's pencils more closely resemble his concurrent work on X-Factor than they did in the previous issue, though his layouts and work in general here has far more energy than in X-Factor. Barry Windsor Smith returns to draw the cover.

A Work in Progress
Despite mentioning a regression in her control over her powers, something brought about by her death and resurrection at the hands of the Beyonder, Dani is able to use her power to generate images of specific personal desires, in this case what she would look like with shorter hair, which seems like a more advanced use of her abilities. 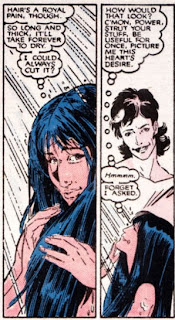 The "next issue" blurb at the end of the issue actually teases the events of issue #43, not #42. Considering that issue #42 is written and drawn by the regular creative team, this seems like a case of editorial oversight rather than issue #42 being a last minute fill-in.

I Love the 80s
Pat, while masking his feelings for Dani with anger, calls her pretty much every racially-inappropriate term for American Indian, from "Red" to "Papoose" to "Injun". 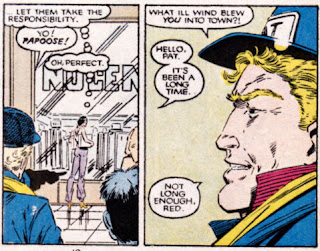 Claremontisms
As Dani tries on a risque miniskirt at the mall, we get a bit of Claremont Cadence to her thoughts. 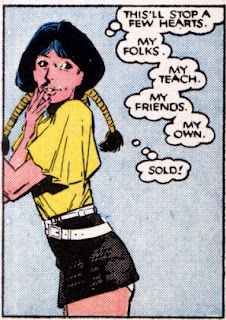 Teebore's Take
This issue begins a series of solo stories and done-in-ones that will carry the title through to "Mutant Massacre", and it gives Claremont a chance to take a few beats to show the characters decompressing and coming to terms with all the significant events of the last half dozen issues (the arrival of Magneto, their encounter with the Beyonder, and their time at the Massachusetts Academy). The first such story focus on Dani (she's the only regular character to appear in this issue) as she confronts Death for the life of a friend for the third time since becoming a Valkyrie. While the recurrence of that specific plot element is getting pretty ridiculous, Claremont puts an interesting twist on it this time out, as Dani technically succeeds in defeating Death, only to subject her friend to a life of living death as a result.

Beyond that, the rest of the issue functions as a character study on Dani, as she struggles to come to terms with recent events (this story takes place during the previous one, so she doesn't yet know that Magneto has reopened the school and her friends are relatively back to normal) and to decide, in the face of so many roles (daughter, mutant, leader, Valkyrie), which she'll ultimately embrace. Even without knowing that Dani sticks around for the foreseeable future, any suspense about her ultimate decision is sapped by the fact that the character is clearly enough of a favorite of Claremont's that he's not going to write her out of the book. Still, and even though this doesn't make for the most exciting or action packed issue, the time spent exploring Dani's character is a welcome and worthwhile endeavor.

Next Issue
Tomorrow, Apocalypse makes his first (brief) appearance in X-Factor #5. Next week, Rachel pursues an old vendetta in Uncanny X-Men #207 while Sam gets the spotlight in New Mutants #42.
Newer Post Older Post Home
Posted by Austin Gorton at 10:00 AM