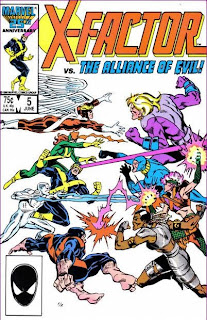 Plot
In Southern California, a mutant named Mike Nowlan escapes from a seaside chateau, pursued by a group of mutants, including Frenzy and Tower, called the Alliance of Evil. He escapes in a waiting car, but Tower knows where he's heading. Stopping at a motel, Nowlan contacts his ex-wife, Suzy, hoping she can get him some drugs, as being stoned makes his power useless, which would in turn render him useless to the Alliance. But Suzy insists she's gotten clean and refuses to help him, Hanging up, she sees an ad for X-Factor, and decides to call them about Nowlan. In New York, Cameron Hodge tells X-Factor about Nowlan, and they agree to head to San Diego. At that moment, Suzy is packing her bags, prepared to skip town for fear Nowlan will find her, when she's attacked by the Alliance. X-Factor arrives in San Diego and tracks Nowlan to his hotel, but he freaks out at the sight of X-Factor, instinctively using his power and amplifying their abilities to uncontrollable levels.

Once he calms down and X-Factor tells them the truth about themselves, he shares his story: how he became a drug addict in Vietnam, and only discovered his mutant power after detoxing, because it had been suppressed by his drug use. Due to the sensation created by his power when used on other mutants, he quickly gained notoriety amongst certain mutants, which brought him to the attention of the Alliance. Just as Nowlan agrees to let X-Factor help him, the Alliance shows up, with Suzy as a hostage. A fight breaks out, and the Alliance manages to overpower X-Factor. Nowlan agrees to return with the Alliance quietly, so long as they don't kill Suzy or X-Factor. Back at the seaside chateau, Nowlan is presented to the Alliance's master, who declares that Nowlan will help him create a race of super-mutants who he, Apocalypse, will lead to war against mankind.

Firsts and Other Notables
Apocalypse makes his first appearance in this issue, albeit only in shadows, in the last panel. His full debut comes next issue. As mentioned in the post for issue #4, and detailed here, Bob Layton originally intended for the Master of the Alliance of Evil to be the Owl, and he would have appeared in the final panel instead of Apocalypse. Editor Bob Harras stepped in and asked incoming writer Louise Simonson to create a villain to take the place of the Owl and serve as a sort of A-list foe for the team. Simonson came up with Apocalypse, as detailed below, and he was visually designed by Jackson Guice. 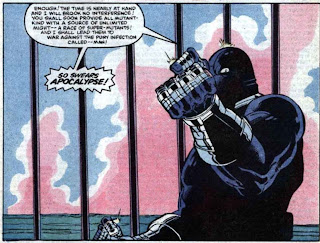 To a much, much lesser extent, this issue marks the first appearance of Stinger and Time Shadow, who join Frenzy and Tower as followers of Apocalypse in the Alliance of Evil. Stinger is a Valley Girl type who can generate an electric charge, while Time Shadow actually has a rather unique ability to shift himself forward and backward in time, but only by a few seconds, an effect which is depicted as creating multiple Time Shadows at once he calls "shades".

The Alliance of Evil (named only on the cover and not in the issue itself) sticks around through next issue, then Apocalypse quickly dumps them (off panel) for a much better group of lackies. They'll hang around on the fringes of X-Factor for awhile, but with the exception of Frenzy, the members and the group as a whole have largely faded into the ether.

This is also Bob Layton's final issue as the writer of X-Factor (co-creator Jackson Guice will stick around for a few more issues before leaving himself). As mentioned in the comments recently, I've never encountered any mention of why Layton left, whether he was fired or left of his own accord, though the letters page in Uncanny X-Men #206 mentions him leaving to work on a Spider-Man graphic novel (which ultimately goes unpublished).

In the course of this issue, an unseen person leaves a getaway car for Mike after his initial escape from the Alliance, and later, someone leaves a note for the unconscious Cyclops after X-Factor's battle with the Alliance. As a result of Layton's departure, the identity of that person remains unrevealed.

A Work in Progress
The X-Factor ad Suzy sees on TV is the same ad which appeared in X-Factor Annual #1, a nice bit of continuity.

Jean announces in this issue that she's going back to school to get a degree in psychology; I don't believe this is ever referenced after this issue, likely another consequence of Layton's departure. 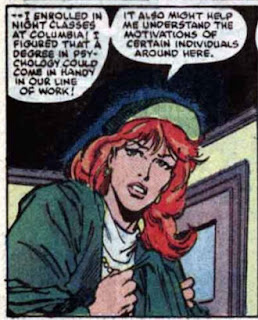 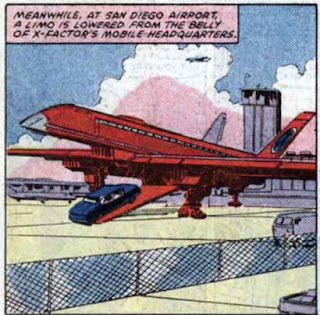 I Love the 80s
The opening splash page, featuring X-Factor working out in the gym, is almost painfully Silver Age-y in the way it crams in tons of exposition to update potential new readers. 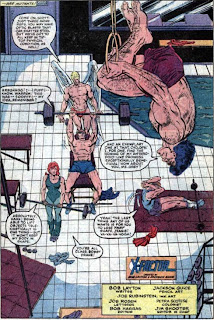 Even moreso than Frenzy, Stinger's look is very much of its time.

Similarly, Vera takes Hank shopping, decking him out in threads he compares to Elvis Costello's. 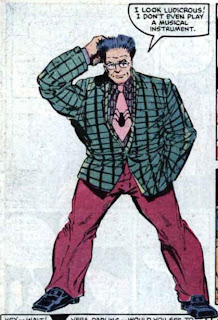 While shopping, Hank and Bobby are alerted to an emergency by their pages. 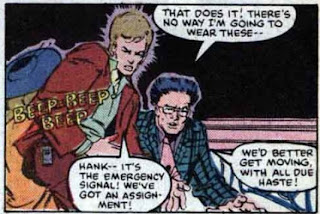 Nowlan mentions discovering his power after detoxing following his stint in Vietnam.

Build up your Vocabulary with Beast: Zoftig
(ˈzɑf tɪk). Adjective. Slang. Variant of "zaftig". (Of a woman) having a pleasantly plump figure. 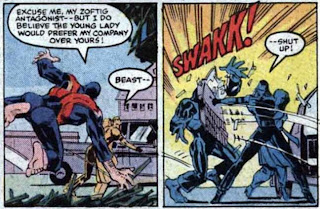 Young Love
Just as Warren is about to talk to Jean about Scott, they're interrupted by Hodge. Again. Convenient. 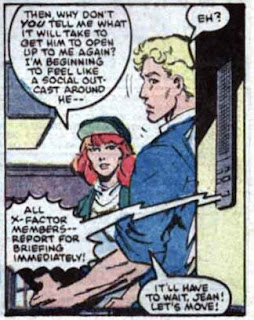 Human/Mutant Relations
Jean shares her concerns with the others that their mutant hunter ruse is doing more harm than good. They mainly brush aside her concerns, with Bobby even arguing the ruse is ultimately doing good for mutants. 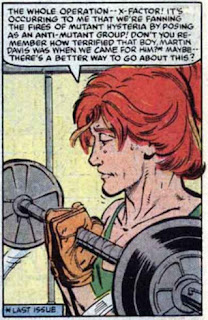 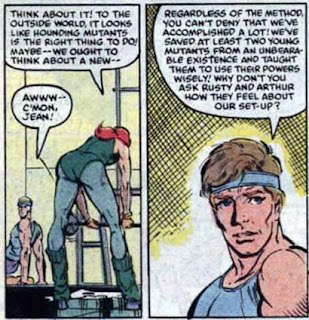 As if to prove Jean's point, Nowlan, upon encountering X-Factor, promptly freaks out, eliminating any hope for a peaceful discussion. 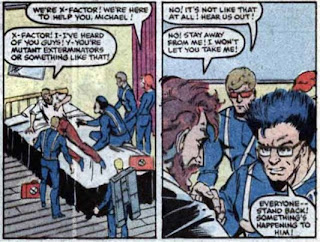 Louise Simonson on the creation of Apocalypse
"My feeling was that the Owl didn't have the stature to be a major foe for a major team. There was a set-up panel at the end of X-Factor #5 and we needed to show a villain in it. I tried to think really fast – what kind of character would be an appropriate foe? I always liked the idea – motivation, again, being my seed crystal – of a Darwinian sort of villain who would create disasters to force humanity to try to evolve more quickly … This is where Apocalypse came from. I wanted a character who would try to force mutants and humanity to the next level. I thought Apocalypse was a good name for a character. Jackson Guice designed him and he did a really good job. It was just a throwaway thing for him because I think he had also been planning on getting off the book, if I remember right … You can create a brilliant character, but if he looks stupid, he's just stupid. Jackson really deserves the credit for creating Apocalypse."

Bob Harras on the creation of Apocalypse
"All I had communicated to Louise was my desire that an A-level, first-class character be introduced. I wanted a Magneto-level villain who would up the stakes and give the X-Factor team reason to exist."

Callahan, Timothy. "Nightcrawler's Two Dads and the Owl That Could Have Been" Back Issue August 2008: p60.

Teebore's Take
Well, if you've been aching to see X-Factor take on a watered down, 80s-fied version of the Brotherhood of Evil Mutants, then friend, this is the issue for you! Needless to say, Bob Layton's final contribution to the X-Men mythos, the Alliance of Evil (including Stinger and Time Shadow) doesn't exactly light the world on fire, and after this story wraps, they will largely disappear. Apocalypse, appearing in the last panel of this issue and created by incoming writer Louise Simonson and Jackson Guice, ultimately will have a much greater impact on the mythos, but more on him later.

First, we have to get through Layton's last issue. Once the opening pages of clunky exposition and hamfisted soap opera are over, the rest of the issue is mainly one extended fight sequence. Which, for this series thus far, makes it one of the better issues. The Alliance of Evil hardly make for captivating villains - with the exception of Stinger, they all talk and sound alike, spouting generic villainous platitudes, and we have no idea what any of their individual motivations or goals are beyond some vague references to fearing withdrawal (and their ability to defeat X-Factor is pretty laughable). But as long as the main characters are fighting them we're not thinking about the book's flawed premise or how Scott still hasn't come clean with Jean or how hilariously generic and code-friendly all the drug abuse material in this story is. Thus, Layton's final issue is arguably his best of the series, though that's a really low bar to clear.