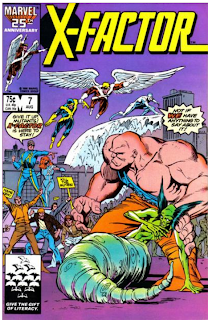 In a Nutshell
X-Factor's dual nature is called into question.

Plot
Their mutant hunter garb destroyed in the battle with the Alliance of Evil, X-Factor is forced to sneak aboard their own plane even while media reports connecting their mutant hunter and costumed identities begin to circulate. They return to find their headquarters besieged by both anti- and pro-mutant protesters. Meanwhile, in New Jersey, a pair of irradiated mutants, Bulk and Glow Work, are chased by a group of humans. Escaping into the sewers, they decide to destroy X-Factor before the radiation claims their lives. Back at X-Factor headquarters, Jean finally confronts her teammates about Scott's recent behavior and learns that he's married. Just then, Bulk and Glow Work emerge outside their building, demanding that X-Factor come out and hunt them.

With their mutant hunting equipment obviously a sham and the crowd watching from outside, X-Factor is uncertain what to do, until Warren comes up with an idea. Beast, Iceman and Cyclops sneak out of the building through the underground tunnels and emerge pretending to take Bulk and Glow Work's side, but actually doing their best to surreptitiously stop their attack. At the same time, Warren and Jean, as X-Factor, emerge from their building, along with Rusty, Hodge, and Vera, and pretend to fight their teammates. "Overcome" by X-Factor, Cyclops, Beast and Angel, along with Bulk and Glow Worm, escape into the tunnels. Unable to help them further, X-Factor reluctantly lets Bulk and Glow Worm go their own way. They return home, at which point Jean tells Scott it's time they had a serious talk.

Firsts and Other Notables
This is co-creator Jackson Guice's final issue as the series' regular penciller. The next two issues will feature a pair of guest artists before Walt Simonson comes aboard in issue #10. Also, for some reason, Louise Simonson is credited as "Louise Jones", even though she'd been working under her married name for some time now.

This issue features a trio of first appearances. First, there's reporter Trish Tilby (spelled "Tilbit" in this issue), who will go on to be a recurring character in X-Factor (and a love interest for Beast) and later the X-universe at large. 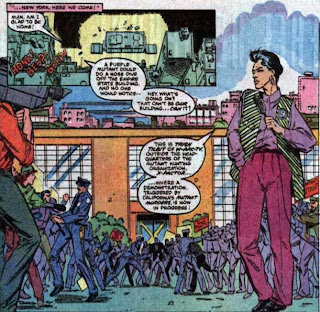 Secondly, a Morlock with the unfortunate moniker of Skids (whose real name we'll eventually learn is Sally Blevins), named for the forcefield which surrounds her, causing things to "skid" off, appears for the first time. She will also become a supporting character in the book as part of the junior trainee characters, start up a romance with Rusty, and eventually join the New Mutants. It's also mentioned that Masque has a tendency to use his power to disfigure Morlocks to make them even more abnormal looking (something he can't do to Skids).

Finally, this issue is the first appearance of Bulk and Glow Worm, two mutants who have been irriadted by toxic waste. Thankfully, these two do not become significant characters, making only one other appearance (in a future annual) before dying.

Jean finally learns that Scott is married this issue.

Born of a chant while trying to trick the public into thinking they're aiding Bulk and Glow Worm, the name "X-Terminators" is coined for when X-Factor is operating in their superhero costumed identities. Moving forward, X-Factor=the main characters posing as mutant hunters, while X-Terminators=the characters operating as costumed superheroes. 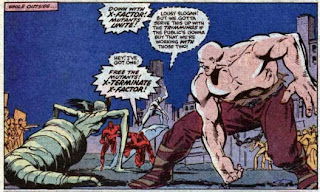 Returning to their headquarters amidst the public protest, Bobby jokes that Cameron Hodge, as their public relations manager, should be doing more about the problem. It could just be a one-off joke, or it could be the first intentional hint that Hodge is using X-Factor to fan the flames of anti-mutant hysteria. 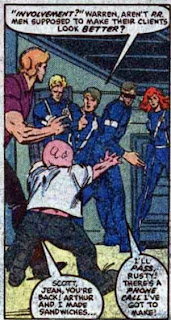 A Work in Progress
After largely ignoring it for the first five issues of the series, Jean continues to struggle with her lack of telepathy, suggesting a training session in order to help everyone get better at working together without it. 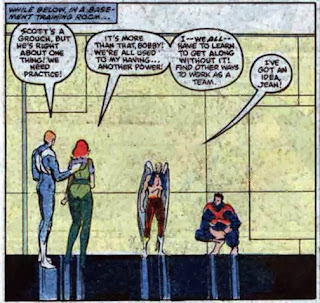 Rusty, still wanted by the authorities due to the events of issue #1, worries that in the increased media attention, someone might spot him. 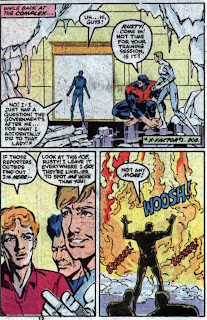 In a genuinely entertaining moment, when Warren tracks down Jean, she asks him if he has any more dirty little secrets to keep from her, and he admits that yeah, he probably does. 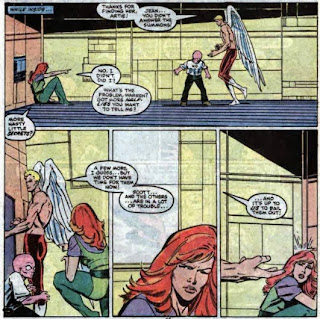 In order to help perpetuate their mutant hunter ruse, when Jean and Warren, as X-Factor, emerge to "battle" Bulk, Glow Worm and the X-Terminators, they are joined by Rusty, Vera and Hodge to help fill out their ranks.

It's said that Angel can't pretend to fight X-Factor because his wings are too conspicuous. Also, because the public knows Warren Worthington is Angel, a winged mutant, but that goes unsaid. 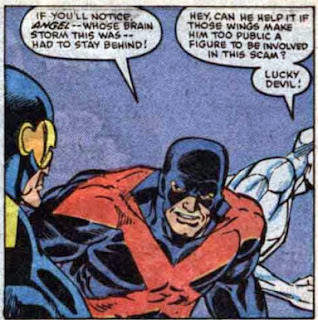 It's established that X-Factor can access the Morlock Tunnels (though they don't know them by that name) via their headquarters, a fact that will become important in future issues.

I Love the 80s
Even in the 80s the news was driven by ratings concerns.

Bulk and Glow Worm live in a toxic waste dump in New Jersey. Though depending on who you ask, having a toxic dump in Jersey may not just be an 80s thing. *rimshot* 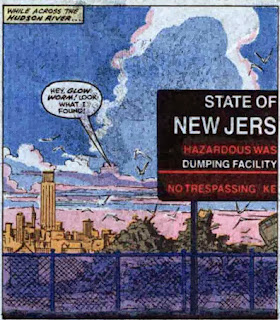 Worried about the radioactive Bulk and Glow Worm, Beast tells Iceman that his children would probably be mutants anyway, because that's the only negative side effect of radiation exposure. 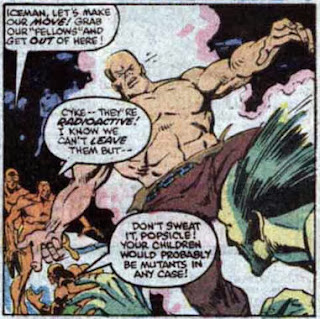 Scott Summers, Husband of the Year
While breaking into their plane, Scott slips and calls Jean "Maddie", which helps finally bring the whole situation out in the open. 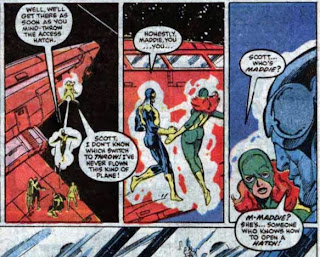 Believing Jean will leave him now that she's on the verge of learning he's married, Scott figures now might be a good time to try harder to reconcile with his wife, and proceeds to try and track her down (by swallowing his pride and calling everyone they know), to no avail (because, of course, she's in a hospital in San Fransisco, per Uncanny X-Men #206).

After learning about Maddie, Jean rushes off, and Warren ill-advisedly decides to run after her. 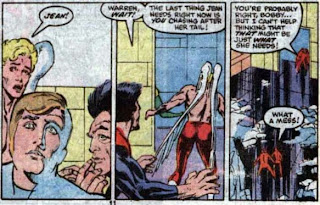 Human/Mutant Relations
Hearing a report about X-Factor's fight with the Alliance, one guy suggests that being a "mutie" doesn't mean you're a monster, while his buddy counters that it doesn't mean they're human, either.

Teebore's Take
Once again, there's a sense that Simonson is doing her best to get the title's problems out in the open. This issue finds X-Factor at the center of a media storm, forced to take drastic measures to preserve their mutant hunter ruse, in the process further realizing it's just not working. Plus, Jean finally learns about Maddie, and Scott puts a little more effort into saving his failed marriage. As in the previous issue, none of this stuff is immediately resolved, but there's the sense that it's getting addressed so that it can be.

Beyond that, Simonson makes some fairly significant additions to the book as she works to make it her own. Bulk and Glow Worm fail to rise to the level of even Tower, but they're clearly not meant to be much more than one-off antagonists that setup the real conflict of the story. But the introductions of both Trish Tilby and Skids, neither of whom do much in this issue, are significant, as both characters will be heavily involved in the book throughout Simonson's run, and remain a minor part of the X-Men universe even after her tenure on the title. She also gives a name to X-Factor's collective costumed identities, and while it may not be the greatest, we finally have a way to distinguish the two groups when talking about them. Plus, the next issue blurb teases a confrontation between X-Factor and Freedom Force, meaning we're finally going to see some classic X-Men villains in the book. All in all, things are looking up.