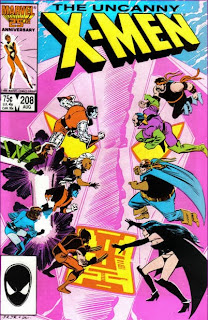 In a Nutshell
The X-Men and Hellfire Club come to blows over Phoenix.

Plot
In the Morlock Tunnels, the X-Men lambast Wolverine for trying to kill Rachel, despite his insistence that it was a necessary act, then set out alongside Callisto and some Morlocks to track down Rachel, unsure if she's even still alive. Meanwhile, in Central Park, a weakened Selene kills a mugger and his victim to rejuvenate herself, then entreats the Lords Cardinal of the Hellfire Club to seek out Rachel. Though Selene deigns to kill her, Sebastian Shaw insists she's captured alive, so that the Hellfire Club may use her to their ends. Elsewhere, Nimrod detects Rachel's weakened state, and determines this is the best time to eliminate her.

In Central Park, a badly injured Rachel, holding herself together via her telekinesis, comes across Selene's victims. Enraged that they died because Wolverine stopped her from killing Selene, she psionically attacks her teammate, which tells the X-Men she is still alive. The X-Men reach Central Park, where Caliban has tracked Rachel, along with the Hellfire Club and Nimrod. The Hellfire Club finds Rachel first, thanks to a transformed Von Roehm, but the X-Men are close behind, and a fight breaks out between the two groups. Rachel slips away in the confusion, just as Nimrod appears before the X-Men and Lords Cardinal, determined to eliminate both groups.

Firsts and Other Notables
While scanning Central Park, Nimrod notes that twelve X-Men are present, seven of which are the current roster of the team (Storm, Nightcrawler, Rogue, Wolverine, Shadowcat, Colossus and Phoenix). The other five are X-Factor, whom, in a little pseudo tie-in I've always enjoyed, we'll learn in issue #8 of their series are in a different part of the park dealing with a different situation. Presumably, X-Factor was never formed in Nimrod's timeline (as Jean Grey never died/was resurrected), which is why he still catalogs their members as X-Men.

The Inner Circle of the Hellfire Club is now using the term "Lords Cardinal" to describe themselves almost exclusively. Additionally, Von Roehm is once again referred to as Black Rook while Leland is the Black Bishop (the absent Pierce is, I believe, the White Bishop, at least according to the Marvel Handbook). Tension remains between Shaw and Selene, who is outwardly gunning for his role as leader of the group. Aside from Selene, they've also got a new set of hideous costumes. While Shaw's day-glo puffy sleeves and Tessa's Michael Jackson-esque face mask are pretty bad, nothing compares to Leland's inexplicable cape and headband mask.

Selene transforms Von Roehm into a lycanthropic state, a hereditary trait found in all her high priests, and uses him to track Rachel.

A Work in Progress
Last issue, Rogue mentioned that the Morlock Tunnels were a mile beneath the surface, and a narrative caption in this issue reiterates that factt which, as Blam pointed out in a comment on last issue's post, is patently ridiculous.

Wolverine tries to rationalize his attempt to kill Rachel to the other X-Men. It doesn't really address any of the issues inherent to his action. 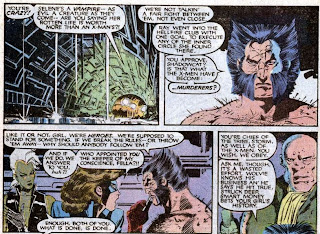 Sure enough, Rachel was right: the first thing Selene does after escaping from Rachel is kill two innocent people to recharge herself. 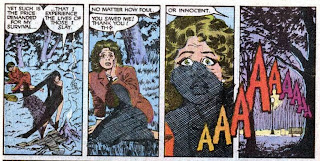 Nimrod, still living with Jamie Rodriquez and his family and masquerading as human, finds himself experiencing feelings, and decides he needs to run a diagnosis on himself. 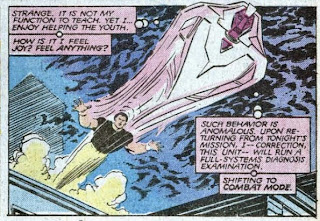 Caliban pops up, wearing the shirt Kitty brought him from Japan, and helps the X-Men track Rachel, though he'll shortly transistion over and become a supporting character in X-Factor.

The X-Men are communicating via "micro transceivers", convenient considering Rachel is out of action and unable to link them telepathically.

I Love the 80s
The confrontation between the X-Men and the Hellfire Club takes place in Central Park's John Lennon Memorial Garden, Strawberry Fields.

Artistic Achievements
Once again, we get a neat visual depiction of Rachel using her telepathy, as a series of panels comes more and more into focus as her power picks up on more thoughts (including Claremont's patented stream-of-consciousness thought bubbles). 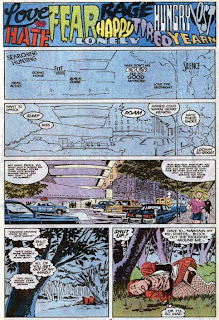 Rachel Summers, Crybaby
Admittedly, it's tough to throw stones at someone who is almost literally keeping their guts from spilling out through sheer force of will, but Rachel is, of course, terribly maudlin about her situation. 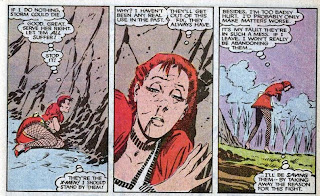 For Sale
The New Universe gets another, different, full page ad in this issue. 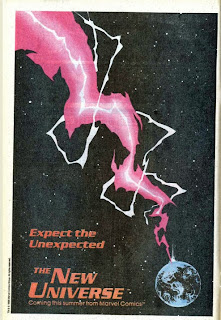 It's in the Mail
Letters in this issue applaud the creators for the explaining how Wolverine can smoke without consequence while illustrating the ill effects it had on Kitty in issue #196, while a response to another letter mentions the then-upcoming but ultimately-aborted Phoenix limited series, for which Rachel is being written out of the book. Also, the Classic X-Men reprint title is announced.

Teebore's Take
This issue essentially serves as the second part of a three part arc, though Claremont structures it differently than the traditional middle chapter of a three parter. Usually, these chapters are action heavy, setting up the resolution and denouement for the final issue. Instead, Claremont uses these pages to widen the conflict, beginning with the X-Men, then the Morlocks, searching for Rachel following her encounter with Wolverine (it's never made clear how Wolverine and Rachel became separated in the first place), then adding in the Hellfire Club's own search for the girl, before they come into conflict with the X-Men. At which point, in the midst of the X-Men/Lords Cardinal tussle, Nimrod enters the fray, setting up the action packed conclusion for next issue.

Beyond that, we get more of Claremont trying to rationalize Wolverine's actions against Rachel, and once again, it doesn't quite work (nor does it make clearer the intention he has stated in a later interview) and some pretty hideous new costumes for the Lords Cardinal, which could be an intentional homage to the more traditional superhero narrative (relative to the rest of the Claremont/Romita Jr. run) on display in this arc, but I'm not sure even I want to give Romita Jr. that much credit. This is a fun issue in a fun arc, and I like the way it's constantly widening the conflict, but beyond that, there isn't much to it - which, as with last week's New Mutants issue, isn't a criticism.

Next Issue
Tomorrow, the band gets back together in New Mutants #43 and Friday, X-Factor deals with its tricky public image in X-Factor #7. Next week, the conclusion to the Hellfire Club/Nimrod arc in Uncanny X-Men #209.
Newer Post Older Post Home
Posted by Austin Gorton at 1:00 PM