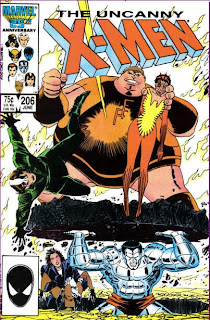 In a Nutshell
The X-Men battle Freedom Force in San Fransisco.

Plot
In San Fransisco, Storm stops a mugging, to much appreciation from both the victims and the arriving police, including Lt. Bree Morrell. Storm returns to Jessica Drew, the former Spider-Woman's, house as Kitty leaves on a date with Jessica's friend David Ishima. Meanwhile, on a flight bound for Los Angeles, Amanda Sefton questions the state of her relationship with Nightcrawler in light of their recent fight. Back in San Fransisco, Kitty returns from her date just as Freedom Force attacks the X-Men. The X-Men do their best against their old foes, but splitting their focus to help the bystanders caught in the middle of the melee causes them to be overwhelmed, especially after Rogue tries to absorb Spiral's powers but instead finds herself taken over by Spiral.

Just as Freedom Force attempts to take the defeated X-Men into custody, the police arrive, led by Lt. Morrell. She asks to see Freedom Force's warrant for the arrest of the X-Men, and when they admit they don't have one, she tells them that the X-Men have committed no crimes in San Fransisco and are considered civic heroes. Reluctantly, Freedom Force leaves, promising to return with the proper documentation. Morrel suggests the X-Men leave town before they return, and though rankled by the injustice of it, they agree. Meanwhile, at San Fransisco Memorial Hospital, an unconscious Madelyne, lacking any identification, is admitted as a Jane Doe, having suffered multiple gunshot wounds. Back in New York, Nightcrawler bids farewell to Judith as she leaves to take her crown, re-energized by his adventure with her.

Firsts and Other Notables
This issue ends the X-Men's brief San Fransisco sojourn, which began when the Beyonder teleported them there in issue #202, though it won't be the last time the team hangs its hat in that area.

We check in with Madelyne for the first time since X-Factor #1, as we see her admitted to a hospital in San Fransisco with multiple gunshot wounds. The mystery of what happened to her between her last appearance and this one will unfold in future issues, and it will eventually be revealed that the soon-to-debut Marauders attacked and shot her on the orders of their leader, Mr. Sinister (an event which occurs between X-Factor #1 and #2, explaining Cyclops' inability to reach her on the phone in issue #2). 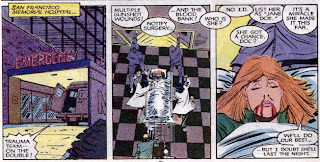 The second Spider-Woman, Julia Carpenter, who first appeared in Secret Wars, is revealed to have joined Freedom Force as of this issue. Future stories will reveal a connection between Carpenter and Val Cooper (Freedom Force's government liaison), while in this issue Spider-Woman is already questioning the brutal tactics of her teammates, setting up her eventual betrayal of the team to save the wrongfully-imprisoned Avengers in Avengers Annual #15.

For the third time, following issues #122 and #180, Storm faces off against a group of muggers. While her first encounter highlighted her relative naivete and the second underscored her then-recent punk transformation and the state of human/mutant affairs, this encounter is used to illustrate just how welcoming San Fransisco is to the X-Men. Where the victims in issue #180 were as scared of the mutant Storm as they were the muggers, here the people Storm rescues are genuinely thankful, and when the police show up, even they are appreciative of the help. 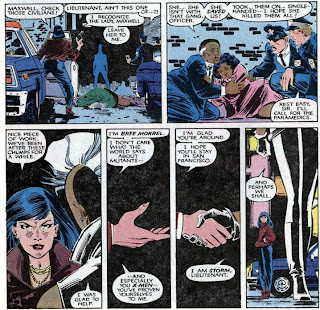 While Wolverine will be shown recovering from the injuries he sustained in the previous issue next issue, oddly enough, no mention of his absence is made by his teammates here, nor any additional explanation regarding how he went from San Fransisco to New York for the events of last issue.

In a brief subplot scene, Amanda Sefton is shown wondering about the state of her relationship with Nightcrawler -  it'll be awhile before we find out, as Amanda's next appearance comes in issue #253 (and Nightcrawler won't even be a part of the book at that point).

A Work in Progress
A handful of characters from Spider-Woman's cancelled series make appearances in this issue, including Jessica Drew, the former Spider-Woman herself, Jessica's private investigator partner Lindsay McCabe, her ex-boyfriend David Ishima, and police lieutenant Bree Morrell.

Kitty and David are going to a Lila Cheney concert when Freedom Force attacks. 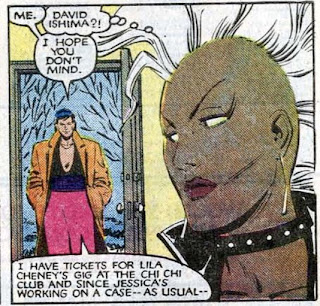 The X-Men receive a notably old postcard from Scott and Maddy, one which was obviously sent prior to X-Factor #1, though its unclear how their mail found the X-Men in San Fransisco (probably the same way they got mail on a mysterious island in the Bermuda Triangle).

Rogue notes that she came to terms with having Carol Danvers' memories and personalities in her head in issue #203. 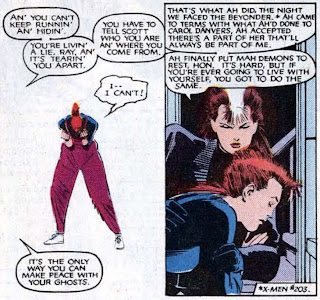 Freedom Force is unaware of Storm's power lose, though Spiral is able to sense the absence of her powers.

The issue ends with Nightcrawler bidding farewell to Judith Rassendyll at the airport, wrapping up his story from issue #204 (though Judith will make one additional appearance in an Excalibur one shot). 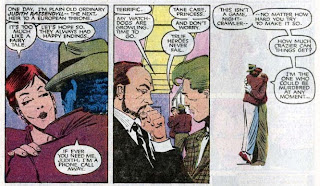 Artistic Achievements
During the battle between Freedom Force and X-Men, Spiral casts a spell that makes Kitty phase in place, an act which is described as being like an image smeared along a sheet of paper, and, appropriately and metatextually enough, that is how the result is depicted on the page.

Rachel Summers, Crybaby
In a continuity snafu, Rachel freaks out over the prospect of meeting her father in this timeline, even though she already has, on several occasions. 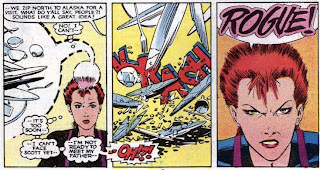 Human/Mutant Relations
Fearful of being arrested by Freedom Force, Rachel notes that its a short road from a prison to a death camp. 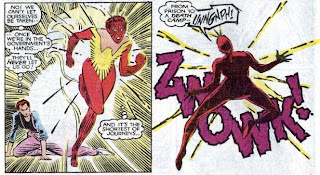 For Sale
There's an ad in this issue for the Star Wards Droids tie-in book. 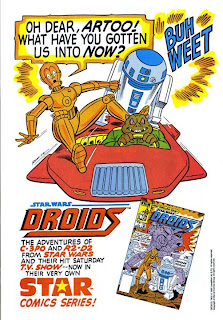 It's in the Mail
In letters covering issue #195, one writer calls Claremont on Kitty's assertion that Katie Power would too young to be a mutant (pointing out there have been several mutants Katie's age already), while an editorial response to another letter announces Louise Simonson as the new writer of X-Factor, saying that Bob Layton is leaving to work on a Spider-Man graphic novel.

Teebore's Take
Though it's been only two issues, it seems like it's been forever since we've seen the X-Men together in their own book. This also marks a return to Claremont's "narrative chapter" approach to the series, as this issues tells an essentially done-in-one story that still connects to larger plot and thematic threads. It is, in fact, the last such issue in the Claremont/Romita Jr. run, as next issue kicks off the more traditionally-structured multi-part Nimrod/Hellfire Club story that carries the series into "Mutant Massacre", at which point all kinds of things change. But before Claremont can thoroughly upend the status quo, he must restore it from the minor deviation of the last five issues.

So to shake the X-Men free of their West Coast idle, Freedom Force shows up to run them out of town. In addition to forcing the X-Men back to New York (where they will be reunited with the missing Wolverine and Nightcrawler), this reemphasizes the change in political status quo that was finalized in issue #199, as the former Brotherhood of Evil Mutants are now technically "the good guys". Though the X-Men are saved at the end by a technicality (in a bit I've always loved, the newly empowered federal agents have overlooked things like warrants, due process, or official identification), the meaning is clear: the villains are the establishment now, and the establishment is out to get the heroes.

Of course, all that thematic stuff is couched in some great comic book spectacle. Whether the Brotherhood of Evil Mutants or Freedom Force, these villains make for great antagonists, with visually exciting designs and/or powers, and Claremont and Romita Jr. rise to the occasion to depict a good old-fashioned comic book slugfest. In a way, it is a last gasp of the classic (the latest incarnation of the X-Men vs. the latest incarnation of their first super-villain team) before everything gets shaken up.

Next Issue
Tomorrow, Dani gets the spotlight in New Mutants #41, followed on Friday by X-Factor #5, Bob Layton's last issue on the title. And next week, the X-Men return to New York in Uncanny X-Men #207.
Newer Post Older Post Home
Posted by Austin Gorton at 1:00 PM