Welcome to the first "Last Week in Pop Culture" post, the latest evolution of my weekly "Last Week in TV" posts. Of course, this post is jam-packed with TV stuff, as a ton of new and old shows premiered in the previous week. Enjoy, and be sure to let me know what you think of the new format. 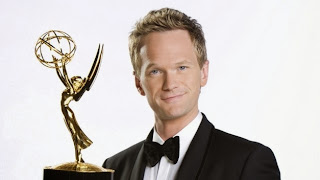 The good - NPH's middle number, the salute to choreography (which was just fun to watch), a break in the Modern Family cast's stranglehold on the supporting comedic actor Emmys (I like the show but it's far less consistent these days, and there are better shows/performances out there), and the relative unpredictability of the wins in general.

The bad - NPH's opening number/bit, the largely-superfluous and time-sucking Elton John and Carrie Underwood performances, and the numerous "In Memoriam" tributes independant of the main "In Memoriam" tribute (which were appropriate, but did make the whole show seem sadder, and ate up more time).

Also, with nearly every winner getting played off (only Merrit Weaver escaped that fate, since she didn't stick around long enough for the orchestra to cue up), and nearly every one ignoring it, the end result was simply having the ends of acceptance speeches feel like they were being underscored for dramatic value, which was mildly amusing. 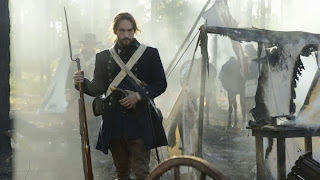 We'll see how long the narrative (and ratings) hold up, but this might be my new favorite show. I simply can't turn up my nose at any show that throws so many crazy, off-the-wall ideas out as this one (time traveling Ichabod Crane! The Headless Horsemen is one of the Four Horsemen of the Apocalypse! George Washington was fighting the Revolutionary War to save the world! Also, there's witches and demons and John Cho and magic priests, because of course there are!) while managing to strike just the right balance between seriousness and camp to make it all work (something which a show like Revolution consistently struggles).

After the pilot, I was suspicious we hadn't seen the last of Clancy Brown (for one, he's Clancy Brown, for another, we never actually saw him get beheaded, and another, we know he was aware of the whole Coven/Horsemen/Apocalypse business, at least in part, and seemed in with the magic priest) and the second episode proved me right, at least in one capacity. I still wouldn't be surprised if he turned up alive and well at some point.

Ditto John Cho - I don't need him every week, but I hope he sticks around as an undead Renfield type.

Amongst all the batshit insanity in the pilot, the thing that irked me was everyone referring to the last book of the Bible as the Book of Revelations, when in fact it's simply "Revelation" (no plural). It's something that nearly every show or movie that references that book does, but it still bugs me when I hear it (even more maddening: someone clearly did their research, as in the second episode, the Four Horsemen are correctly named as Conquest, War, Famine, and Death, yet the name of the damned book is still wrong...).


I finished the second season of The Newsroom this past weekend, and while I can't deny the show has its flaws (even in a much-improved second season), I also can't deny that I simply love listening to Sorkin's dialogue, and that I'll miss seeing these characters for the next forty-odd weeks before it comes back (assuming it gets picked up for a third season, which, if it doesn't, then I'm really going to miss some of these characters...).


Mom: Pilot
Like many Chuck Lorre shows, there's probably a decent show somewhere in the various shows Mom is trying to be, and it remains to be seen which will emerge, but I like the cast, specifically Anna Faris and Allison Janney, enough to stick around for a few more episodes and see what happens (the Big Bang Theory pilot was much more of a mess than this). Still, the studio audience really needs to be tuned down, even moreso than in most multi-cams. 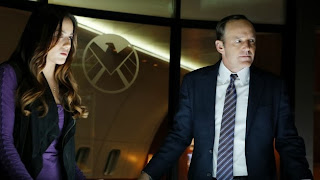 Good, not great. But it didn't suck, and right now, that's what's important.

Enjoyed the little Whedon touches (including Gunn AND Shepard Book!) and appreciated the general ethos Coulson displayed, wanting to find another way to end the situation other than simply killing their target. Plus, as a result, Gunn is still alive and could return again.

Also, it's pretty much a given that Cobie Smulders will become a regular as soon as HIMYM ends (and assuming this show makes it to a second season), right? She's not integral to the show, but having Maria Hill would be another nice (and relatively cheap) way to keep the show connected to the movie universe.


The Goldbergs: Pilot
Maybe it's because I just finished watching its first season, but this is no Wonder Years. Granted, that's an unfair comparison, in terms of quality and intent (this show is trying to be a lot more overtly funny than that one was, for example), but still. The nostalgia factor will keep me watching (never let it be said I can't be pandered to), plus the fact that Mrs. Teebore has decided the main character is pretty much an avatar of her perception of preteen Teebore, but I really hope it gets better.


Trophy Wife: Pilot
Possibly my favorite comedic pilot of the season (so far). It had to keep lots and lots of plates spinning, and it did, for the most part. It'll be interesting to see if it can keep that kind of manic energy going, but the strong cast should help smooth over a lot of rough edges.


I think the funniest thing on TV that I watched this week was Winston wearing a hoodie as pants on the New Girl season premiere. 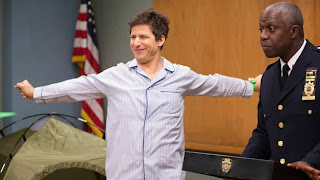 Every new show usually repeats the same beats as its pilot in its first three or four episodes, but man was "The Taggger" particularly shameless in that regard, right down to a nearly identical shenanigans/old captain flashback. Still, I appreciate that the show managed to introduce a (presumably) recurring antagonist in its first episode.


As for the pilot, the best part was the fact that Andre Braugher seemingly stepped right off the set of Last Resort and into this role. Nothing here was outrageously funny, but I did get a better sense of what this show will be than from, say, the Mom pilot.


So Luke on Modern Family got hit with the puberty stick between seasons. Not sure why its more noticeable on him than Manny, but I'm curious to see how it will affect what's become the character's schtick.


I would very much like to see Serial Apist, the low-budget horror film Penny starred in after coming to Californa (and not just for the reason you're thinking).


Glee: Love, Love, Love
Not giving Glee an in depth review every week might be the hardest part of this new approach, but I have to remind myself that for every episode (like this one) that alternately makes me want to applaud the show and throttle the life out of it, there are plenty of episodes that are just "meh", and thus difficult to write about. So, for now, I'll just hit some bullet points:
Favorite Song: Oh, "All You Need Is Love", I suppose, just for the energy and whackiness of it, and also because it's probably my favorite Beatles song of the group showcased here.


Stuff on my DVR I haven't watched yet:
Revolution, the second Big Bang Theory episode, The Crazy Ones, The Michael J. Fox show, and the Parks and Rec premiere.

Schmidt (trying to break-up with a girl): In a marketplace of ideas where culture is king and data moves faster than people—where scalable opportunities come from turnkey solutions...


Winston: An eye for an eye, Nick. A cat for a cat.
Nick: But what’s the other cat?
Winston: My heart.

Holt: Here are two pictures. One is your locker, the other is a garbage dump in the Phillipines. Can you tell which is which?
Peralta: That one’s the dump.
Holt: They’re both your locker.
Peralta: Gosh, I should have guessed that. He’s good!