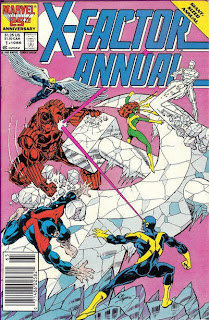 In a Nutshell
X-Factor fights an evil mutant behind the Iron Curtain.

Plot
X-Factor returns home from a series of missions and meets with representatives from the Soviet Union, who want X-Factor to come to their country and advise their scientists on methods for hunting mutants. X-Factor is reluctant to do so, but they are contacted by Senator Thompson, who tells them the truth about the mutant situation in Russia: mutants are detained and experimented on in a death camp, with the ultimate goal of creating artificial mutants beholden to the Soviet Union. X-Factor agrees to go to Russia, shut down the camp and capture the scientist responsible for running it, Helmut Heinreich. While Angel flies ahead alone, to locate the camp, the rest of X-Factor arrive in Russia and are introduced to Heinreich. Unknownst to them, Heinreich is actually a mutant himself, and quickly realizes the truth about X-Factor. He captures Iceman, duplicating his powers and appearance, then takes his place on the team.

Before the real Iceman can be killed by Heinreich's agents, however, he's rescued by a group of Russian mutant freedom fighters. Meanwhile, Angel contacts X-Factor, having located the mutant camp. The group, including Heinreich, infiltrate the camp in their costumed identities, but when Heinreich is alone with Cyclops, he attacks him and alerts the Crimson Dynamo to the presence of X-Factor. X-Factor holds their own against Heinreich and the Crimson Dynamo until Iceman and the Russian mutants arrive to turn the tide, though Heinreich apparently dies during the battle. X-Factor and the Russian mutants release the rest of the captives in the camp, and one of the Russian mutants uses his hypnotic abilities to reestablish X-Factor's cover and square things with the Soviet government. X-Factor flies home, not realizing that Heinreich, alive and well, is on the plane as well.

Firsts and Other Notables
Doppelganger, aka Helmut Heinreich, aka the most comic book-y German name ever, an evil mutant with the ability to copy other mutants' powers and physical appearances, appears for the first and, as far as I know, only time. The end of the issue hints at future appearances, but Bob Layton leaves the book before doing anything else with him. 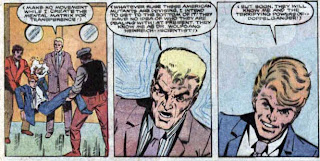 Similarly, Iceman is aided by a group of dubiously named and attired Russian mutant heroes, all of whom are making their first appearances, but, according to the Marvel Chronology project, at least a few of them have turn up in some random places in the future. 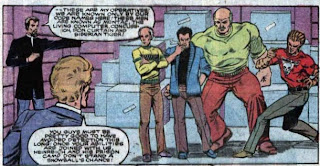 Senator Thompson pops up again for the second and last time. He specifically says that he's working from inside the Mutant Affairs committee to make things better for mutants, but, like Doppelganger, whatever plan Layton had for the character is lost when Layton leaves the title.

Layton writes and pencils, this issue, and though I've enjoyed his art in other places, this issue continues the series' trend for mediocre, unexciting art.

The Chronology Corner
Just prior to this issue, X-Factor appears in Iron Man Annual #8, written by Bob Harras, where they help Iron Man in a confrontation with the young mutant Willie Evans, who first appeared in Fantastic Four #203 and was one of the mutants John Byrne included in his original "second generation X-Men" pitch.

A Work in Progress
Returning from an off-panel mission at the beginning of the issue, Cyclops comments on dealing with a mutant who was "less cooperative", which begs a question the series never manages to answer: what does X-Factor do when they're called in to apprehend a mutant who turns out to be neither an evil mutant or an impressionable kid in need of training? Since they don't actually capture, imprison, study and/or cure mutants, what happens when an otherwise-benign mutant says "thanks, but no thanks" to their offer of sanctuary and training, or simply reacts in self-defense when they believe mutant hunters are coming to take them away? Do they fake capturing the mutant then just trust that he or she won't blow their cover? Angel wears a new costume in this issue, presumably so as not to risk being recognized as the Angel while he's sneaking around the USSR (even though, you know, the big wings would be something of a giveaway), though for whatever reason, that costume is colored blue instead of red on the cover.

In a mildly clever bit of power usage, Cyclops has Iceman drop the temperature inside their hotel room to below freezing in order to disable any electronic bugs the KGB may have installed. Of course, no one mentions the massive, conspicuous damage done to the room as a result. 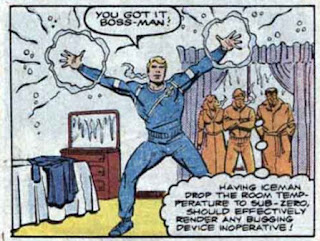 X-Factor's discovery of the mutant death camp, the first actual depiction of such a place in any X-Men-related comics, is perhaps the most well drawn page in the issue, though, in light of the Comics Code, the depicted happenings are suitably sci-fi enough to not be too shocking. 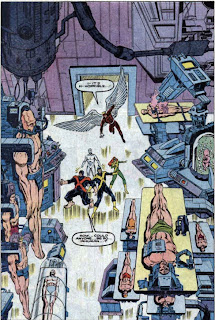 Doppelganger uses Iceman's powers in more elaborate ways than Iceman himself, which will be a recurring character beat for Iceman throughout the 90s (Doppelganger even creates big ice fists, something Iceman himself will eventually do as an example of him stretching his powers to try and reach their full potential). 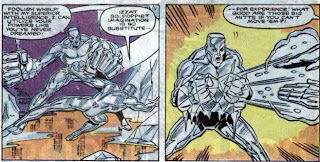 I Love the 80s
Taking place in Russia during 1986, this issue is, of course, filled with tons of now-dated references to the Soviet Union and the Cold War.

Human/Mutant Relations
Passengers aboard X-Factor's plane freakout when Angel is seen flying outside the plane.

Teebore's Take
There's an intriguing premise to this issue, perhaps the most intriguing premise to an issue of this series yet. The idea of a mutant death camp (rather standard material these days in the wake of Genosha, but still something of a novelty at the time), the very manifestation of Magneto's darkest fears, has potential, especially one situated in the Soviet Union at a time when the Cold War was still very much a concern (a setting which would, also retroactively, add some charm to the issue reading it today). Add to that the fact that the Soviet desire for X-Factor to come to their country presents an interesting dilemma for the team that takes advantage of their cockamamie mutant hunter scheme (in that X-Factor can't present their methods for dealing with mutants to the Soviets without blowing their cover), and the stage is set for, at the very least, an intriguing read.

Unfortunately, this is still Bob Layton's X-Factor, so all that potentially intriguing setup gets squandered by Silver Age-esque execution. The death camp, instead of serving as a grim statement on the status of human/mutant relations, turns out to be run by an evil mutant, because X-Factor needs someone superpowered to punch, while the Soviet setting amounts to very little beyond the usual "avoid the KGB" material, and the main characters weasel out of the mutant hunter dilemma in the most obvious way possible (by telling the Soviets they can't give up trade secrets). So despite the intriguing premise, the end result is an overlong and ultimately pointless annual on par with the worst X-Men annuals. Which for this series at this time in its run isn't surprising, but still somewhat disappointing, as this issue had the potential to be a tick or two better.

Next Issue
The X-Men face off with Freedom Force in 'Frisco in Uncanny X-Men #206, while Dani once more fights death to save a friend in New Mutants #41 and a future foe of X-Factor makes his first appearance in X-Factor #5.
Newer Post Older Post Home
Posted by Austin Gorton at 1:15 PM