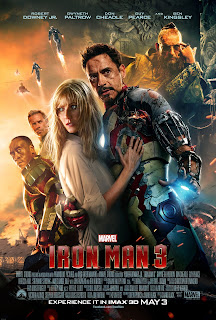 A huge step above the lackluster previous film in the series and a worthy follow-up to The Avengers, I still would have liked a bit more of Iron Man himself and more nods to the shared universe. Nevertheless, there's no denying this was well-crafted and tremendously fun, largely carried by Robert Downey Jr.'s phenomenal performance.
A 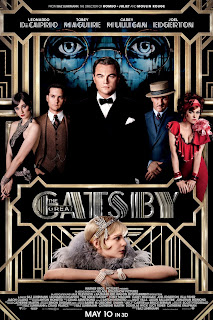 A surprisingly-faithful adaptation of the book (one of my all time favorites), Baz Luhrmann restricted most of the changes to the inclusion of contemporary music (which wasn't nearly as distracting as I'd feared). Even his signature visual style was suitably restrained, remaining a thoroughly-Luhrmann picture without overpowering the story. I could quibble with the casting of Tobey Maguire as Nick, who does great playing wide-eyed Nick at the beginning but less so the more jaded Nick of the end, but that's really just picking nits.
A- 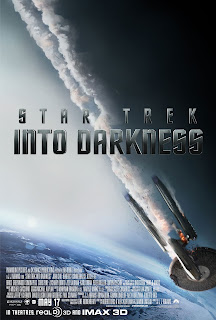 Possibly the most-reviled movie of the summer (at least on the internet), I didn't dislike this nearly as much as everyone else. In fact, I quite liked it. Yes, the title is still stupid, and yes, it's far more Star Wars than classic Star Trek, but that was largely true of the much better received previous film, and this felt like a worthy follow-up to the world established in that one (and look - Star Trek: The Motion Picture is classic Trek, but I'd still rather watch this again that one, any day). Once again, everyone in the large cast received at least one moment to shine, and while I can't deny the story has some holes in it, forcing characters to make some pretty big leaps for the sake of the plot, at the end of the day, I was able to just sit back and enjoy this.
B+

Now You See Me 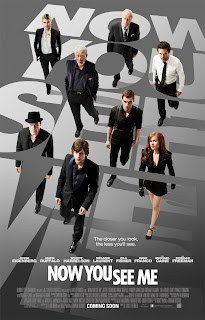 I'm a sucker for both heist movies (like Ocean's Eleven and The Italian Job) and movies about stage magicians (like The Prestige or The Illusionist), especially ones where it seems like the main character(s) are done for, only to learn they've been in control of the situation the entire time, and this movie is pretty much all of that. Nothing here is groundbreaking or exceptional, but the cast is fun to watch and for every beat of the story I saw coming, there were at least a few beats of genuine surprise. It's the kind of movie I'll stop to watch when I'm flipping channels on a lazy Saturday afternoon and see it airing on TNT (and I mean that as a compliment).
B

This is the End 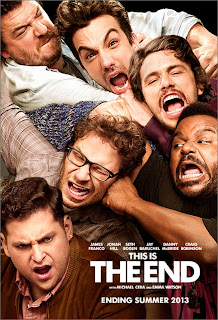 Hands down the funniest film of the summer, if not one of the funniest films I've seen in years, yet also one with a surprisingly well-realized apocalyptic plot (short of a Kirk Cameron movie, I can't think of anything else that uses the Rapture, straight-up, as the trigger for its post-apocalyptic setting). All of the character work, from actors playing (theoretically) skewed versions of themselves to varying degrees, not only generates a ton of laughs but also keeps everything grounded amongst the cannibalism and demon penises.
A 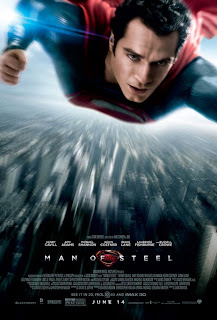 Another movie I liked more than the internet, though one that still had plenty of problems. As Dr. Bitz mentioned, structurally, it feels like the movie is missing a second act (Clark basically goes from "yeah, I'll be a hero" to fighting his greatest fight ever with no beats in between; it takes away from the greatness of your fight when it's also your only one), and while I have issues with the ending, they aren't the same issues everyone else has (I don't have a problem with Superman killing Zod; there's precedent for that. The problem is that the film never establishes that killing someone is a big deal for Movie Clark and something that he'd only do as an absolute last resort. So while his anguish over killing Zod made sense to me, from what I know of the character in other media, it made no sense for the character as presented in the film). Still, the cast was really strong, and we finally got a Superman movie where he punched someone, so that's good. Really, this movie just made me hungry for a sequel, a chance to see this cast in these roles again, a chance to address some of the concerns raised by Clark's characterization in this movie. But in the meantime, unfortunately, all we have is this flawed one.
C+ 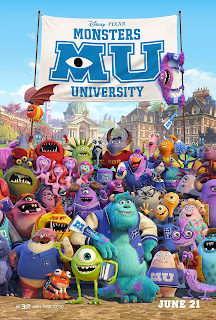 I've never been a huge fan of Monster's Inc. (it's a perfectly good film, just not one of my favorites), so I wasn't expecting much from this year's annual Pixar offering. Instead, I end up liking this quite a bit. While obviously a pastiche of coming-of-age, rowdy college films like Animal House and Revenge of the Nerds, with characters lifted almost whole cloth from those films (including, to Homer's delight I'm sure, a crusty, bitter old dean), the story is really about someone accepting that they're not ever going to be the hero of the story, and that that's okay, and I found that very affecting.
A 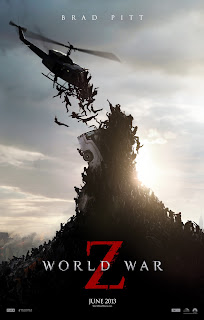 Not a bad film, in and of itself: Brad Pitt brings a steely weariness to the main character, and there's some enjoyable and well-executed set pieces throughout. But this is not the movie promised by the title, with the closest thing to a world war against zombies (it's right there in the title!) coming via a brief montage at the end. That's the movie I wanted to see, and was implicitly promised by the title: a macro-level look at the aftermath of a zombie outbreak, instead of the micro-level take used by every single other zombie movie and TV show ever. I was promised something a little bit different than the norm, but what I got was more of the same. Enjoyable and well done, but still the same.
C- 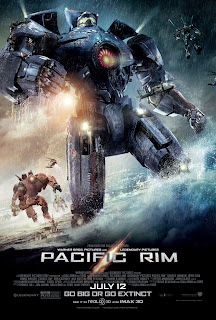 Deeply disappointing. It's hard to screw up a concept as golden as "giant robots punch giant monsters", but somehow this did. Putting aside my nitpicks (like the co-pilot of a mech who shares his mind with the other pilot somehow not knowing that their mech still had a sword when hope seemed lost, and also, them not using that sword before all hope seemed lost), there were larger issues: the world building seemed incomplete (why was it such a big deal all the Kaiju were clones?), most of the performances were lackluster (Idris Elba did his best to elevate some pretty routine material, and Charlie Day managed to make a funny part funny, but everyone else was pretty awful and wooden, especially Charlie Hunnam), there was lots of telling instead of showing (we're told how awesome the remaining mechs are, yet the first time we see them in action, they're quickly destroyed. In fact, as a whole, the mechs seemed really flimsy, and I wondered how they'd lasted this long), and the way the actual fights were shot left me wanting (most of them were done in extreme closeup, which made things more visceral and intense but also harder to tell what the hell was going on, so I couldn't even just enjoy the fights). I really, really wanted to like this, but in the end, the execution didn't live up to the premise.
D 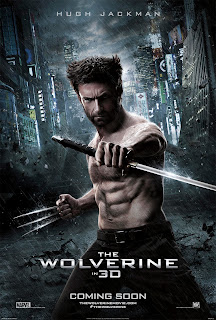 It's both kinda cool and a little sad that the current movie market place is such that a Wolverine solo film can be released and it's almost an afterthought. Once upon a time, that would have seemed like a mindblowingly huge thing; now I pretty much said, "oh yeah, there's a Wolverine movie out. I should probably see that". In the end, this was much better than the previous Wolverine movie (though it doesn't take much to clear that particular hurdle), though not without faults of its own, mainly little nitpicky stuff (like Wolverine healing when his power was taxed, or his claws not cutting things they should have cut) and a severe lack of Wolverine vs. ninja action. Wolverine's relationship with Mariko felt very routine, but I did enjoy his relationship with Yukio, here rejiggered into a Wolverine/Kitty Pryde, mentor/mentee kind of thing.
B 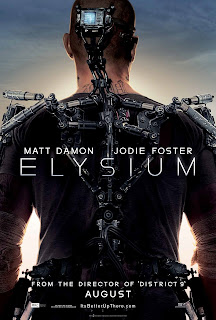 I probably went into this with too high of expectations. A big fan of District 9, which managed to hit that sci-fi sweet spot of thinly-veiled social commentary and cool action sequences, I was hoping for more of the same from Elysium. And hey, Matt Damon and Jodie Foster can only make things better, right? Unfortunately, while the action was still top notch, a lot of it (including the climatic fight between Damon and Sharlto Copley's bad guy) was filmed in that annoying hyper-realistic closeup manner that obscures most of the details of the action (it'd be like watching a Fred Astaire/Ginger Rogers dance number where they only filmed their left arm and shoulder), while the social commentary seemed to take a back seat once the rather obvious point of "this is where our world is headed in terms of social and economic inequality" was made. And Jodie Foster was pretty much a dud, a bizarrely-accented one-dimensional that even she couldn't elevate. So yeah, not a terrible movie, but like World War Z, a disappointing one. Then again, unlike World War Z, I might have brought that on myself this time by expecting too much.
B- 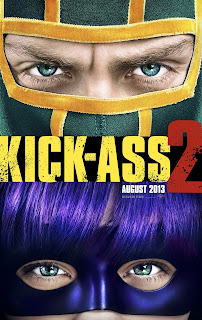 A far-from-perfect but perfectly suitable follow-up to the first film, it suffered any time it wasn't making jokes or featuring an action sequence. Also, way, way too much time was spent on Hit Girl trying to blend in at school and be normal and not nearly enough time was spent on her being, you know, Hit Girl.
B- 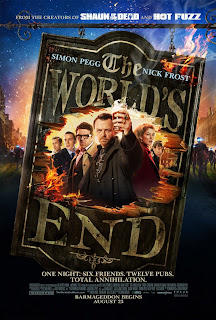 In any other summer, this would have been the funniest movie about the apocalypse, but this year it has to settle for second, after This is the End. Still, this is a worthy conclusion to the Wright/Pegg/Frost Cornetto Trilogy. More sly and wittier than the more over-the-top and laugh-out-loud Shaun of the Dead and Hot Fuzz, this is also a much more grounded film (despite the presence of alien robots), built around a surprisingly-poignant core relationship and the struggle with the unending passage of time and un-achieved potential that struck a chord in me.
A
Newer Post Older Post Home
Posted by Austin Gorton at 12:00 PM