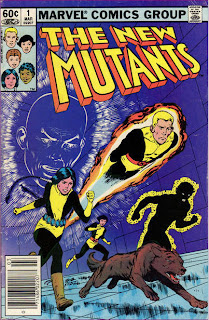 In a Nutshell
The New Mutants get acquainted with the school and each other.

Plot
The New Mutants look on as Shan gets an unwanted haircut from Stevie Hunter. While joking around, Dani accidentally manifests images of Shan's horrific past. Enraged, she attacks Dani until Roberto pulls her off. Frustrated at her lack of control, Dani wanders off, ending up in the X-Men's wing of the mansion. She spends the day tending to Storm's plants before being telepathically summoned to the Danger Room. Meanwhile, in London, Moira and Illyana arrive at the residence Gabrielle Haller, the Israeli ambassador. She asks Moira for help treating her autistic mutant son, and explains that she doesn't want Xavier's help because he is unknowingly the boy's father. In New York, Professor X introduces the New Mutants to the Danger Room, showing them the basic fitness mode as well as an advanced training scenario designed for the X-Men. One by one the New Mutants attempt to cross the Danger Room, but all fail to accomplish their goal. 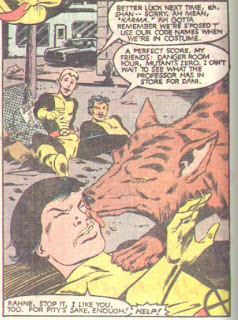 As Dani's turn approaches, she is overcome with fear and anxiety and flees the mansion. Rahne tracks Dani's scent into the woods, and the two girls discuss Dani's deceased parents and her frustration with her power. The rest of the New Mutants arrive, heading into town with Stevie, but Dani declines joining them, wishing to be alone. As the rest of the team departs, unknowingly followed by government agents, Dani returns to the Danger Room. Overcoming her fear, she does what none of the other students could do and passes her test. But just as she finishes, she's blasted from behind and knocked unconscious. When she awakens, she finds herself in the middle of the X-Men's dangerous training scenario.

Firsts and Other Notables
All of their characters receive their codenames this issue: Cannonball (Sam), Wolfsbane (Rahne), Sunspot (Roberto), Karma (Shan) and Psyche (Dani). Considering Xavier's insistence in this issue that the students aren't training to fight super-villains, it's unclear why he assigns them codenames, aside from genre-convention.

Gabrielle Haller, the Holocaust survivor whom Xavier healed and then romanced in the flashback of X-Men #161, makes her first appearance in the present. Though he goes unseen, this is also the first reference to the character who will be known as Legion, as Gabrielle seeks out Moira's help with her autistic mutant son, who also happens to be Professor Xavier's son. 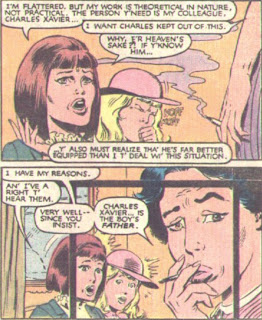 This is the first time we see the upgraded-with-Shi'ar technology Danger Room, as it is now capable of generating holograms and complex training environments.

Dani mentions dreaming of her parents dying fighting a massive bear; this is the first mention of the titular character in the "Demon Bear Saga" story which runs in issue #18-20.

Sam mentions growing up with several sisters; this is the first reference to Sam's numerous siblings, several of whom will eventually become students of Xavier themselves. 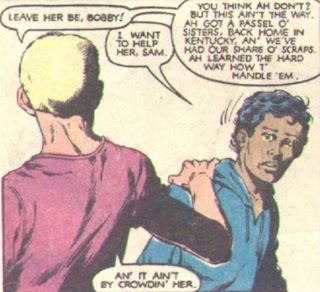 As you may have noticed from the cover date, we've jumped ahead a bit, for reasons detailed in the comments of last week's post. This issue shares a cover date with Uncanny X-Men #167, though it was actually on sale at the same time as issue #166.

A Work in Progress
Kitty's dance instructor, Stevie Hunter, has joined the school to serve as the New Mutants physical education teacher.

Roberto hams it up, kissing Rahne's hand, prompting the sheltered girl to wonder if that means Roberto likes her. 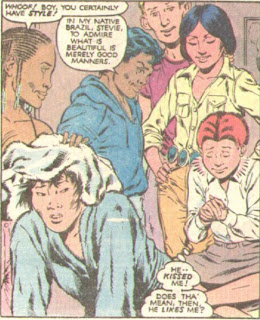 Dani mentions that she was living in Wyoming before Xavier brought her to the school; in MGN #4 it was said she was in Colorado.

Illyana is in England, meeting Gabrielle Haller with Moira.

Dani finds her way into Storm's attic, and spends the rest of the day caring for Storm's plants. The staff and dagger Storm was seen wielding when she was poising as a goddess in Africa when Xavier first recruited her, as seen in Giant Size X-Men #1, can be seen hanging on Storm's mantle. This presumably means that, despite believing them dead, Xavier moved all their stuff back into their (new) rooms after the mansion was rebuilt. 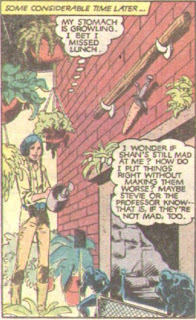 We also get a refresher on Shan's backstory, established in her first appearance in Marvel Team-Up #100, in which her father is killed as the family fled Vietnam, her mother is captured by pirates and Shan must fight to save her little brother and sister, thanks to Dani accidentally pulling the images from her mind.

When the New Mutants believe a monster from the Danger Room is attacking them, Sam immediately takes charge, issuing commands to get the Professor and the girls to safety while he holds off the creature.

Rahne and Dani's friendship continues to grow, as Dani confides in Rahne about the premonitions she had before her parents' and grandfather's deaths, as well as her growing frustration with her power, which she feels only causes harm.

Claremontisms
A couple times Roberto says, "...in my native Brazil...", "in my native ___" being a recurring Claremont phrase.

They're Students, Not Superheroes
Professor X specifically tells the New Mutants he is not training them to be the new X-Men, and that they are being trained in combat only for self defense purposes, not to battle super-villains. 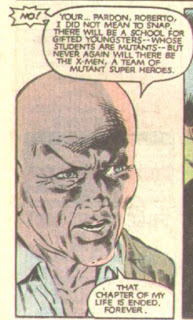 Human/Mutant Relations
Henry Peter Gyrich, one time Avengers liaison and current head of the governments anti-mutant Project: Wideawake (established during the epilogue to "Days of Future Past" in X-Men #142), is shown to have the New Mutants under surveillance.

Bob McLeod on designing the New Mutants"I always liked Cannonball the best. I tried to give all the mutants distinct body types and characteristics, and with his big ears and lanky frame, he was the most fun to draw. I tried to make all the characters individual sand fun to draw, though. I made Rahne short hand full figured, and Dani taller and more flat chested. Roberto was short but muscular."

Teebore's Take
Following their "pilot episode" in Marvel Graphic Novel #4, Claremont and McLeod debut the New Mutants series, and the analogy continues, as this reads very much like the first post-pilot episode of a TV series, re-introducing the characters, the setting, and the purpose of the title, while, in true Claremont fashion, setting up a number of plot threads which will payoff in varying degrees in the future. Though the focus in this issue is primarily on Dani, we're once again given a clear picture of each of the characters' emerging personalities: Dani is a hothead, Sam is overeager, Roberto is a smooth ladies man while Rahne remains naive and sheltered, and Shan has a dark past. Most interesting, however, is the fact that in the first issue of a new superhero series spinning off from X-Men, no super-villains appear at all; the action all comes from the team using their powers in the Danger Room. While the conventions of the genre won't allow that to continue forever (or even for long, with a super-villain of sorts appearing next issue), it's worth noting that Claremont was committed enough to the idea of the New Mutants as students first and superheroes second to resist the urge to create an arch enemy for the team and drop him or her into the first issue of their ongoing series.

Next Issue
The New Mutants go to the mall in New Mutants #2, while the X-Men face their impending deaths in Uncanny X-Men #165.
Newer Post Older Post Home
Posted by Austin Gorton at 9:30 AM