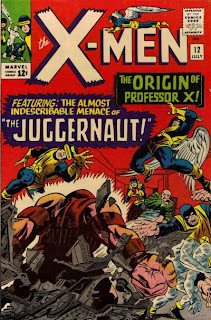 Plot: As Cerebro warns of an approaching menace of phenomenal power, the X-Men work to fortify the mansion. As the mysterious menace easily surpasses one defense after another, Professor X tells the X-Men of his childhood and his bullying step-brother Cain, who grows up to discover the Ruby Gem of Cyttorak, granting him the power of a Juggernaut. It is, of course, Juggernaut who is bearing down on the X-Men, and after overcoming the final defense, easily wipes the floor with the X-Men themselves before coming face to face with Xavier.

Firsts and Other Notables: This is the first appearance of Juggernaut, a mainstay of the X-Men's rogues gallery. His sheer power and personal connection to Professor X make him a ripe target for reuse, either alone or in cahoots with other villains. He even joined the X-Men for a brief period time, in a storyline that was the sole bright spot of Chuck Austen's otherwise abysmal run in the early 00s.

Professor X's origin is detailed for the first time, alongside Juggernaut's, including the revelation of his first name: Charles. His father, Brian Xavier, was a scientist at the Alamogordo Nuclear facility along with Kurt Marko. Xavier believes his father's exposure to radiation at work accounts for Xavier's mutation. When Brian Xavier dies in an accident, Kurt marries his widow, Sharon, becoming a young Charles Xavier's step-father. Around the time she realizes he just married her for her money (Brian Xavier's fortune) Kurt's boorish son Cain comes to live at the mansion. Years later, after Sharon has died, Kurt, Cain and Charles get involved in a fight after Cain falsely accuses Kurt of arranging the accident that killed Xavier's father, which ends with Kurt saving the boys from a fire. Cain and Charles grow up together as antagonists, eventually serving together in the Korean War. In Korea, Cain deserts while under fire and Xavier gives chase. They comes across a hidden cave containing the mythical lost temple of Cyttorak and the Cyttorak Ruby. Touching it bestows the awesome power of the Juggernaut upon Cain, though shortly thereafter the cave collapses, trapping him inside.

Brian Xavier and Kurt Marko's work at a nuclear facility in Alamogordo, as well as the indication in this issue that Kurt knew Xavier would develop super powers eventually (suggesting there was some kind of experimentation/study of mutation going on there) proves to be fertile ground for flashback stories dealing with Xavier and the rise of the modern era of mutants in the Marvel Universe. Mike Carey recently completed such a story involving Brian Xavier, Kurt Marko and Mr. Sinister in the "X-Men: Legacy" book.

Jack Kirby is on his way out, as he only contributes layouts to this issue, leaving the actual pencilling to Alex Toth, making this the first issue of "X-Men" not drawn by Kirby.

Also, this is the first true two-part "X-Men" story, as it ends on a solid "to be continued!" cliffhanger for the first time. 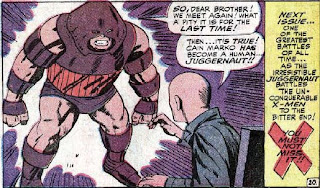 A Work in Progress: The other X-Men learn about Cerebro. I'm not entirely sure why Professor X kept it a secret from everyone but Cyclops.

Cerebro only detects mutants, and Professor X makes it very clear several times that Juggernaut is not a mutant, yet Cerebro spends much of this issue freaked out by Juggernaut's approach, an approach about which it shouldn't even be aware.

Marvel Girl's telekinesis is referred to as "teleportation" again.

During the retelling of his origin, Professor X says he survived a car crash by "creating a mental shield around me." Which is telekinesis, not telepathy. 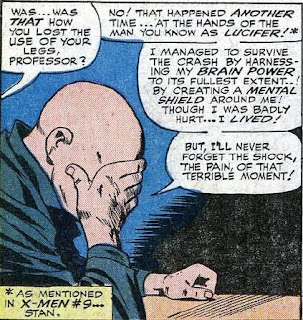 It takes the X-Men exactly five minutes to use their powers to "completely fortify and booby-trap" the exterior of the mansion. Needless to say, Juggernaut encounters far more fortifications than we ever see the X-Men setting up.

Professor X's father was killed in the accidental blast of an atomic bomb. 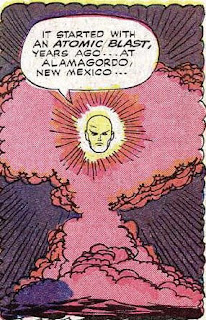 The X-Men employ a gas against Juggernaut which causes a loss of balance.

"Professor Xavier is a Jerk!": A teenaged Professor X decides it's unfair to compete in athletic events because his telepathy gives him an unfair advantage over his opponents, but only after becoming the star quarterback and winning a shelf's worth of trophies. Also, he never seems to consider simply NOT reading his opponents' minds. 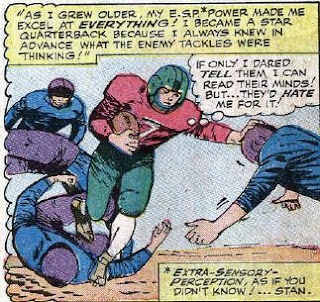 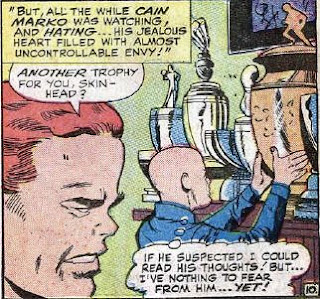 Young Love: No time for loving as the Juggernaut approaches.

It's in the Mail: Here's a missive that would be right at home on a modern message board, picking some nits regarding the assortment of dinosaurs and other prehistoric creatures found in the Savage Land in issue #10. 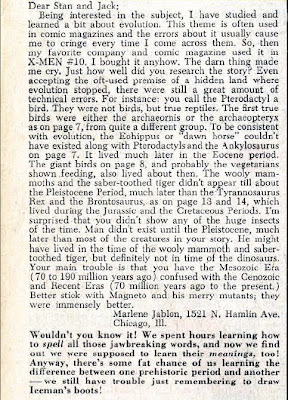 For Sale: Not only could the kids of the 60s buy sea horses mail order, apparently they could get pet monkeys that way too. That just doesn't seem quite...right.

X-Men T-shirts are finally available! And have you joined the MMS yet? 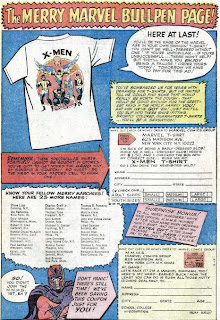 Teebore's Take: A suitably suspenseful story, as Xavier's shrill declarations of Juggernaut's power are backed up by the scenes of a shadowy figure easily shrugging off the best the X-Men can throw at him, slowly drawing closer and closer to Xavier until coming face to face with him at story's end.

It does suffer a bit, however, from Silver Age style plotting, as Xavier insists on recounting his entire history in a long-winded, linear narrative, refusing even to name the approaching threat as Juggernaut until his flashback first sets up the dramatic reveal. At one point Iceman even asks him point blank exactly what kind of power their foe possesses, and Professor X insists there's "no time for that now" before proceeding to watch Juggernaut break through their first defense, then return to his origin tale to discuss the death of his mother and inheritance law. Later, as Juggernaut defeats the last booby trap, Xavier suddenly remembers one last defense, a steel inner wall. Despite Juggernaut bearing down on them and time being critical Beast, Iceman and Angel proceed to dabble in some horse play as they race to be the one to raise this final defense.