A Rainy Sunday at Microcon

Microcon was held a few Sundays ago at its now-usual venue at the State Fair's Progress Center. I'm not sure if the steady rain kept people in or kept them away, but it was a mad house inside, at least for the two hours or so I was there. If the show keeps growing at this rate, it'll soon outgrow the Progress Center. As it was, I have nothing but sympathy for the creators, dealers and volunteers that had to manage the throng of people all day.

In my zeal to get out the door early and pick up my brother, I managed to forget my camera and my want list (which made shopping a little trickier and more memory-based) so no fun pictures. Needless to say, the costumed folk were out in force once again, from MCBA's regular Superman to a full compliment of Star Wars characters, including a neat looking Clone Trooper in and amongst all the Stormtroopers, and an impressive Jango Fett.

Arriving shortly after the doors opened my brother and I, slightly soggy, made a beeline for the Half Price Books table. My brother was looking to pillage their discounted Manga inventory as he had done at Fallcon last year. In moments, he had dropped fifty bucks on $300 worth of Manga. While he ravished the Manga, I picked up this little gem for $3.00: 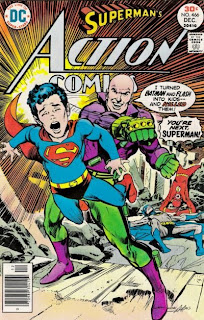 I have no idea what this comic is about, but the cover features Lex Luthor sucker punching a pre-teen Superman in the back, and that, my friends, is worth three dollars.

While my brother lugged his sack of books to the car, I made a lap of the floor. I wasn't planning on buying any graphic novels, since my local comic shop was having a big sale the following weekend, in which all books would be 50% off, which is about as good a deal as I can find anywhere. However, I caved for one 1/2 off Showcase that I knew my LCS didn't have in stock: Batman and the Outsiders. 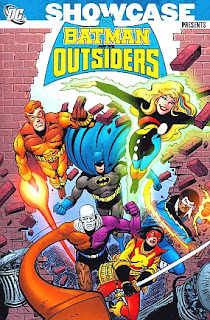 This early 80s book featured Batman quitting the Justice League (because they wouldn't help out a colleague of Bruce Wayne, who was being held captive by an enemy country) and reluctantly forming his own team of "outsiders" to help him. I was introduced to the humorous crappiness of the stories and the gorgeous Jim Aparo art by Siskoid's hilarious page-by-page analyses a while back, and have wanted to continue reading the series since.

With my recently-updated want list sitting uselessly on my desk at home I had to rely on my memory to make any comic book purchases, which meant, for the most part, hitting the broad strokes of my collection, things like X-Men and Avengers, for which I know by heart the issues I still need, and avoiding diving into bargain boxes for quarter comics.

I did manage to find a copy of Flash #54 for fifty cents, an issue Dave Campbell raved about way back when that I've kept my eye out for ever since, so I could experience the fun myself. 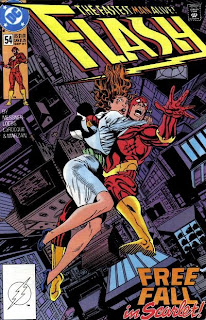 Then I picked up two issues of Iron Man, #98 and #99, that were old enough that I knew I didn't have them yet. 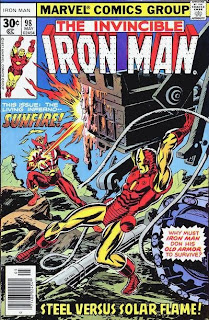 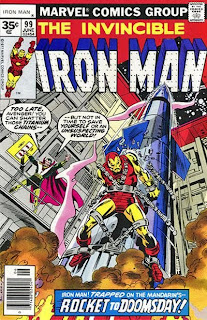 Usually, I like to methodically work my way backwards through my acquisition of X-Men and Avengers comics, purchasing, for example, issue #95 before #94, and so on. But this time I found plenty of good deals for issues all over the range of my want list that I threw that notion out the window. 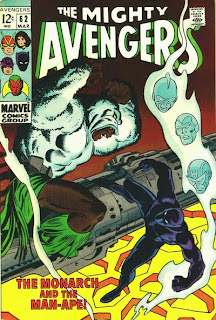 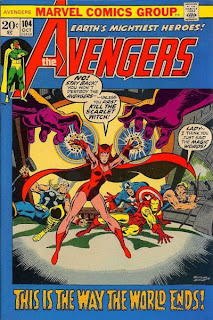 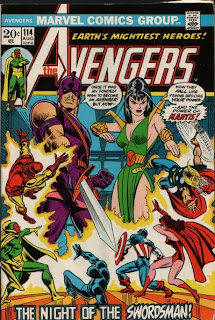 Apparently, I've exhausted the stock of my usual dealer for late 70s X-Men comics, as he didn't have any issues I don't already have this year. But I still managed to add two more issues of X-Men to my collection, #74 and #84: 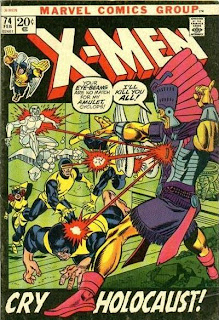 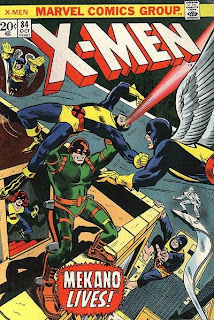 These are all from the "reprint" period of X-Men's publishing history, in which low sales had led the book to being canceled for a time before it was brought back simply as a place to reprint older stories. Despite the lack of original content, at $8 an issue, these were a steal.

And that was the end of a soggy, quick-and-dirty Microcon for me. As usual, more than anything it simply whetted my appetite for Fallcon in October.
Newer Post Older Post Home
Posted by Austin Gorton at 5:11 PM