AKA: Marge goes crazy thinking Otto's ex-fiancee is trying to kill her and usurp her position in the family.

The Setup: After Bart offers to host Otto's wedding at the Simpson home, Marge inadvertently talks Otto's fiancee, Becky, out of marrying him and she ends up living with the Simpsons.

Wiggum: I don't know, Simpson. How do I know you didn't cut your own brakes?
Marge: Why would I do that?
Wiggum: I don't know ... get some attention from a handsome police officer?
Marge: That's crazy. Look, I know I don't have any proof, but this woman *is* trying to kill me.
Wiggum: Fine, let me tell you what I tell everybody who comes in here: the law is powerless to help you.
Marge: Do I have to be dead before you'll help me?
Wiggum: Well, not dead -- dying.

Lisa: Poor Maggie. How many insanity hearings have you been to in your short little life?

Lisa: Oh, I really miss Mom.
Bart: The kids are saying if you say "bloody Margie" five times, she'll appear, but then she gouges your eyes out.
Homer: I hear she mates with men, then eats them. 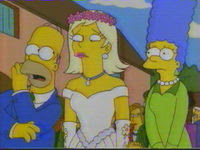 Teebore's Take: Well, it's a Marge episode, most of which tend to be pretty mediocre, at best. This is no exception. The plot is fairly straight-forward (if terribly contrived) and there's some funny bits scattered throughout, but there's not much to get too excited about. In fact, for whatever reason, this is one of those episodes I routinely forget about. Then I watch it again, say "oh yeah, this one" then promptly forget about it again.

Marge's transistion from "jealous of Becky" to "thinking Becky is trying to kill her" is pretty far-fetched. As is most of the third act, featuring Marge's various attempts to evade the police and prove she's not insane.