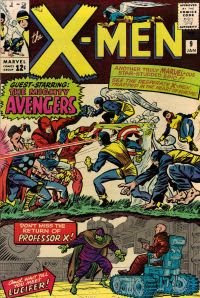 Plot: The X-Men arrive in Europe at Professor Xavier's request. Xavier has located the lair of Lucifer. Xavier is captured and learns that Lucifer has wired his heart to an enormous bomb that will explode if Lucifer's heart rate stops. The Avengers arrive on the scene, having followed emanations of evil that Thor's hammer sensed, determined to defeat Lucifer. Professor X telepathically warns the X-Men they must stop the Avengers from harming Lucifer, but can't explain further. So the X-Men and Avengers fight, with the Avengers more or less taking it easy on the teenaged X-Men. Meanwhile, Professor X manages to knock Lucifer out without disturbing his heart rate, and he explains everything to Thor. The Avengers vote (literally) to leave Lucifer to the X-Men and depart. Cyclops and Professor X work together to diffuse Lucifer's bomb, then let him go.

Firsts and Other Notables: Lucifer makes his first appearance. He's referred to as human, but later stories establish he's an alien doing recon work for his race's planned invasion (the same race to which Dominus, a similarly one-note West Coast Avengers villain, belongs). Like many non-Brotherhood villains from this era, he never really catches on, which is problematic for reasons I'll get into below.

Professor X says Lucifer is responsible for putting him in a wheelchair, but doesn't elaborate (he will in issue #20).

The X-Men and Avengers meet (and fight) for the first time. The Avengers are the first real high profile guest-stars to appear in the book. The two groups go on to share a unique relationship, born of their similar publishing history (both titles began in September 1963) and character connections (Quicksilver and Scarlet Witch leave the Brotherhood to join the Avengers, bringing the X-Men's mutant- and Magneto-related baggage to that title) making this issue notable for the start of that relationship.

A Work in Progress: A narrative caption states only Professor X and Magneto are capable of astral projection. This turns out to be wrong on a number of counts.

Ah, the Silver Age: The X-Men meet the Avengers and proceed to fight them before the entire situation is made clear, because that's what Marvel heroes did in the 60s.

The X-Men travel from New York to Europe (the story can't decide if it's somewhere in the Balkans or Bavaria) via a cruise liner. 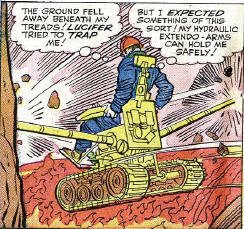 In a scene clearly designed to illustrate everyone's powers for first time readers, Jean telekinetically places a log over a hole she's about to step into because she doesn't have the time to stop running...but she does have the time to say as much before putting the log in place. Also, did she really need the log? The hole isn't that big. 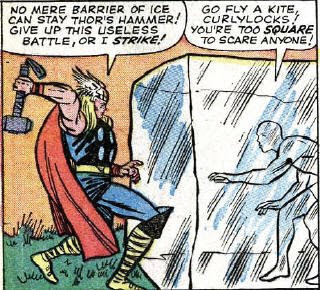 The Avengers love their parlimentary procedure. After the Avengers learn about Lucifer, they call off the fight with the X-Men and vote to leave him for the X-Men to handle. I'm sure the X-Men appreciate the Avengers respecting their turf, but at the same time, I don't think the X-Men would mind the Avengers' help in defeating the villain with an apocalyptic bomb ready to explode... 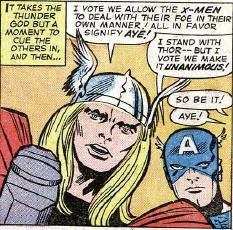 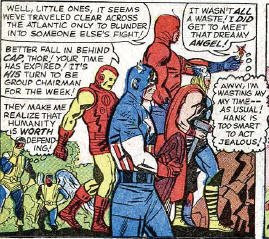 After defeating Lucifer, the X-Men let him go because "we X-Men are pledged never to cause injury to a human being" (but the Blob gets beat up for refusing to join the team). Um, yeah...I know that villains usually "get away" in the Silver Age, but that's the lamest excuse for it I've ever heard.

Young Love: Jean wants to comfort Cyclops with her lips. Easy there, Jeannie: this is an "all ages" comic. She believes if they were all ordinary humans, they'd be "free to follow the urgings" of their hearts. 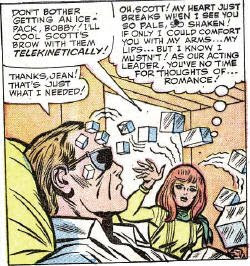 Wasp pretends to be enamored of Angel in an attempt to make Giant-Man jealous. It doesn't work.

The Awesome and Terrible Power of Cyclops: In the midst of this little love-fest, Professor X proclaims Cyclops disarming Lucifer's bomb his "most glorious moment." I still think he'd rather be comforted by Jean's lips. 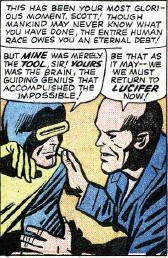 I think they're going to make out.

It's in the Mail: The ongoing debate about Quicksilver and Scarlet Witch's loyalties rages on. A few letters are complaining that the Brotherhood are overexposed, including this one, whose author has come up with a hilariously exact number for how often a villain should appear. 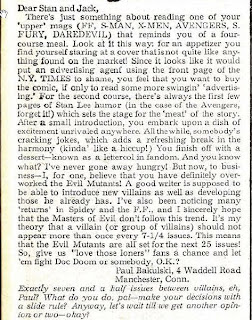 Apparently, Marvel used to send a response card to everyone who wrote them a letter. I never knew that.

And here are the results of X-Men's reader mail poll. 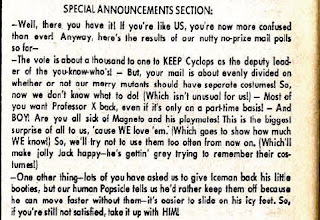 Teebore's Take: Lucifer's role in Professor X's origin has always been troubling. It seems only logical that whomever caused Professor X to spend his life in a wheelchair should be someone of some importance (Magneto seems a blisteringly obvious candidate, though their shared history hadn't been established yet). Instead, this place of significance in the X-Men mythos is held by Lucifer, a one-note villain whose motivations are never made clear until he's later revealed to be a conqueror from a relatively trivial alien race. Not a lot of mythic weight to that.

Granted, Stan Lee couldn't have known how popular and long-lasting the X-Men would become, and we can look back on this reveal with the benefit of hindsight and 40+ years of stories to declare it lame, but he should have realized this pivotal element of Xavier's origin deserved something special. And let's face it, cover hyperbole aside, Lucifer is no Dr. Doom. Heck, Lucifer is no Unus the Untouchable; at least he's a mutant.

Beyond that, this issue has little going for it beyond the novelty of the X-Men/Avengers confrontation. It's never made clear (either in this issue or via the subplots setting it up in the previous two issues) why Professor X chose to go after Lucifer at this exact time, nor why he suddenly needs the X-Men now whereas before he was content to work alone. In the end, their only contribution to the story is to delay the Avengers, who didn't arrive until after the X-Men, and to help defuse a bomb Xavier didn't know about until after he summoned them. Lucifier's ultimate plan or goals go unmentioned; the main threat of the issue, his enormous bomb, is a defensive measure, meant to destroy the world in the event of his death, giving no indication of what he hopes to accomplish in the meantime.

And of course, there's that ending, in which the X-Men let Lucifer walk away while standing next to a defused bomb with which he threatened to destroy the world.

But it does have Iceman calling Thor square.