Five Things I Love About "The Phantom Menace" 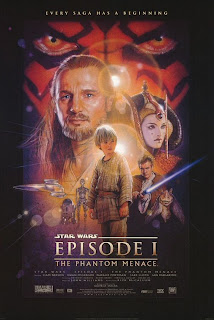 This week (yesterday, in fact) marks the tenth anniversary of "The Phantom Menace." Yes, believe it or not, it's already been ten years of hating Jar Jar and mocking tween Anakin. To celebrate (and in the interest of keeping things positive) here's five things I love about the weakest Star Wars film. 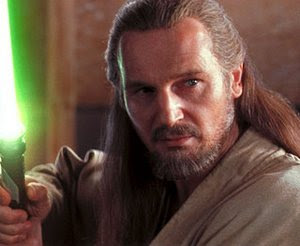 Qui-Gon Jinn: "The Phantom Menace" showcases, perhaps, the purest Jedi ever in Liam Neeson's Qui-Gon Jinn, a Jedi who kicks butt, takes names, and does whatever the Force asks of him, regardless of what policy or procedure or politics suggest he should do. There's also a bittersweet tragedy to his character, considering everything he does in this movie indirectly leads to the extermination of the Jedi for a generation. 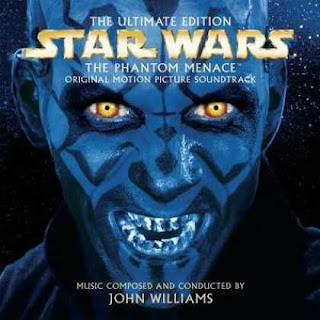 The Music: Note for note, "The Phantom Menace" is arguably John Williams most accomplished score of all the Star Wars films (and, thankfully, ever second of it is available on CD; now where are my complete music compilations for Episodes II and III?). One could probably turn off the dialogue and simply watch the movie with the music and still get the same impressions from the story (in fact, in some scenes, the lack of dialogue would be a drastic improvement). From the seemingly sweet "Anakin's Theme" that subtly includes the ominous notes of "The Imperial March" to the epic "Duel of the Fates" which becomes the prequel trilogy's overriding theme in the same way Luke's theme defines the original trilogy, to the finale, which reprises the Emperor's theme from "Return of the Jedi" (sung higher and up tempo by a children's choir), the music of "The Phantom Menace" foreshadows what will come while establishing a musical identity for the entire prequel trilogy. 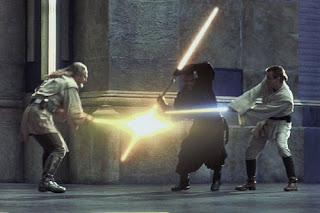 The Lightsaber Duel: Everyone knows the coolest thing about the Star Wars movies are lightsabers. So it's no surprise that the the most exciting part of "The Phantom Menace" was the intense lightsaber duel at the end between Obi-Wan, Qui-Gon and Darth Maul. Seeing, for the first time, a lightsaber fight that didn't involve old Jedi, half-trained Jedi or injured cyborg Jedi was the highlight of the film for me ten years ago, and a key element in bringing me back to watch it again and again.

The Jedi Council: Like Qui-Gon's action throughout the film, the Jedi Council helped define the concept of the Jedi for the prequel trilogy, giving the audience a glimpse of what life for the Jedi was like before Anakin went nuts and killed all their kids. Little did we know when Luke was getting zapped by a training remote aboard the Millenium Falcon, that once upon a time the Jedi were all about bureaucracy, complete with a ruling council and a space pope. While the council really didn't do much in "The Phantom Menace," the idea was visually and thematically significant, and it was fun to watch all those various Jedi and wonder what each of them did to earn a place on the council.

The Senate Chamber: Created on screen almost exactly as it was described in Star Wars novels written prior to "The Phantom Menace", the Senate chamber's vast scope and collection of aliens perfectly conveys the way a multi-world legislative body would operate.

(And yes, I'm citing the freaking Senate Chamber as something to like about "The Phantom Menace." This is the least of all the Star Wars films, after all. It can be difficult to find things beyond the music and "some Jedi finally kicking ass" to love about it.) 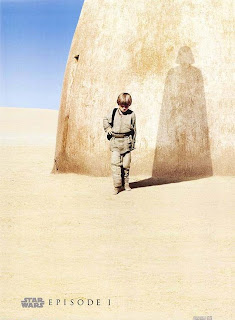