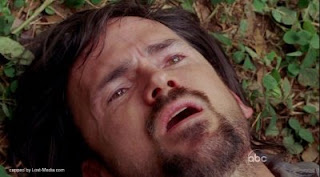 A title like "The Variable" suggests a relationship to "The Constant," Lost's classic season four episode which elaborated on the nature of time travel on Lost, concluding with the emotionally stunning long-distance reunion of Desmond and Penny. This episode shares themes with that one, but, Daniel's crushing, fatalistic death aside, it lacks the emotional punch of "The Constant." This is most likely due to its placement in the season as a whole: while "The Constant" aired early in season four, as the mystery of the freighter and its intentions was still unfolding, this episode falls near the end of this season. Thus it must spend time servicing the plot as it ramps up for the conclusion, shattering, once and for all, Sawyer and company's idyllic Dharma existence while counting down to the ominous Incident that threatens all life on the island. Which isn't to say there wasn't plenty to like about "The Variable"; just that it wasn't the stark counterpoint to "The Constant", structurally or emotionally, that it was touted to be.

Daniel's new found belief to the contrary, it still seems that whatever happened, happened. By trying to change the future, Daniel brought himself to the place he was always destined to end up: dead at his mother's hand. What are the chances that his spiel to Jack about preventing the Incident and keeping their plane from crashing will lead to Jack performing the very actions that cause the Incident in the first place? Perhaps this was Daniel's intention from the start: to con Jack with a spiel about free will and changing the future in order to ensure he performs his written role in upcoming events.

Despite his apparent death, Daniel's story doesn't seem to be quite over. There's still the 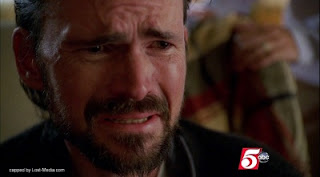 question of why he was so moved by the discovery of Flight 815. It's been theorized that at some point in his experiments he consciousness-traveled to a time in which he learned the fates of those individuals, then forgot the details but remembered the emotion when he saw the news footage, but some confirmation of that theory or an alternative explanation is in order. His time in Ann Arbor in the seventies is also cause for question: if is stance on free will vs. fate as changed, what happened there that leads him to believe that "variables" could account for changing the timeline? What led him to make the connection between Ellie, a gun-toting woman vaguely familiar to him in 1954, and his mother? Finally, there is the matter of his journal: where did that info come from, particularly the specifics of events in the seventies: he knew when Chang was going to arrive at the Orchid, and he knew, after consulting his journal, that Chang was Miles' father. Is that information a time loop, in which Eloise retrieves his journal after his death in 1977, then feeds that info to him as he gets older, so that he has it when he arrives in the 70s so Eloise can get it? Or did he get that info while testing his time travel experiments on himself? Either way, it seems that, like many characters on Lost, Daniel's story won't end with his death.


Favorite Bits:
Daniel's direct and straightforward answer to Dr. Chang about how Daniel knows what's going to happen. Simply telling Dr. Chang the truth, that he's from the future, is, perhaps, the most directly-answered question on Lost, ever. 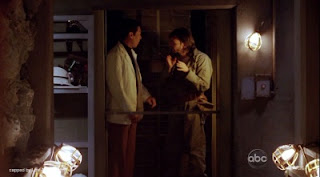 Ms. Hawking's reaction to Penny believing Ben was her son.

Tidbits of Note:
Theresa, the woman Daniel's with at graduation, is the woman Desmond visited in "Jughead." 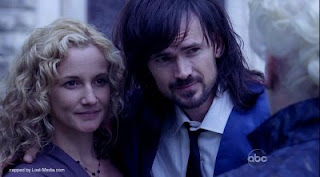 4 hours 'til the Incident.

The code to the sonic fence, if I remember it correctly, was 14171. Make of that what you will.

Sawyer's nicknames are back; I particularly enjoyed "HG Wells."

When a decision needs to be made, Sawyer asks the group to vote; Jack usually just told everyone what to do.

I think Daniel changed jumpsuits at some point: when he arrived on the sub, he was wearing the black Swan jumpsuit, but when he went out to the jungle with Jack and Kate, he was wearing a gray jumpsuit with a generic Dharma logo on it.

While visiting Daniel, Widmore picked up an issue of Wired. JJ Abrams is the guest editor of this month's issue.

Widmore admitted to faking the Flight 815 wreckage. Unless he was lying. But I don't really see why he would have, at that point. 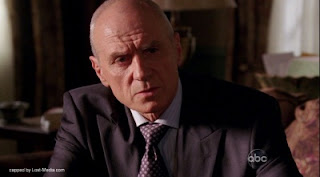 Now we know why, despite his apparent memory problems off the island, Daniel seemed so with it on the island: it was healing him. It also explains the memory card game he was playing with Charlotte last season: he was testing to see how healed he was.

Young Charlotte tells Daniel that she's not allowed to have chocolate before dinner, which were adult Charlotte's last words to Daniel before she died. 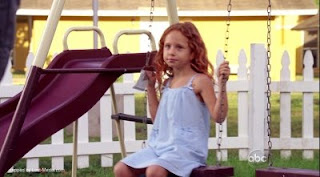 Anyone else get worried when Penny left little Charlie in the care of some random nurse? If I were her, after everything that's happened, I wouldn't let the little goober out of my sight.

So Daniel is Widmore's son, making his constant his brother-in-law. Some theorized that relationship after "Jughead" earlier in the season, but with no real evidence since then, that revelation was fairly surprising.

Questions:
What was it exactly about learning that Jack, Kate and Hurley had come back in time that spurred Daniel into action? Why does he think his mother lied about it being Jack's destiny to go back to the island? 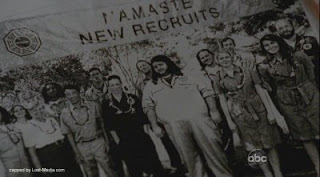 For that matter, we still don't know WHY Eloise wanted the Oceanic Six to go back, or why it would be so catastrophic if they didn't. Was she merely trying to make sure things happened the way they were supposed to, as she'd spent her life doing to her son? Why does she so fervently believe in the "what happened, happened" doctrine, to the extent that she knowingly sends her son to his death at her hands? Who else is ready for an Eloise Hawking flashback?

Daniel's intentions seem conflicted: he tells Miles he's just trying to make sure Chang does what he's supposed to do, yet at the same time, he's trying to change things. Is Chang just a fail safe, in case he's wrong? Does he need Chang to evacuate everyone because Dan's planning on blowing up an H-bomb? What DOES Chang do, that he's supposed to do? Evacuate the island? Is that why young Charlotte and Miles leave?

Why did Radzinsky and his good squad arrive at the motor pool when they did? Weren't they supposed to be working at the Swan? They said they were coming from Chang's house-what brought them there?

Shouldn't Sawyer and Juliet (as well as most of the compound) hear the explosion Jack caused?

Why does Ms. Hawking no longer know what's going to happen? Is it because her knowledge of the future came from Daniel's journal, so she only knows what he knew up to his death?

Did Richard recognize Daniel when he walked into camp, having met and interacted with him 20 years earlier?

In addition to all the Daniel-related questions above, there is also the matter of last summer's comic-con video, in which Dr. Chang, clearly aware of time travel and certain future events, films a video warning people about the Purge. The voice of the cameraman sounds an awful lot like Daniel, and one point, Chang says something to LaFleur off camera. Baby Miles is also referenced, and heard crying. So when did Daniel film that video? Did it happen off screen during this episode? Did Chang somehow come to believe Daniel? Or does Daniel survive being shot by his mother, and go back to Dharma to make the video? Or was the video on the whole more promo than canon, unlike the previous comic-con Orchid video, which synched up nicely with the events of last season's finale?

Is Daniel truly dead? Did he really believe that "variables" could change the future, or was he still trying to keep history on track from the beginning?

Next week:
"Follow the Leader" has Jack presumably trying to pick up where Daniel left off while we check in with Locke and the rest of 2007. Oh, and Sayid is back! 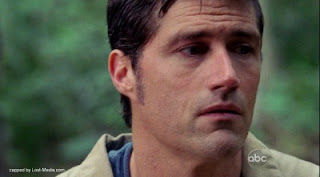