AKA: A lot of crazy crap happens after Homer kills an alligator while on Spring Break.

The Setup: Homer discovers his lifestyle will likely lead to an early death, causing a nervous breakdown, the remedy for which is a relaxing trip to Florida, which is, unbeknownst to the family, in the throes of Spring Break.

Doctor: What you need is a good, long rest. I suggest Florida.
Homer: Florida? But that's America's wang!

Bart: I'm getting used to this country life. Teacher says I'm whittling at a tenth-grade level.
Marge: And y'all hardly ever bicker any more.
Lisa: Too hot to bicker, I reckon.
Homer: You know, killing that gator was the best decision I ever made.
Bart: Got that right.
Marge: Dern tootin'
Lisa: Boy, howdy.
Homer: Yep, this place is great. And some day, when Lisa and Bart get married, it'll all be theirs.
Bart+Lisa: Yuck!
Marge: You mean when they marry other people.
Homer: Okay, but I ain't paying for two weddin's. 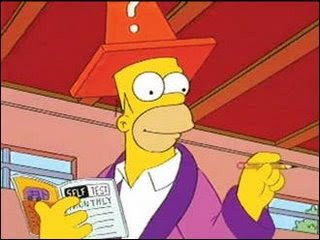 Teebore's Take: Whenever anyone mentions how zany "The Simpsons" had become by this point in its run, or how much of a jerk Homer is, or just how bad the episodes are, this episode always comes to mind as a prime example of all that. Per usual, the first third of the episode holds what little appeal there is, between Homer's breakdown and the trip to an intoxicated Florida. But even there, the episode falters, as Homer's antics at the MTV spring break party fail all attempts at humorously skewering youth culture. Instead, it's just Homer being an ass. After that, it's one over-the-top scene after another as the characters stumble through a nonsensical series of events.

From Homer "walking" out of the hotel while tied to a bed to the entire family (including Maggie) working on a chain gang, it's one unbelievable scene after another.

Homer is in top jerk-ass form, consistently making things worse for the family throughout the episode.
Newer Post Older Post Home
Posted by Austin Gorton at 8:54 AM