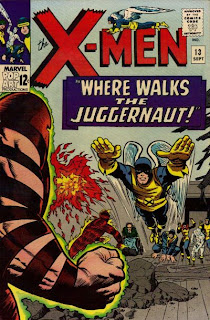 "Where Walks the Juggernaut!"
September 1965

Plot: The X-Men help Professor X escape from the Juggernaut, and fight a holding battle against him while Xavier feverishly builds a machine to augment his telepathy that he could have been working on last issue. While working on that device, he makes contact with the Human Torch, who arrives to help the X-Men defeat Juggernaut by removing his helmet, making him susceptible to Professor X's telepathy.

Firsts and Other Notables: Human Torch, of Fantastic Four fame, guest stars. He is initially reluctant to answer Professor X's call for help, as Mr. Fantastic warned him to be wary of trickery and possible attacks in light of Mr. Fantastic and Invisible Girl's upcoming wedding.

Daredevil (as Matt Murdock) and the Teen Brigade (a group of ham radio/super hero enthusiasts with which perennial sidekick Rick Jones hangs out) both make one panel cameo appearances as well. 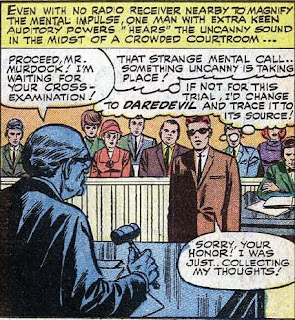 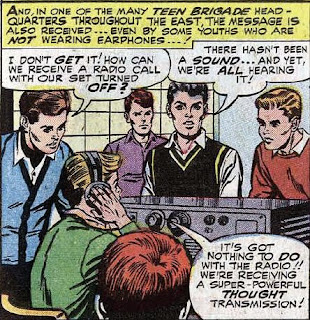 A Work in Progress: Juggernaut is defeated by forcibly removing his helmet, making him vulnerable to telepathic attack. This becomes the standard means of defeating him in the years to come.

Professor X believes that without his helmet, Juggernaut can be easily contained by the authorities. Um...the helmet just protects him from telepathic attacks. He's still a human juggernaut without it.

Once again, Jean's telekinesis is referred to as teleportation (though Stan does get it right later in the issue). 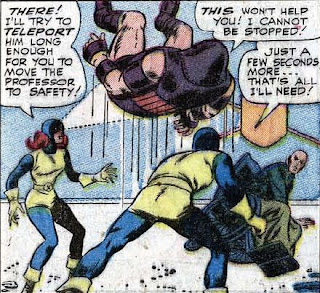 Ah, the Silver Age: Professor X hastily assembles a device which increases his telepathic powers while the X-Men essentially take a beating to buy him time. The device increases his power, but he's already SO powerful, he has to release some power...while waiting for it to increase his power. It frankly doesn't make a whole lot of sense. 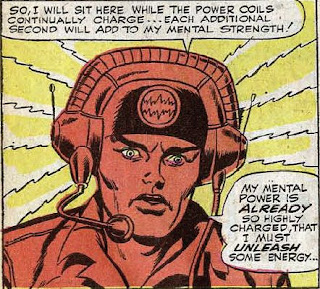 And, call me crazy, but if Professor X has the parts to make a machine that can increase his power, maybe he should have been working on that last issue, instead of yakking on about his childhood.

Cyclops blasts a surprisingly deep and even hole into the floor of the mansion. 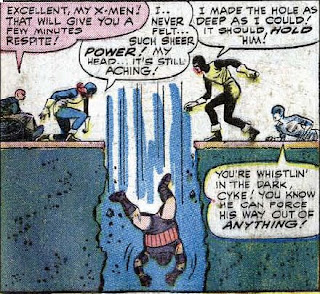 Juggernaut, when standing over defeated and unconscious X-Men, decides to trap Xavier first, then come back to finish them off. That's some classic Silver Age villainy right there. 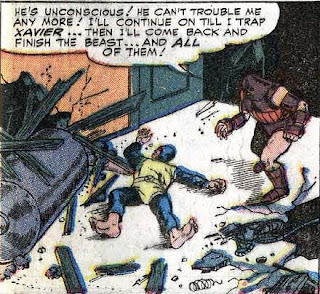 After the Juggernaut is defeated, Jean plays nurse to the injured male X-Men. 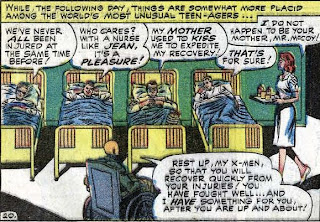 The Teen Brigade is a group of teenage ham radio enthusiasts. I bet they were the coolest teens around.

"Professor Xavier is a Jerk!": Professor X thanks Human Torch for his assistance by...wiping his memory of the event. 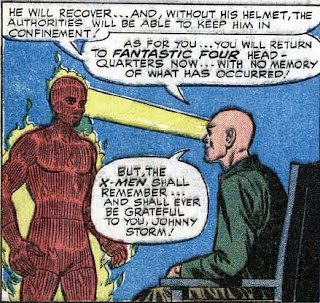 It's in the Mail: The clamor to bring back Magneto has begun. 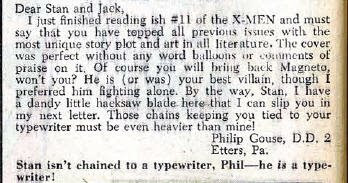 Teebore's Take: This issue is basically one long fight scene, but after last issue's buildup, it works. The story does a nice job of giving the X-Men a fighting chance against Juggernaut while still showcasing his immense power. The old "remove Juggernaut's helmet at all costs" schtick becomes standard fare eventually, but being used for the first time in this issue, it still seems fresh, and each member of the team manages to contribute to the outcome of the battle, even with Human Torch there to help.

All in all, an intense and exciting story for the book's first two-parter, though it does suffer thanks to the nature of Silver Age plotting.