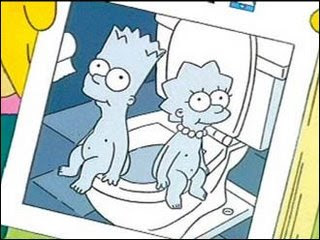 AKA: Barney swears off booze and sobers up.

The Setup: Homer and Bart discover a discarded Tiki statue when pillaging the town's garbage the night before it's picked up. After hooking it up to the gas line and wreaking havoc at the house, Homer flees to Moes.

Which is just to setup the fact that Barney is sad his friends forgot his birthday, until they show him a video of the party they threw him, which Barney was too drunk to remember. In light of this, he swears off alcohol.

Lenny: So I says to the cop, "No, *you're* driving under the influence -- of being a jerk!

Barney: I'm just saying that when we die there's going to be a planet for the French, a planet for the Chinese, and we'll all be a lot happier.
Lisa: Mr. Gumble, you're upsetting me.
Barney: No I'm not.

Barney: No it's not okay. I broke barstools, befouled your broom closet, and made sweet love to your pool table, which I then befouled.
Moe: Well, that would explain the drop-off in play. 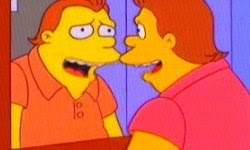 Teebore's Take: A comparatively character-driven episode notable for a rare continuity change: in all subsequent appearances (for a few seasons, at least), even when in the background, Barney will appear as clean cut "Sober Barney" as opposed to the more slovenly "Drunk Barney" (at some point, the decision was made to reverse this-I forget in what season exactly-but the change was, at least, acknowledged in an episode). Aside from that and the fact that Dan Castellaneta (the voice of Homer) and his wife wrote it, there's little else to say about this episode. Like many this season, it's fairly mediocre, with a few laughs along the way but nothing to get too worked up about it. The funniest bit is the bear escaping from the fire caused by Bart and Lisa's B-plot (in which they're trying to win a contest by taking an awesome picture for the cover of the Springfield phone book), but it's difficult to recreate in text.

Most of Barney's helicopter antics are pretty over the top, and the whole "Springfield Forest is on fire, must save the kids!" plot device is zany as well as cliche.

While Homer shows a lack of support towards Barney's desire to sober up, he does get his come-uppance later when he becomes "the drunk" at Moe's in Barney's place, and he does (drunkenly) help Barney rescue Bart and Lisa. 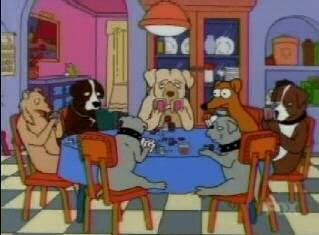