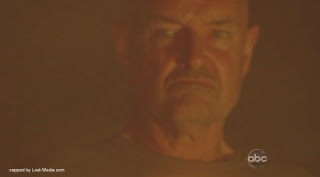 That was dense, intense, satisfying and infuriating.

Where to begin? Finales on this show are always difficult to unpack: they cram in so much, resolving the season past and setting up the season to come. This one, being the final season finale (next year's will be a SERIES finale, natch) did a whole lot of both.

So Jacob isn't Jack, or Locke, or any other temporally-displaced Lostie trying to do right, as many theorized and some hoped. Turns out he's just a dude, seemingly ageless like Richard, locked in some kind of struggle with a nameless, hairy other, weaving the threads of a tapestry like he does the lives of the Losties. In flashbacks, Jacob visited almost all the Losties in some capacity, bestowing a gift to each of them (Kate's lunchbox, a pen to little Sawyer, life to an injured Locke), at the very least making a point to physically touch them all. Jacob wasn't what was expected, but his story remains curious and compelling. It seems likely, despite his death, that he will take the front seat of the narrative next season after driving from the back seat for so long.

In 1977, Mad Jack got his bomb, Richard removed the Others from the messy situation, and 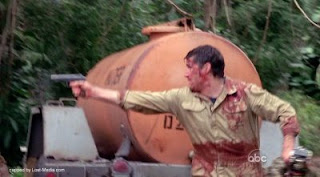 Sayid got (fatally?) shot on the way to the Swan. All the time-tossed Losties converge there, all on board (though for some, reluctantly) with Jack's crazy "kill 'em all and let destiny sort it out" plan, and a good old fashioned shootout occurs. Like the season one finale, with the hatch blown open to show nothing but a gaping maw of darkness within, this season ends with its biggest question unanswered: did whatever happened, happen, or was Juliet's desperate deathbed detonation of Jughead's guts a variable that has drastically changed the future? (Personally, I think "The Incident" showed us just that: the incident. Begun when Radzinsky's drill struck the pocket of energy and capped off by Jughead, what happened, happened, and the resulting flash of light and burst of energy will hurtle the Losties into 2007. After all, as Jacob said on his deathbed, "they are coming.")

Back in 2007, Ilana opened her silver crate and it turned out Locke's been dead since last season's finale. Didn't see that coming (though Dr. Bitz uncannily pegged that Locke's body was inside the crate). Apparently the confident and smiley Locke (or perhaps that's 'cocky and smirky' Locke) striding through the jungle this season has actually been a manifestation of Locke, some other entity taken his form in order to exploit a "loophole" in the rules governing (protecting?) Jacob. Presumably, this Locke-usurping entity is the hairy man in black seen with Jacob observing the arrival of a sailing ship (the Black Rock?) while sitting in the shadow of the statue. Assuming everything Locke has done since arriving on the island has been orchestrated by this anti-Jacob (and that Jacob is a benevolent being in tune with the island's needs), Locke has been recast as an unknowing chump, helping give rise to a dark force while all the while believing he was communing with the island and fulfilling a grand destiny. Which, more so than Juliet's fate or the dangling question of the timeline's state, is the most unsettling and nagging idea to come out the finale. 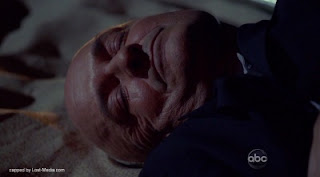 Favorite Bits:
The look on Sawyer's face at the end of the first hour, as he, Juliet and Kate were blocking the road. 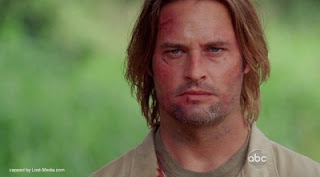 Jack and Sawyer's rumble in the jungle. That felt good.

Miles finally pointing out the notion that maybe everything Jack's doing is exactly what's always happened.

As asinine as I still think Jack's whole "blow up the H-bomb" plan was, the shootout at the end, with all the Losties coming together to fight off Dharma, was pretty cool. Plus, weaselly Phil+rebar=awesome. Felt bad for the Dharma guys who were just doing their job and got shot though.


Tidbits of Note:
Jacob's loom calls to mind images of the Norse Norns and the Greek Fates, beings who manipulated the length, weaving and use of thread as a metaphor for mortal life. 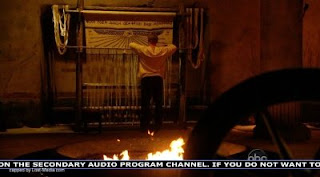 It's probably safe to assume the ship sailing by the island, observed by Jacob and that other guy in the cold open, was the Black Rock.

EVERYTHING about Jacob in that scene was white: his clothes, the tapestry, the sand on the beach, whereas his companion was clothed in black. If that's not an indication of good/evil, it's at least pointing out a dichotomy between the two. 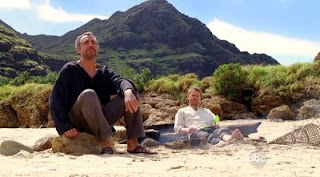 For those that don't remember their bible stories, Jacob is the son of Isaac (who was once almost sacrificed by his father, Abraham). Esau is Jacob's twin brother, and was in line for the birthright of their father. Jacob tricked his father into giving it to Jacob instead (mainly by pretending to be hairy) which pissed off Esau for awhile. Jacob then went on to wrestle God and thus be renamed "Israel" before fathering Joseph, who eventually got a multicolored coat, turned Mormon, and moved to Egypt. Which is why all the Hebrews were slaves there when Charlton Heston showed up.

The lunch box young Kate tried to steal and Jacob later bought for her was the one she and her childhood friend Tom buried in their time capsule (along with the toy plane), shortly before Kate inadvertently killed Tom while attempting to visit her mom. I assume the boy aiding her theft was Tom.

Depending on how you want to look out, Jacob is either inadvertently responsible for Nadia's death or for saving Sayid from sharing her fate.

I'm 98% confident that Rose and Bernard are the "Adam and Eve" skeletons found in the cave back in season one. 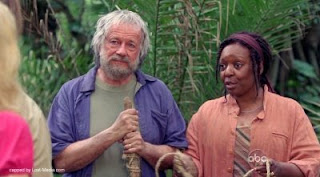 Richard referred to Eloise as "our leader" suggesting, perhaps, that she is the solo leader at that time and that Widmore is waiting in the wings. Perhaps he ascends when she leaves the island for whatever reason.

The surgery Jack was performing was the infamous "five seconds" surgery he told Kate about back in the pilot episode, when she was stitching him up.

Jack and Jacob shared an Apollo candy bar, the preferred candy bar of the Dharma Initiative.

While waiting for Locke to fall, Jacob was reading Flannery O'Connor's "Everything That Rises Must Converge." It's a short story collection, but I know little about it beyond that. That title sure is suggestive, though. 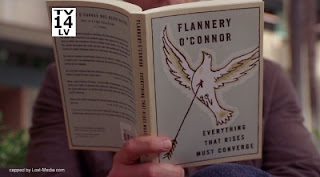 The Dharma house Jack and Sayid entered from the tunnels was, presumably, Horace's. When Sayid was shot, he was wearing Horace's jumpsuit. If Sayid died/dies, does this mean that perhaps it's HIS body seen in the pit back in season three, from which Locke found the map to Jacob's cabin?

Jacob's cabin still had the dog picture in it, but all the other weird stuff (jars of liquids) was gone. It was also significantly less creepy in the daylight.

The knife holding the piece of tapestry to the wall appeared to be the same knife Jacob used to prepare his fish in the cold open.

Ben telling Locke he was a Pisces was, of course, a lie. Ben's birthday is December 19th, and Pisces are sometime in the early spring (Feb-March).

Sun found Charlie's Drive Shaft ring in Aaron's abandoned crib. Charlie left it there before leaving for the Looking Glass station in the season three finale. 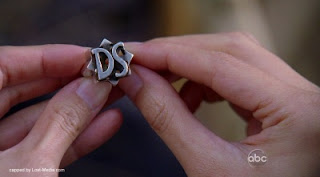 Presumably, the injury Dr. Chang received while stuff was flying around explains his prosthetic arm in the Orientation videos.

The sight and sound of Juliet, wrapped in chains, getting pulled into the drill hole looked and sounded a lot like Smokey, when he wraps himself around a victim and drags that victim away.

Jacob seemed to give each of the Losites something (though not necessarily something physical, such as Locke's life). At the very least, he touched each of them.

We saw Jacob visit most of the Losties before the crash of flight 815. However, he visited Hurley and Sayid AFTER that crash. Did ever visit them pre-crash?

Ilana asked for "Ricardus"; Richard responded to the "what lies in the shadow of the statue" riddle with a phrase in Latin. The Internet tells me it translates to: "he who will protect/save us all."

Juliet hit the bomb 8 times before it exploded.

Questions:
So: did they change things, or was the detonation of the bomb the "incident?"

What's the deal with Jacob and anti-Jacob? To what rules are they beholden? Of what loophole did Not Locke take advantage? What is the source of their conflict? Is this the conflict for which Ben, Widmore and Ms. Hawking have been preparing?

What are the extent of Jacob's powers? Why doesn't he age? Why does he need Richard to interface with the Others? How does he leave the island?

Is resurrected Locke anti-Jacob in Locke's form? Is anti-Jacob Smokey? Is he Christian? If so, where'd Christian's body go? Has Locke been inadvertently working with anti-Jacob since day one? Was Jacob ever in that cabin? Who broke the line of ash around the cabin?

If Not Locke is anti-Jacob, why did he need Richard to show him where Jacob was? Why did he bring all the Others along? Was it all just to sell the con he's pulling on Ben?

Is Jacob good or bad? Are we supposed to be happy or upset that he's dead (well, I think we're SUPPOSED to be upset, but should we be)?

If that was the Black Rock at the beginning, then how did it get so far inland?

We got a pretty good look at the statue: was that Sobek (with the head of crocodile), or Tawaret, the fertility goddess? 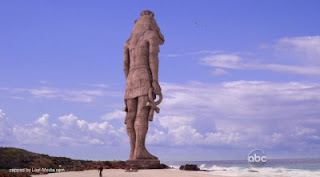 Are the Losties special because Jacob visited/touched them, or did Jacob visit them because he knew they were special?

Why was Ilana all bandaged up in that hospital? Why did Jacob need her help?

What "candidacy" were Bram and Ilana talking about? Could Frank be a candidate for what?

Assuming most of the Losties survive the detonation of the H-bomb, does Sayid make it?

Next week:
No new Lost until 2010, but I may have another long-winded Lost post or two up my sleeve before then. 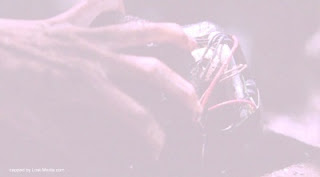