AKA: Moe gets plastic surgery to make himself more handsome.

The Setup: After winning a contest at Duff Days, with the prize being featured in the new Duff Beer calendar, Moe is discouraged to discover his face covered up in the calendar because he's too ugly.

Moe: Yeah, hey, I've got a gift. As a child, I was bitten by the acting bug. Then it burrowed under my skin and laid eggs in my heart. Now, those eggs are hatching and I -- the feeling is indescribable.
Homer: I know what you mean. Our dog had that.

Teebore's Take: Another inoffensive yet fairly dull and unfunny episode, this one continues Moe's progression (digression?) from character to caricature, as he's transitioned through the years from a slightly misanthropic bartender to an inept social deviant. Once again, the first act, with the family's antics at Duff Days, remains the funniest part of the episode. After that, Moe's plastic surgery and the stint as a soap opera star it garners him provide little laughs. There are a few chuckle-worthy gags here and there, but I even had a hard time coming up with funny lines from this one.

Moe's old face somehow reappears after he's crushed under a stage flat. He even comments on how ridiculous that is before the episode ends and he's cutoff mid-sentence.

Homer's a jerk throughout most of the episode, particularly when he's urging on Moe's desire for revenge after Moe gets his new face. In the end, though, most of his antics are done at Moe's request. 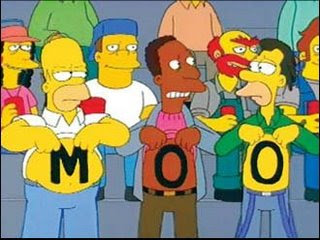