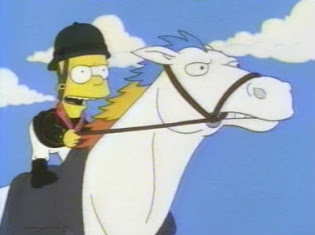 AKA: the one with the murderous Jockey-elves

The Setup: At the County Fair, Bart saves a diving horse named Duncan from the dog food factory while Lisa is outraged that another school's band wins the Battle of the Bands contest despite using expressly-forbidden visual aids.

Lisa: I hate to be a killjoy, but do you really think we can win playing "Stars and Stripes Forever?" It's so beginner band, and we're advanced beginner band.
Largo: Very well, Lisa, what rousing Sousa march would you have us play?
Lisa: Well, I thought for once we could play a song that wasn't written by Sousa.
Largo: You mean something ... just arranged by Sousa?

Bart: Who are those pleasant old men?
Homer: It's BTO -- they're Canada's answer to ELP. Their big hit was TCB. That's how we talked in the 70's. We didn't have a moment to spare.

Homer: That horse better win, or we're taking a trip to the glue factory -- and he won't get to come.
Lenny: Yeah, that's a great tour. But you can't see it all in one day. 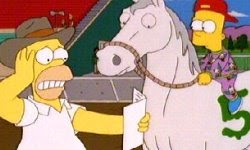 Teebore's Take: Let's just get this out of the way up front: I know I have no business liking this episode. Its patently ridiculous, and a fair example of everything people don't like about "The Simpsons" in their post-Golden Age years. But damn if I don't still like it. I mean, come on, Bart and Homer run afoul of murderous Jockeys who are really elves because Bart and Homer have given a horse they acquired at the County Fair a bad attitude that makes him an unbeatable racer? And the elves are defeated when Marge and Lisa hose them down and tie them into a garbage bag? Zany? Yes. Ridiculous? Yes. But also hilarious, in a DC Comics-in-the-Silver Age kind of way. In fact, I'm pretty Jimmy Olsen had the same problem once.

There's also a humorous, if slight, B-plot involving Lisa's outrage at the results of the Country Fair's Battle of the Bands which rounds out the episode nicely. And the episode is, as I recall, one of the first to be self-referential by acknowledging the show's history within the episode: Comic Book Guy references Marge's existing gambling problem (from the episode "$ringfield") when she discovers the thrill of horse racing, as well as the last time the Simpsons owned (and couldn't afford) a horse in the episode "Lisa's Pony."

Of course, the realism on display in that episode, with Homer working overnights at the Kwik-E-Mart to make ends meet, has no room in this episode amongst the Jockey-elves. Generally speaking, putting aside humor drawn more from reality in favor of something completely over-the-top doesn't usually benefit "The Simpsons," but damned if I don't enjoy this episode regardless.

What with the Jockey-elves and whatnot, this one pushes the zany to the limit.

Homer is pretty much a jerk in his approach to horse racing and in his dealings with the Jockey-elves, but then again, can you blame him?
Newer Post Older Post Home
Posted by Austin Gorton at 8:45 AM