The Setup: While hiking through the bird sanctuary, the Simpson family discovers it's been replaced by a new auto race track. While watching the races, Maude Flanders is killed when a barrage of T-shirts fired at a ducking Homer knock her off the top bleacher.

Babcock: Folks, I've got some spare tickets if you'd like to stick around for the race.
Lisa: That's very sweet but we have a full day of hiking planned.
Homer: We can hike anytime. This is our chance to see cars driving.

Bart: Why are you taping Flanders, Dad?
Homer: You'll see.
Bart: Do you even have a job anymore?
Homer: I think it's pretty obvious that I don't.

Homer: Oh, wake up, Ned. You think Maude isn't dating in Heaven?
Ned: You think she would?
Homer: How could she not? The place is full of eligible bachelors. John Wayne, Tupac Shakur, Sherlock Holmes ...
Ned: Sherlock Holmes is a character.
Homer: He sure is. 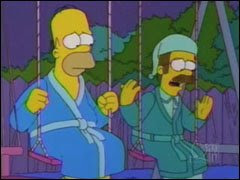 Teebore's Take: Well, this is just a crappy episode. It isn't like "The Simpsons" can't find humor in death and grieving, they just don't bother to in this episode. Compare this episode to "'Round Springfield," which dealt with Lisa's grief over the death of her mentor, Bleeding Gums Murphy. That episode is hilarious, despite its sometimes-heady subject matter. The death of Bleeding Gums, a minor character even by "The Simpsons" standards, is handled with more grace and style than the death of Maude, wife of one of the show's biggest supporting characters.

Both episodes were less about the deaths of their respective characters than they were how those deaths impacted other characters, in this case, Flanders. And while there is definitely storytelling potential in this episode's exploration of Flanders faith, shaken by the death of his wife, that plot point merely gets shoehorned into the episode's third act and is resolved within minutes. While "The Simpsons" gets credit for not wiping the slate clean in the next episode with an inexplicably-alive Maude, this episode has little going for it: it's not funny, heartfelt or particularly memorable. It's not really much of anything.

Incidentally, I've heard lots of rumors through the years regarding the circumstances of Maude's death. What I've come to understand is that Maggie Roswell, the actress who performed Maude's voice, was involved in a pay dispute with the producers when the season eleven episodes were being voiced (another actress plays the character in all episodes this season except for one, this episode included). When the showrunners decided to kill off a character as an acknowledged publicity stunt, they settled on Maude, though what role the dispute with Maggie Roswell played in that decision is unknown. However, eventually the dispute was settled amicably, for in all of Maude's subsequent appearances on the show (as a ghost in one Treehouse episode, or whenever she appears in heaven, for example) Maggie Roswell returned to provide the voice. In fact, I noticed her in the credits for the just-aired episode.

Bleeding Gums Murphy died in a hospital, Maude Flanders died after being shot off a grandstand by a barrage of t-shirt guns. I think that's a pretty fair representation of what "zany" has done to "The Simpsons".

While Homer does genuinely try to help Ned work through his grief, he did more or less cause Maude's death, which is a pretty jerk-ass thing to do. 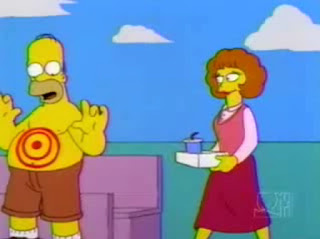