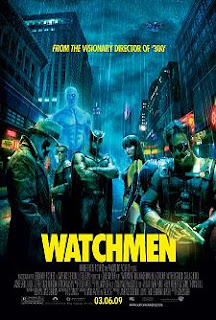 It is 1985. Thanks to a naked, blue demigod America has won the Vietnam War. Despite this, tensions between the United States and USSR are at all time high. Then a well known costumed hero is thrown through the window of his apartment. Was it a simple, random murder or something much, much bigger?

Watchmen is a movie twenty years in the making. It is based off a "graphic novel" written by the critically acclaimed Alan Moore. The comic's adult themes and original storytelling transformed the comic book industry for years to come and its influence can still be felt today. The movie will not transform cinema the way the comic did for it's medium, but it's certainly not without its merit.

For the most part the acting was great in this movie. The stand out performance would be that of Jackie Earle Haley who plays the part of the fairly psychotic vigilante known as Rorschach. On the flip side, Billy Crudup's voice work for Dr. Manhattan was a bit too understated for my taste. It was in danger sucking the energy out of certain scenes. Also, Mathew Goode's accent as Adrian Veidt was just goofy. 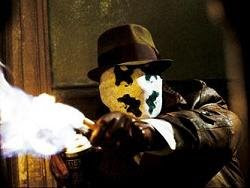 The special effects were great. They're what you'd expect from a modern day "superhero" movie and from Zack Snyder the director of "300". However, the action was over the top. It's not that I don't think stylized action could work in this movie because lord knows I love my action. But, I feel like the action and violence was so over the top that it was bordering on superhuman. That kind of action seems to contradict the premise of a movie which is about "real people" with "real problems" who happen to have worn costumes and fought crime in their past.

Ultimately, the Watchmen's greatest success is also its greatest failure. I'm sure that's the kind of contradiction Alan Moore would love...if he hadn't completely disowned this movie before it even started. My point is that the movie tried to cram too much into an already lengthy 2 hour 45 minute movie. The plot seems to meander from past to present and from character to character. Each scene can feel like just a random slice of the life of the characters. Sure, the movie starts off with a murder being investigated, but half of the time the characters aren't even concerned with the murder. Couple this with the fact that the climax of the film isn't your traditional superhero climax and the movie never seems to gain momentum. 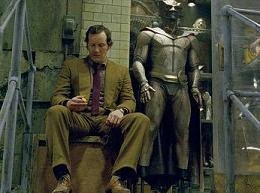 However, no matter how long and random the movie may seem, in retrospect almost every scene was important to where the movie was headed. Nothing was superfluous or random. Everything was connected.

One notable exception to every scene being important is the opening montage of the movie. Most of the montage is not relevant to the main plot. It's designed to give the audience a feel for the alternate reality Watchmen takes place in. Which is certainly necessary. But it was also fairly long.

The opening montage becomes a perfect microcosm for the entire movie. I'm trying not to sound like your typical "short attention spanned, Generation Y American" here, but just because the opening montage was necessary doesn't mean it couldn't have been shortened in length. In the same way, I believe that certain scenes in the movie, while absolutely necessary, could have been written and shot a little tighter in order to keep the pace of the movie up and not feel plodding at times.

Like the comic book, the best part about the movie is not the journey you take while watching but what happens in hours and days after. Where the movie truly shines is when take time to reflect on the plot and its themes. Like a clock, you mentally put the individual and seemingly random pieces of the movie and carefully fit them together to get the full breadth of the story.

Similarly, you can reflect upon the issues and themes this movie brings. There are tough choices presented with no right answers. This isn't a movie about superheroes. This is a movie about humans and the human condition. Whether it's an alternate reality in 1985 involving a blue, God-like being and the threat of nuclear war or our own reality facing a financial crisis and the threat of terrorism, the fear and paranoia people feel in the face of a problem bigger than themselves is a universal message that can resonate within all of us.

They used to say the Watchmen story was impossible to make into a movie. I feel the Watchmen movie is impossible to review. I suppose at the very least I should say that I did like this movie, a lot. But if someone were to say they didn't like this movie it wouldn't surprise me and I wouldn't necessarily blame them, either. I would suggest to anyone who hasn't seen the movie to give Watchmen a shot. One way or another, it'll stick with you.

The Bad: The plot can be so complex that it starts to feel random and meandering. Also, I know this might change the movie from Art to art, but when you're flashing from past to present and back again, labeling the scenes with a date of some sort could do wonders for clearing up confusion amongst viewers who haven't read the "graphic novel".

The Disappointing: This movie is titled Watchmen but there is no sign of the Clock King! 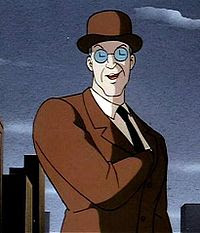 I watch the Watchmen! 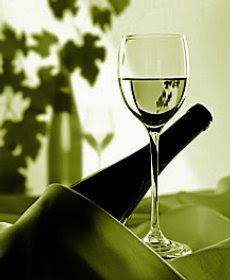 Like a fine Riesling wine, this movie gets better with age. Of course, if you're not a wine drinker, you could always just Irish up some Nite Owl coffee.
Newer Post Older Post Home
Posted by Dr. Bitz at 9:30 PM