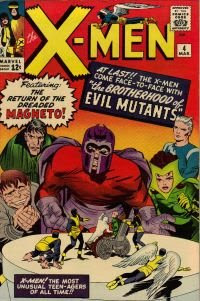 "The Brotherhood of Evil Mutants"
March 1964

Plot: While the X-Men celebrate their one year anniversary as X-Men, Magneto's Brotherhood captures a Naval convoy freighter, which they use (along with Mastermind's illusions) to conquer the South American Nation of Santo Marco. The X-Men intervene, taking on the Brotherhood, and manage to force Magneto out of the country, but not before Quicksilver disables a nuclear bomb Magneto left behind and an additional booby-trap robs Professor X of his power.

Firsts and Other Notables: Quicksilver, the Scarlet Witch, Mastermind and Toad all appear for the first time, as Magneto's Brotherhood of Evil Mutants (though only the title refers to them as such).

Quicksilver and Scarlet Witch, of course, go on to become mainstays of the Avengers, starting out in the first group to replace the original Avengers as part of "Cap's Kooky Quartet."

Mastermind hangs around in a henchman role, for the most part, until playing a fairly significant role in the Dark Phoenix Saga before disappearing until his death in the 90s.

Toad becomes the very definition of a perennial henchman until he briefly leads his own incarnation of the Brotherhood in the 90s, before becoming the recipient of Halle Berry's worst line in the first X-Men movie.

Professor X and Magneto have the first of many telepathic conversations with each other, presumably on the Astral plane (though Professor X merely calls it a "mental plane"); the conversation lays out their basic conflicting philosophies regarding mutants: peaceful co-existence vs. mutant superiority. 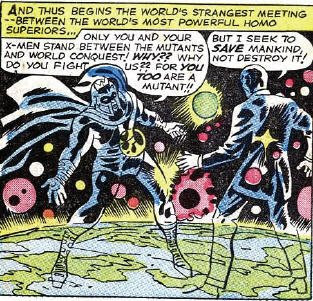 A Work in Progress: While Scarlet Witch and Quicksilver are established as siblings, no mention is made of Magneto being their father. That relationship wouldn't be established for a while yet.

While they are ostensibly the villains of the piece, they are portrayed fairly sympathetically, working for Magneto out of gratitude for his rescuing them from an angry mob. Quicksilver even stops Magneto's fail safe bomb from exploding. I doubt Stan was thinking that far ahead, but it does make their later reformation with the Avengers all the more believable.

The army that Mastermind creates an illusion of (and upon which Magneto's real army is later based on) is fairly reminiscent of the Nazi army, which is interesting in light of the later revelation that Magneto was imprisoned in a Nazi concentration camp as a boy. 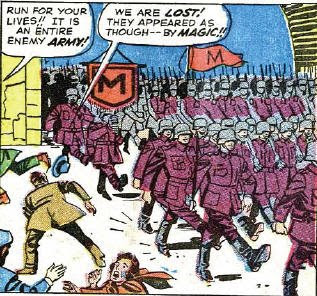 Ah, the Silver Age: The South American nation of Santo Marco looks more like an Eastern European one. 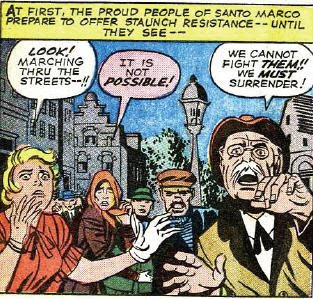 Teebore's Take: Setting up an opposite number for the X-Men consisting of evil mutants makes so much sense, it's a wonder it took four issues and eight months for them to appear. The parallels and differences between the two teams are well established in the first few pages, with the X-Men celebrating with cake followed by the Brotherhood being introduced via a conversation over dinner. The notion of Magneto and Professor X as visionaries with respective followers is then strengthened through their mental conversation.

The actual action in the issue features the standard Silver Age approach of setting the team off to face their opponents one-on-one, though the technique works well to show off both the X-Men's and the Brotherhood's respective abilities. All things considered, with the introduction of the Brotherhood adding to the developing mythology of the series combined with some solid action and a fair amount of gravitas therein, this issue stands out from the previous three, and is the most solid issue yet, overall.