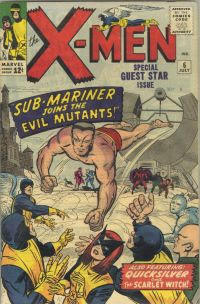 Plot: One day Professor X and Magneto both decide, more or less at the same time, that Namor the Sub-Mariner might be a mutant. Each telepathically races to recruit him before the other. Magneto makes contact first and Namor travels to Magneto's island base, followed by the X-Men. The Brotherhood fights the X-Men, Namor fights Magneto (after seeing how Magneto treats Scarlet Witch, Namor vows to never ally himself with Magneto), then he fights the X-Men, because that's how Namor rolls. Ultimately, Namor decides he doesn't need any surface-dwelling allies. Professor X allows a captured Quicksilver and Scarlet Witch to escape with Magneto, because they would be useless to the X-Men until they join of their own free will.

First and Other Notables: Marvel Girl wears a new, pointed mask. It will be gone next issue.

Sub-Mariner, a Marvel Silver Age guest-star staple, appears in "X-Men" for the first time. He was kind of like the Wolverine of his day: every new title that debuted was bound to feature an appearance by the Sub-Mariner before too long.

Marvel would toy with the idea of Sub-Mariner being a mutant (making him Marvel's "first" mutant) for years. He was declared such in the 90s in an attempt to boost sales on his title by implying a kinship withMarvel's bestselling X-Men titles. The idea is that while Namor is a half-human/half-Atlantean hybrid, he's a mutant because he can fly, a trait neither species exhibits.

A Work in Progress: Professor X states that the X-Men's mission is to locate mutants before they are found by Evil Mutants.

Magneto further demonstrates telepathic powers and an astral projection ability; his possession of both abilities goes unexplained and they are largely forgotten moving forward.

Ah, the Silver Age: To start, there's the extreme coincidence that it took Xavier and Magneto both exactly six issues to realize that the Sub-Mariner might be a mutant and that their opposite number might also be making the same deduction and attempting to recruit him right now. 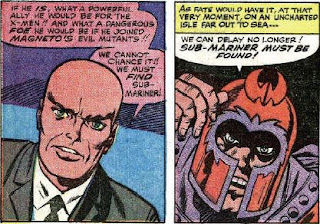 At the X-Mansion, it's the cook's day off, so Jean does the cooking for the team. Of course she does...

Magneto's island contains a device that mimics his magnetic abilities. It is, what else, a giant horseshoe magnet. 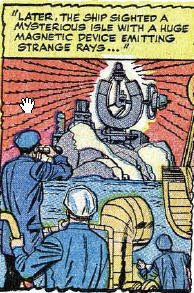 Despite owning a mentally-controlled jet (as seen in issue #1), Professor X and the X-Men charter a boat to reach Magneto's island. Even though it's the 1960s, they somehow get their hands on what appears to be a 17th century sailing vessel, complete with a plank to walk. 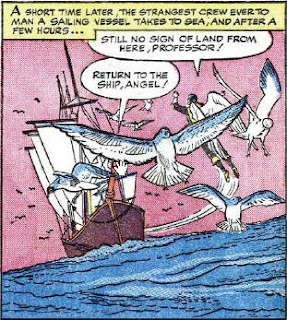 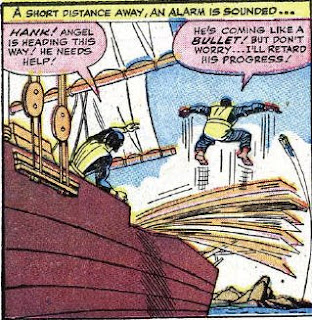 Finally, there's an ad in this issue for a weight INCREASING supplement, including a testimonial from a Hollywood actress about how important it is for woman to keep their figures full. 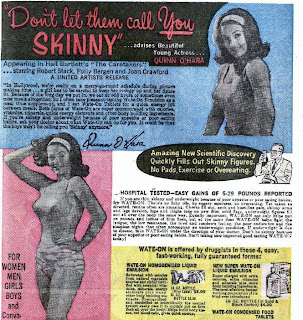 Young Love: Jean is glad that the Scarlet Witch is remaining with Magneto, as she is simply much too attractive. Angel asserts that Jean is just as attractive. 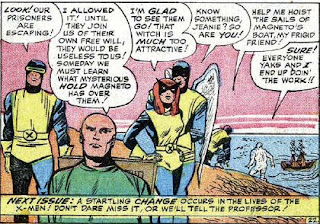 It's in the Mail: The Letters Page mentions a demand by readers for "X-Men" to be published monthly; the editor assures us that once Stan and Jack figure out a way to do twice as many issues in a year, it will be.

After reading their first appearance in issue #4, this writer already believes Quicksilver and Scarlet Witch are super-heroes despite working with Magneto. 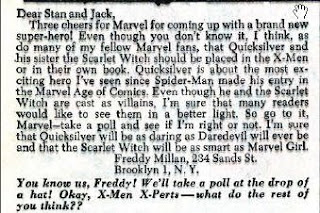 It seems the pair had quite a following back in the day, even after only a few appearances. Assuming that's the case, it makes sense why Stan would eventually move them into "The Avengers."

Finally, here's a letter from a woman who loves to read the X-Men despite being a housewife.

Teebore's Take: Huzzah, the X-Men fight the Brotherhood for the third issue in a row!

Look, just because it makes sense to give the X-Men an opposite number in the Brotherhood doesn't mean they have to show up in every freakin' issue.

Attempting to change things up a bit, Stan throws in go-to guest-star Sub-Mariner, and while Namor is at his haughty-best, it isn't enough to make the issue stand out much from the previous ones.

For me, the best parts were some off the more Silver Age-y and chuckle-worthy elements of the issue, like Magneto's island horseshoe magnet and the X-Men's antiquated sailing ship. Aside from that, it's another battle with the Brotherhood, a schtick that's already wearing thin.
Newer Post Older Post Home
Posted by Austin Gorton at 4:55 PM