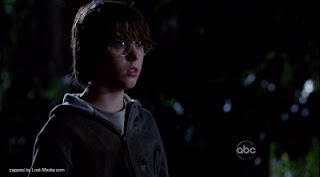 "He's Our You" is humming merrily along. It's an enjoyably old-school episode, the first in a long time which features a character-centric story alternating between on-island events and off-island flashbacks. Some dots are connected:Sayid did, indeed, believe he was killing Widmore's men for Ben; Ilana is, presumably, a bounty hunter working for the heirs of one of those men and that's why he was handcuffed on the flight back to Guam. Meanwhile, on the island, Sawyer is struggling to figure out a way to saveSayid without blowing the Losties cover. Sayid goes on a trippy drug-induced voyage and tells everyone he's from the future. Dharma laughs. Buses are burned, parallels between Sayid and Ben are established, and in the closing moments, Sayid escapes from Dharma with little Ben in tow. Then...WHAPAH!

Sayid puts a bullet in Harry Potter's chest, and minds are blown clear out the door.

Did Sayid just kill Ben? Is that even possible?

For years, the producers have been saying that time travel on Lost works differently than it does on other shows (notably Heroes): there are no alternatetimelines , the past/future can't be changed. Details can be altered but what happens, happens (Charlie is going to die; nothing can change that, but the means and circumstances of it can change).

But what if the producers are intentionally misleading the audience with those remarks? They've 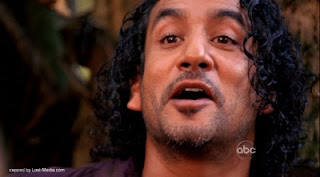 done it before: in season one, they said there would be no time travel. Did their plans change, or were they just trying to throw off fan theories that had already started developing? If they did that then, would they do it again? There's a large contingent of fans that believe Frank and Sun's meeting with Christian in the last episode was evidence of an altered timeline. That meeting took place in theDharma barracks, barracks that looked nothing like they did when we last saw them (after the mercenary attack). Even the passage of three years couldn't account forDharma building logos that weren't there before and previously unseen new recruit pictures on the wall. Was Sayid killing Ben as a child the event that created this new timeline, his death preventing the Purge, causing Dharma to leave the island in some other capacity?

(Personally, I don't think Frank and Sun were in Dharmaville/New Otherton when they met Christian: they were in the Dharma Processing Center, where new recruits are greeted immediately after getting off the sub, before being shuttled to Dharmaville where they get their job assignments. Note that Frank and Sun walked from the dock up to the buildings in minutes; Dharmaville is further inland, within the sonic fence. That would explain the difference in appearance: the Others never occupied this location, so it's simply become rundown in the years since the Purge.)

For the time being, I'm taking the producers at their word: what happened, happened (which, as it were, is the title of next week's episode) and the past/future can't be changed. Which means that somehow, little Ben will survive his encounter withSayid. Perhaps the island steps in via Richard, or maybe its healing mojo works overtime on him. More likely, I think, is that a barely-alive Ben is found and brought back to the Dharma compound, at which point the only surgeon capable of helping him will be Dharma's newest janitor. Forced to once again decide whether to operate on Ben (and blow the Losties cover along the way) Jack ultimately steps in and saves young Ben's life.

We don't know yet why the Oceanic Five had to come back to the island, except that it isn't for the reasons given by Locke. The time shifts stopped without them, and the people they left behind are doing fine. Maybe the reason thatSayid and Jack, at least, had to come back, was because they were instrumental in making Ben the man he is: Sayid, to shoot him, and Jack, to save him.

Favorite Bits:
"They just took a vote. Even the new mom wants you dead!"
or
"Three years, no burning buses. Y’all are back for one day..." 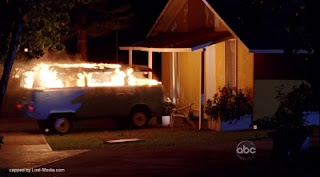 Tidbits of Note:
Sayid has some daddy issues (or at least a jerk-ass father) like so many other characters. 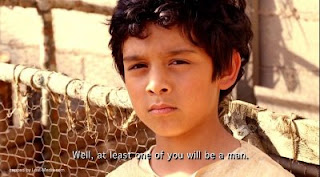 Sayid prevented his brother from doing something he didn't want to do by doing it himself, just like Eko did with Yemi when they were children.

The book little Ben gave Sayid was "A Separate Reality" by Carlos Castaneda. I'd never heard of it before this episode.

Ben's childhood meeting with a disheveled jungle-Richard, as shown in "The Man Behind the Curtain," took place 4 years ago, according to Ben, placing it in 1973, the year before Sawyer and company infiltrated the DI.

There were numerous ham references throughout the episode: Sayid's ham sandwich, Oldham, Dharma's Sayid, Juliet burning her bacon, and Hurley commenting that the dipping sauces really bring out the ham over breakfast. 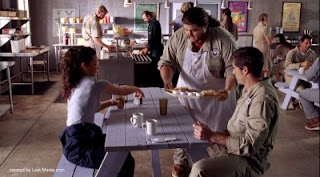 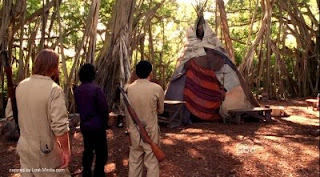 The internet tells me the song playing at Oldham's camp was "I Can’t Give You Anything But Love." It seemed vaguely familiar to me, but I couldn't place it.

It appears that Sawyer has known for some time that little Ben Linus is running around amongst the DI. I'd be very curious to see Juliet's reaction to discovering Ben was onceDharma.

MacCutcheon, the spendy whisky Sayid was drinking at the bar when Ilana met him, is the whisky Widmore used to humiliate Desmond.

Speaking of Sayid at the bar, I think that was the same bar at which Jack enjoyed a nightcap in "316." 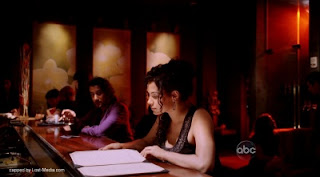 For the second time, Sayid is conned by a pretty lady. Poor guy is desperate for some lovin'. 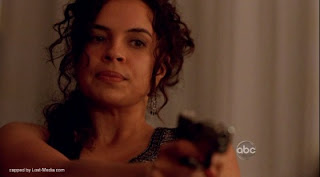 The Dharma Initiative seems to have some kind of on-island leadership council, of which Radzinsky is presumably a member, placing him fairly high in their ranks. He threatens to call "Ann Arbor," presumably the one in Michigan, which is where the DI was founded.

Questions:
What "organization" does Widmore head up? Are the people Sayid executed for Ben simply unknowing pawns Widmore uses in his search for and conquest of the island, or does he have a network of off-island followers like Ben?

Was Sayid's deportation to Guam by Ilana orchestrated by Ben or Widmore, or was it just another one of Lost's patented eerie coincidences?

Why did Radzinsky's threat to call Ann Arbor spur the others into action? Are they doing something on the island they don't want the rest of the initiative or the founders to know about? 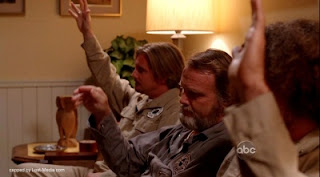 I suppose I should ask why Kate came back to the island, since the answer was important enough to interrupt with a careening burning bus, but frankly, I don't really care about Kate all that much.

Is Little Ben dead? If so, does that threaten the entire space/time continuum? If he's not dead, how does he survive? And if he does, has he always known thatSayid was the man who shot him as a kid, or did he not get that memory until Sayid went back in time and did it (like the way Desmond recalled his meeting with Daniel outside the hatch)?

If the past CAN change but Ben survives, how does that change the future? Will Ben wake up in the Hydra Hospital a nicer, gentler Ben? Will reality warp around Locke and everyone else in the "present?"

Will Jack be forced to blow his janitorial cover by saving young Ben's life?

Next Week:
Tensions rise in Dharmaville in the wake of Sayid's escape while the Oceanic Three are a bit miffed the people they came back to the island to save don't need it. 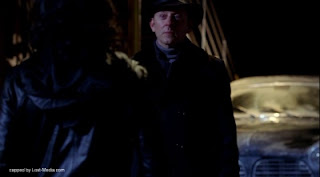