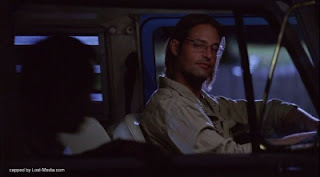 After last week's Locke-stravaganza, it seemed likely that this episode could easily be a let down. While it certainly wasn't as mind-blowing or revelatory as some episodes, I have to admit I watched most of it with a goofy grin plastered across my face. From the all-too-fleeting glimpse of an undamaged Four Toed statute to Sawyer's elegant creation of the "La Fleur" identity and his subsequent back story for the group to the image of Richard marching into the Barracks, torch alight, and the subsequent discussion with Sawyer, this episode had plenty of fun, intriguing and enjoyable elements.

"LaFleur" means "flower" in French, and Sawyer really bloomed in this episode (puns are awesome!). Ever since the Oceanic Six left (and even before) we've watched Sawyer grow into his role as an island leader. This episode gives us a Sawyer who is the respected and feared sheriff of the Dharma Initiative, a far cry from the Sawyer who stole all the guns back in season two and declared himself the new sheriff in town.

To underscore Sawyer's blossoming into a leadership role, flower imagery was everywhere this 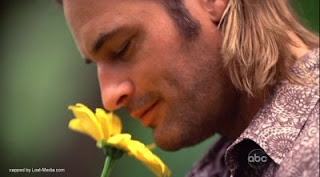 episode: the Orchid station, the flowery prints of the civilian 70s clothes, the flower Sawyer picks for Juliet at the end, the blossoming of their relationship and the birth of Amy's child. And then along comes the Oceanic Three (at least) to take the bloom off the rose. As Juliet's conversation with Sawyer in 1974 suggested, it's intriguing that the Oceanic Six were explicitly told they needed to return to the island to save the people they left behind, but now that they've arrived, it seems the Left Behinders are in very little need of saving. Sure, they'd probably like to make it back to the present, but I doubt Jack, Kate and Hurley can do anything about that.

Of course, whatever the reasons the island wants them back probably has nothing to do with the reasons the Oceanic Six were given (they were simply told what the island knew they needed to hear in order to convince them to come back), or else the danger is forthcoming and only with the Oceanic Six back on the island can it be averted. In the meantime, it'll be interesting to see how Jack, Kate and Hurley react to finding their friends not in imminent danger but rather living a fairly comfortable life in Hippyville.

Finally, I don't consider myself much of a shipper (unless we're talking Claire/Kate ;) ) but I have to say, I think Juliet has every right to lay a beat down on Kate at this point. It seems like as long as Kate is around, Juliet can't be with ANYONE. Poor Juliet seems destined to always be the other woman... 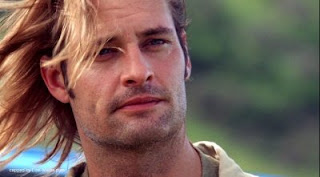 Highlights:
The glimpse, however brief, of the full four-toed statue (presumably). 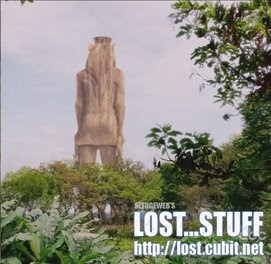 Sawyer's easy and believable lies to Horace...he is a professional liar, after all.

Most every scene with a shattered, broken Daniel.

Tidbits of Note:
The Dharma guys having a hootenanny at the beginning were in the Pearl station, I believe, the "observation" station.

In that station, a reel-to-reel deck was started up, similar to the one seen in Jack's house in "316."

As the group first comes across the DI, Sawyer tells the others to let him speak for them and he comes up with the lie about their wrecked salvage mission. How very like Jack and the Oceanic Six.

It seems the DI isn't as concerned with keeping the island hidden as other factions have been, considering they seem to have a two-week sub shuttle running back and forth.

Juliet shouting at Daniel to stop before he hit the sonic fence was, perhaps, one of the first times we've heard Juliet raise her voice, making the moment all the more memorable. Rarely does her calm demeanor break.

Richard noted that the sonic fence can't keep him and his people out. 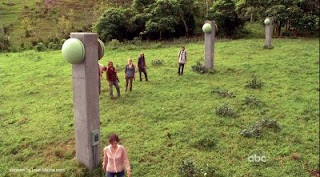 The dialogue between Horace and Sawyer at the end of the episode, when Horace wakes up, is the same, with the roles reversed, as when Sawyer wakes up from the sonic fence in 1974. 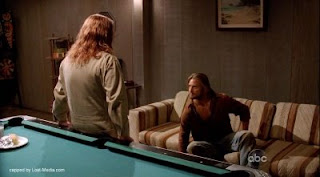 It seems the problem with pregnancy on the island came about sometime after Dharma, making it more likely that Ben himself has something to do with it.

In the beginning of season four, Ben stated that Charlotte was born in 1979...however, Daniel presumably saw her on the island as a little girl in 1974 in this episode. Plothole? More of Ben's lies? Or does it have something to do with how Charlotte and her mom left the island (perhaps the island dumped them far enough in the future that they needed faked documentation showing she was born in 1979 to account for her age vs. the time in which they ended up?).

Near the end, before Sawyer picks the flower, two people are playing chess.

The scene in which Sawyer walks in to find Juliet cooking dinner is similar to when she cooked dinner for Goodwin.

Is Ben on the island in 1977? Presumably he was born in the 60s and the came to the island when he was 10-12, so he could be, or should be arriving soon. Of course, he could be there already but Sawyer, Juliet, etc. don't know it as, as far as they know, Ben was born on the island and presumably always lived with the Others. That he actually grew up amongst the DI is something only the audience knows at this point, I believe.

Questions:
Why was the final time shift, from the (presumably) ancient past of the island to the 1970s, so much more painful than the other flashes? Because it was a donkey wheel flash? Because of the amount of time they traveled through? Because it was he last one? 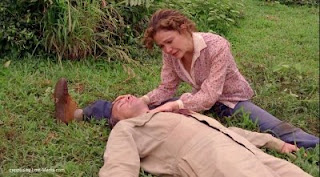 Who is Amy and Horace's son?

When Horace came upon a newborn Ben, his father and his dying mother in "The Man Behind the Curtain" he was with a woman named Olivia who was later seen to be a teacher on the island. The presumption was that the two were married. Were they? If so, what happened to Olivia that Horace is with Amy?

What happened in the two weeks between the events we saw in 1974 and the next sub departure that convinced Juliet to stay? Just blossoming love for Sawyer, or something else?

Why is Juliet working as a mechanic? Where did she get mechanic skills? 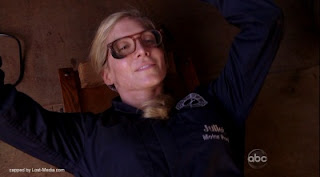 What's Daniel been up to from 1974-1977? In 1977 Juliet is a mechanic and Jin and Miles are part of Sawyers security detail, presumably, but what is Daniel doing?

More out of curiosity than anything else, I wonder in which Dharma house Sawyer and Juliet are living? Did Sawyer manage to get the same one in which he lived with Hurley when they were chilling with Locke? That'd be kind of freaky.

Did Sawyer pick "LaFleur" at random, or does it have some meaning for him?

Next Week:
Nada, as Lost takes a break to make sure they have enough new episodes to air in May for sweeps. In two weeks, Sayid is in the hot seat as Lafleur tries to deal with the sudden arrival of the Oceanic Five. 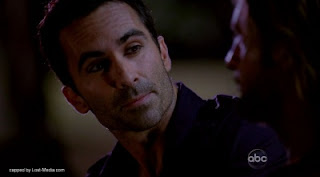