Alright, I admit it. I have writer's block. That's why I haven't been posting all that much. Nothing has been inspiring me. Nothing seems interesting enough or funny enough to write about. Well, the whole steroid thing got my ire up, but too much so. My post was so long that only two people read it...if I'm lucky.

Anyway, I suppose I could talk about how a supreme court justice is attempting to subvert our civil liberties and also endanger the very foundation of a stalwart of TV police procedurals, but perhaps that post is for another time.

I think I'll lighten things up by telling you about some commercials I hate.

I'm sorry, I got distracted. My point is, until I join the 21st Century, I'm stuck watching crappy, crappy commercials. So here are some commercials I hate. Some of them are a bit old, but they stick with me like a bad ulcer. Also, I'm leaving out the brand name in order to not reward the company for having such lame ads.

Exercise Machine Commercial - Let me set the stage for you. There's an exercise machine commercial that talks about how ripped men can get by using them. A 'real life' user of the product talks to the screen amidst montages of the equipment being used.
The thing is, there's something very smarmy about the guy talking. I mean...well...look at him: 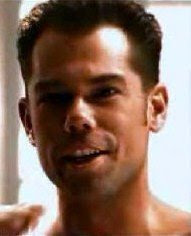 TOOL!
But really, it doesn't bother me that he looks like a tool, or that he's known to wear wrap-around sunglasses, or that he talks about how he takes his shirt off all time. I mean, Matthew McConaughey has been getting away with that for years.

What really gets me is, after the obligatory before and after picture, he says "I gave all my fat clothes to my fat friends."

Really? This is your selling point. I'm sorry, I think I'm going to pass on the exercise machine that promises to make me into the epitome of a douchebag.

Online Dating Service - There's a new ad campaign out there by an online dating service. It features monologues by 'real' people from the site. One of the people who supposedly use this site goes by the handle Junk Foody. This is what he says:

"I usually tell my dates jokes. Like...'Knock knock' and they say 'Who's there?' and I say 'a cow', then they say 'a cow' 'MOOOOO' [He's interrupting their response]. It's not really funny but they laugh anyway."

So this is the type of person you're going to boast about? He says it's not funny but the lady's laugh anyway? That's because they pity him due to the fact that they think he took the short bus to school. Sure, it's lame joke. But he's made it lamer...by GETTING THE JOKE WRONG!!!!

The proper joke:
Me: Knock knock.
You: Who's there?
Me: An INTERRUPTING cow.
You: An inter...
Me: MOOOOO! [Interrupting you, of course.]

You see, if you don't say the cow isn't of the interrupting variety then the joke makes no sense! So yes, ladies, you too could have the fortune of dating idiots like Junk Foody. Sign up now!

Anyway, the female clerk, confused by an admittedly ambiguously contradictory statement, tries to correct the woman by saying she actually wants her clothes let out.

The problem with this commercial is three fold.

First, it's a typical commercial conversation in which people intentionally say misleading statements that leads to further confusion. It's the ad's attempt to be humorous or clever. But the whole things ends up being stupid because nobody would actually have conversations like that. People aren't that big of idiots. Nobody says they're going to eat 'Boston cream pie' but actually mean they're going to eat 'Boston cream pie flavored yogurt'. It's just stupid.

Secondly, what kind of crappy customer service is this? The girl says she needs the waist of her pants brought in and the clerk is like "No, fatso, you mean 'out'." And they start arguing back and forth about what the customer wants? What happened to "the customer is always right?"

And finally, the woman walking into the store? SKINNY AS A BEAN POLE! What the hell is this clerk smoking thinking this woman gained weight? She's a size -2! In order for her to have gained weight she MUST HAVE BEEN A SKELETON!

But hey, eat the yogurt if you feel like having nonsensical, brain dead conversations.

(Author's Note: I originally said she must have been Skeletor....because I'm a geek. But then I looked up a picture of Skeletor and he's actually pretty ripped.) 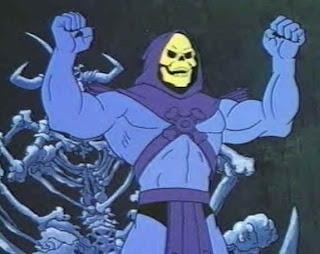 In fact, whenever I have done a home improvement project (which is admittedly very rare) or have seen other people working on a project at home, it is usually accompanied by a vast array of expletives spewing from the mouth. It's just how it is...and I don't need you feeding me lies, big box home improvement store!
Newer Post Older Post Home
Posted by Dr. Bitz at 10:42 PM