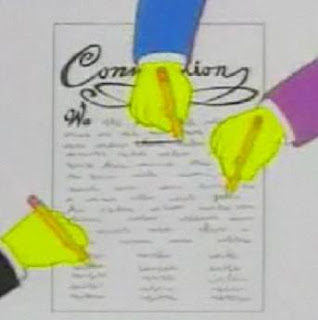 Ever hear of the constitution? It's kind of an important document. In fact, it's probably the most important document in American history AND American herstory. And, if you paid attention in American History 101, you'd know that there are amendments to the Constitution granting American citizens certain rights. You probably have heard of those rights. There's the one about allowing you to keep your loud mouth shut, there's the one giving you right to own a gun until it's pried from your cold dead hands, and there's that other one that grants paparazzi the right to give celebrities epileptic seizures with their flashbulbs. But we're not talking about those amendments.
The amendment I'm talking about is the fourth one. It goes a little something like this:

"The right of the people to be secure in their persons, houses, papers, and effects, against unreasonable searches and seizures, shall not be violated, and no Warrants shall issue, but upon probable cause, supported by Oath or affirmation, and particularly describing the place to be searched, and the persons or things to be seized."

Now that sounds like an amendment we can all get behind. However, there's hole in that amendment. I mean, sure, we want to be protected from unreasonable search and seizure, but what should happen if the police unreasonably search and/or seize? That's where the debate occurs. The Supreme Court ruled in 1914 (and added upon that ruling up until 1961) that any evidence found during an illegal search will be excluded from any court trial. But some of the current supreme court justices hope to change that. In fact, the US has recently taken strides in getting rid of the Exclusionary Rule. See for yourself in this article:

Furthermore, from what I've read, if Justice Roberts and Justice Scalia have there way, the Exclusionary Rule could be gone completely.

Now, you all know I'm bleeding heart liberal. So you probably can figure out where I stand on this issue. I know it's weird to think that the police could bust into my house and find all those dead hookers I have stashed under my stairway yet, if they busted into my house without a warrant, I could go Scott free. It kind of gives me the creeps too. But I still think the Exclusionary Rule is necessary.

As much as I'd like to think the Coast Guard are policing the police, that's not always the case. The Exclusionary Rule is a real good way to make sure the police are abiding by the fourth amendment. It just adds to the checks and balances, and I'm a fan of that. I'm all for locking up criminals, just do it with a warrant in hand.

That's just my two cents, though. And I'm no lawyer so take it with a grain of salt. Frankly, our civil liberties are the least of our problems. The real issue is what doing away with the Exclusionary Rule would do to one of my favorite police procedurals: Law and Order. 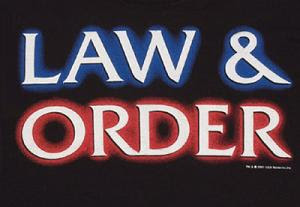 Ah...Law and Order. It seems that at any hour of the day I can find Law and Order in some form or another on some random channel and if I watch five minutes of it, I'm hooked for the remainder of the show. It has twists and turns and that famous duh-dum. Law and Order is just good fun and a good way to waste time. (Unless it's an episode that focuses on the personal life of one of the police officers or DAs. Please, I normally like character development, but not in a Law and Order episode.)

Anyway, my point is that about every third episode of Law and Order deals with the Exclusionary Rule. For whatever reason the police will end up obtaining evidence that, according to the Defense, they should have gotten a warrant for. Like the episode where the detectives found evidence in a homeless guy's box in a city park. You see, the Defense said that that box (and the surrounding area) was the homeless guy's "home" and thus the police needed a warrant to search it. Or there was an episode where New York underwent a blackout, and with police database offline, the police couldn't confirm the address of a store they suspected a kidnap victim was in. The police ended up busting into the store without a warrant and saved the victim. But with the Exclusionary Rule, there was a question as to whether or not the kidnapper would go free. (Thank God there's "inevitable discovery", am I right?)

Frankly, the Exclusionary Rule is Law and Order's go-to plot device. And the conservatives in the Supreme Court want to rip that away from the show. Well I say NO. Let's all band together and tell our government that we like Law and Order just the way it is!


As an addendum, I did came upon the article below and it discusses the eroding of the Exclusionary Rule. It reflects my point of view fairly well, if you're curious. I also like the fact that it brings up how Conservatives have a complete distrust of big government yet at the same time want to give unlimited power to the police department. It's just one those contradicting viewpoints that seem to be abundant amongst both extreme conservatives and extreme liberals. I find those contradictions weirdly fascinating...

Email ThisBlogThis!Share to TwitterShare to FacebookShare to Pinterest
Labels: I dunno...coast guard?, Law and Order, Simpsons Characters, Television, Who will police the police?