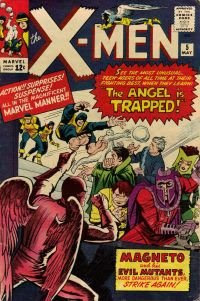 Plot: Returning home from Santo Marco after last issue, the X-Men attend to their powerless mentor when Marvel Girl's parents show up for a surprise visit. After scrambling to get them out of the mansion without exposing themselves as the X-Men (which leads to Cyclops getting locked in the Danger Room) the X-Men relax by watching a televised track meet (??). After seeing a winning athlete mobbed because the crowd believes he's a mutant, the X-Men rescue him, only to discover he's Toad, disguised to lure the X-Men out. Magneto and the Brotherhood arrive and Angel is captured. Shortly thereafter Toad enters a trance that compels him to return to Magneto, so the X-Men follow him to Asteroid M, where they battle the Brotherhood and rescue Angel. Upon returning home, they discover that they've passed their "final exam" and "graduated."

First and Other Notables: The first appearance of Magneto's orbitting base, Asteroid M. 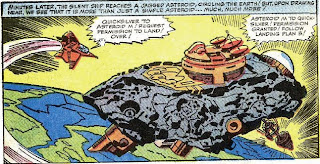 Marvel Girl's parents also appear for the first time, not that they're much of a big deal. They'll pop up now and then through the years, usually in the wake of their daughter's deaths.

A Work in Progress: Quicksilver and Scarlet Witch continue to play the role of conflicted villains, as they outright disobey Magneto. Scarlet Witch is shocked, SHOCKED that Magneto would ever consider murder (because would-be world conquerors are known for their benevolence and non-violent methods?) but the pair remains with the Brotherhood due to their debt to Magneto.

Ah, the Silver Age: Well, there's a track meet on TV. And somehow, the X-Men are able to see a mob threatening a mutant on TV and make it to the same track meet before the mob actually attacks the mutant. 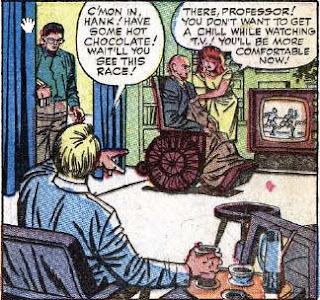 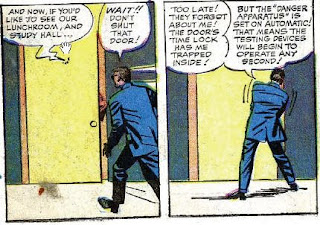 And, when Asteroid M is breaking up and Cyclops is on a piece that is drifting away from the other X-Men, Iceman creates an enclosed ice bridge to protect Angel from "the bitter cold" of outer space as he flies to rescue Cyclops. 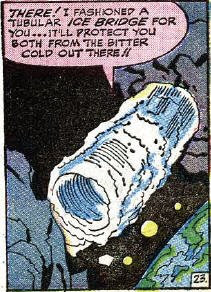 Maybe the next there's a fire, Human Torch can create a "fire tunnel" to keep out the heat...

No mention of whether or not Iceman's bridge protects them from the bitter lack of breathable air in outer space.

"Professor Xavier is a Jerk!": Remember last issue, when Professor X heroically threw himself onto a booby-trap to save the X-Men's lives, at the cost of his own power? Turns out he was just faking that whole "lost power" thing in order to see if the X-Men can function without him, as a "final exam" for them. Fooled you! 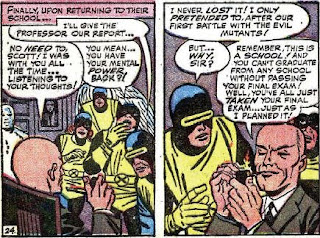 I'm sure that would have comforted Angel (or at least, his parents) had the X-Men "failed" their exam and Magneto killed him.

Human/Mutant Relations: Humans attack the in-disguise Toad at the track meet after he uses his powers to win. It's one of the first signs of overt fear and hatred towards mutants in the book. 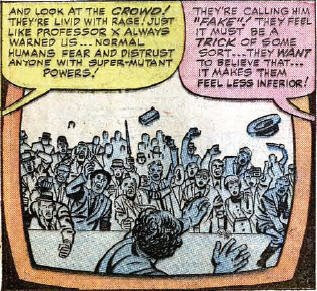 It's in the Mail: This issue marks the first in which a Letters Page appears, including this raving missive: 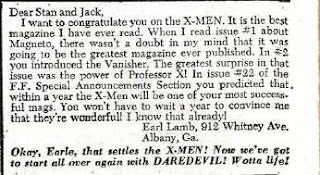 Teebore's Take: Where last issue was a solid X-Men vs. Brotherhood Silver Age showdown, this issue suffers a bit from largely rehashing that same story without adding much new to the mix. Toad remains a sycophant, Mastermind is creepy, Quicksilver and Scarlet Witch remain uneasy and openly defiant towards Magneto, and the X-Men fight them.

The issue is noteworthy for the first appearance of Asteroid M, which becomes a mainstay of Magneto's schtick, and memorable for the first big instance of Professor X being a complete dick to his students. In principle, his desire to see his students excel knowing he's unable to help them is understandable, but there has to be better ways to accomplish that goal. Fake a head cold or something, Chuck.

Meanwhile, the X-Men's passing of their "final exam" seems like less of an accomplishment considering there doesn't seem to be much Xavier could have done to help them, anyways. Powered or not, he wouldn't have journeyed to Asteroid M with them, and the X-Men more or less handled the Brotherhood themselves last issue; all Xavier did was throw himself onto a booby trapped door, and it doesn't take awesome telepathic power to help the X-Men in that way.
Newer Post Older Post Home
Posted by Austin Gorton at 8:58 AM