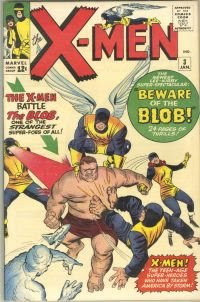 Plot: Professor X detects a new mutant presence and sends the X-Men to recruit him. At a nearby carnival they discover the Blob, an immovable, invulnerable (and kinda fat) sideshow attraction. The Blob returns to the X-Mansion but refuses to join the team, because he's a dick. Before Professor X can wipe his memory of all the X-Men's secrets, he flees, and returns leading the carnival in an attack on the X-Men. While the X-Men battle the carnies, Professor X creates an "intensifier" he needs (for some reason) to wipe the Blob's memory. At the end of the day, the Blob and the carnies are known the wiser once more.

Firsts and Other Notables: The Blob debuts, and while he's the headline act here, he goes on to become a stalwart partner/henchman of other villains (most notably as part of Mystique's Brotherhood of Evil Mutants/Freedom Force).

Beast is shown to be quite intelligent, and he comments at one point on the irony of being called "Beast" despite it.

This is also the first time Cyclops is referred to as Scott Summers (as opposed to "Slim", as in issue #1) and the first time he laments the "awesome power" of his optic blast, and how it prevents him from having a normal life. Get used to it; it becomes a bit of a thing with him. 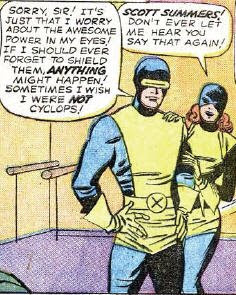 A Work in Progress: Whereas the professor had no problems affecting the Vanisher's mind last issue, this issue he must build a Kirbytech intensifier to successfully wipe the Blob's memory of the X-Men's secrets.

Ah, the Silver Age: Well, the X-Men fight carnies. You don't see that too often nowadays.

I particularly enjoy the menagerie of circus animals that get involved in the fighting, including Beast going toe-to-toe with that staple of the Silver Age, the gorilla: 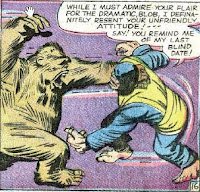 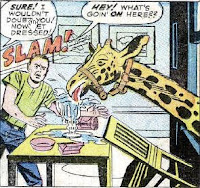 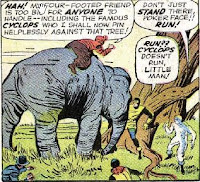 "Professor Xavier is a Jerk!": It's not just Professor X in this one, the X-Men as a whole are pretty much assholes. When Cyclops meets the Blob, he invites him back to the mansion and adds that "the X-Men don't take 'no' for an answer!" Really? They don't? Ever?

When the Blob asks him to scram, Cyclops calls him fat and blasts him for it. 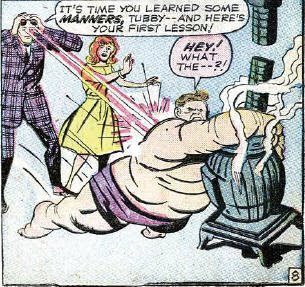 After running through some tests back at the mansion the Blob declines an invitation to join the the X-Men. While Professor X is so flabbergasted that he never conceived the notion that a mutant might say "no" to him, the team attacks him. So the Blob flees, and decides to come back with his carny buddies to even the score. I dunno, but I think the X-Men had it coming. 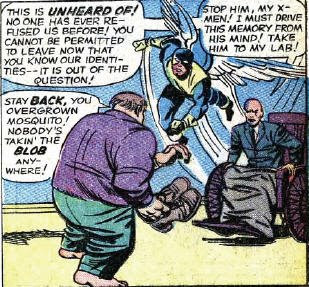 Look at it this way: The X-Men meet the Blob. They ask him to come back to their mansion. He says no. They say "thank you for your time, enjoy your life with in the carnival" and go home. Or maybe they stay and play some games and have a fun day at the carnival. I dunno. Either way, things turn out much better for them by simply taking "no" for an answer.

Young Love: Cyclops's growing feelings for Jean are acknowledged, but of course, he can't act on them because of his terrible power. All the male X-Men fight for the opportunity to escort Jean in the search for the Blob, including Iceman (who was indifferent to her presence in the first issue). She chooses to go with Cyclops, but Angel makes off with her regardless.

This issue also contains the infamous moment in which Professor Xavier declares his love for Jean (seriously, it's a Jean lovefest for two or three pages). They can't be together, according to Xavier, because he is "the leader of the X-Men and confined to this wheelchair." Not because he is her older teacher and she his teenaged student. 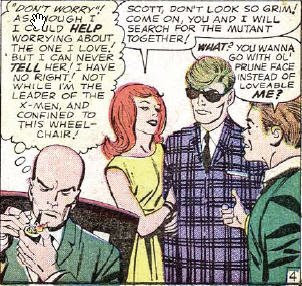 Yeah Chuck, the WHEELCHAIR is why you can't profess your love...
It seems that even Stan Lee recognized the inappropriateness of this, as Xavier's feeling for Jean were only ever brought up in this way twice more: once by Chris Claremont in the 70s when Jean was hospitalized and believed to be dying shortly before her emergence as Phoenix and decades later as part of Onslaught's origin in the 90s (Xavier's romantic and inappropriate feelings for Jean were part of the repressed bundle of emotions that became Onslaught).

Teebore's Take: This is the X-Men's first truly goofy Silver Age story and I liked it a whole lot more than I remembered. In addition to the great X-Men-on-Carny action at the end, there's a hilarious sequence at the beginning as the X-Men are searching for the new mutant Professor X discovered. One by one they see things they believe must be caused by mutant powers only to have them debunked, including someone on the sidewalk lighting paper on fire for some reason (he's actually using a magnifying glass in his hand) and someone at a carnival game who is shooting over his shoulder with unerring accuracy (turns out the dirty carnies have the game rigged and the shooter is in on it). Plus the term "rube" is tossed out generously throughout the story.

Of course, the X-Men themselves don't fare too well in the story. In addition to being dicks, they more or less get their butts handed to them by the carnies before Professor X steps in to save the day. And once again, the villain of the piece is defeated by having his mind manipulated by Xavier's telepathic power, rather than by anything the X-Men actually do.
Newer Post Older Post Home
Posted by Austin Gorton at 7:10 PM