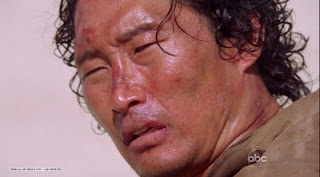 Once again, a couple of last minute reveals overshadow much of what went on in the rest of the episode: Jin's alive, and hanging with a pre-Alex, pre-crazy Rousseau and her shipwrecked crew.

Jin's survival wasn't a huge shock, as the likelihood of his survival has been hotly debated since the freighter went boom. But it was genuinely surprising to see him, and to have the question of his status answered so quickly and definitively. Perhaps that's a sign of the times, as Lost moves further and further into its endgame.

Meanwhile, the off-island events were relatively Kate-centric (as "centri 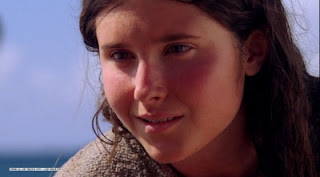 c" as any story can be at this point it seems), though the title suggested a focus on Aaron. The Little Prince is the English translation of Le Petit Prince by Antoine de Saint-Exupery, a classic French story in which an alien boy leaves his asteroid home and arrives on Earth, befriends a pilot and a fox, learns some lessons, then realizes the only way he can ever get home is to die.

While the end of that story seems to be pointing a huge finger at Locke, the title is a reference to Aaron, who drives Kate's actions throughout the episode even if he isn't directly involved. His importance is further emphasized by having Locke and company flash to the night of his birth. Throughout the first season, it seemed that Aaron was a linchpin to whatever crazy narrative was being spun. That importance as faded a bit through subsequent seasons, but this episode has me thinking that hopefully Aaron's role in things is neither insignificant nor forgotten. 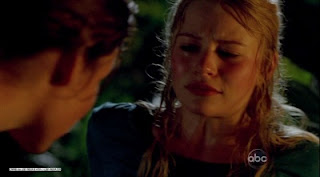 My Favorite Bits:
Ben had a couple winning deliveries this week, including the line about his lawyer, and making no attempt to hide the fact that he's behind Kate's recent problems. 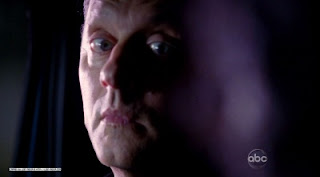 Tidbits of Note:
The episode opened with a scene on Penny's boat prior to the Oceanic Six's rescue, just like in The Lie. I'm curious if each of the Oceanic Six-centric episodes will open with a scene like that. Also, Kate was the one who came up with the idea of passing herself off as Aaron's mother, not someone else.

Miles puts his water in a flask. I wondered if he'd already drained the booze or not. Perhaps he drinks to quiet the dead voices?

Sawyer confides in Juliet, not Locke, about seeing Kate.

Almost everyone's getting nosebleeds now; in order, Charlotte, Miles, and Juliet. The 815ers haven't exhibited signs of time travel sickness yet. If we assume that exposure to the island's EM energy (as speculated by Daniel in last season's the Constant) is directly proportional to how affected one is by time travel, and that the longer one is on the island, the more of that energy they get hit with, then it would seem that Charlotte has spent the most time on the island, followed by Miles and Juliet (whose exposure to the EM energy seems to be about the same) and then, presumably, theLosties and Daniel.

The bottle found in the mysterious catamaran was from Aijira Airlines, part of the brief ARG from last summer (www.ajiraairways.com). 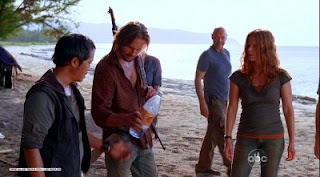 Ben's lawyer, in addition to assisting Ben in his mind games, is also suing Oceanic. Worth noting.

Jack is being scolded by the hospital official because of his drug-fueled expulsion from the hospital in the season three finale. I wondered about that in "The Lie"; nice to see it dealt with here. 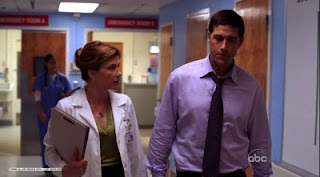 Rousseau's crew repeatedly referred to one of their people as Montand; Rousseau mentions in the season one finale that Montand lost his arm.

Off the island and three years later, Ben is still manipulating the hell out of everyone.

Questions:
Who sent the assassin after Sayid in the hospital? Widmore? Or Ben, pulling a trick similar to what he's doing to Kate? And why did said assassin have Kate's address?

Is Ben really trying to take Aaron away from Kate, or just spook her into the action that led her back to the Oceanic Six?

What did Ben and Sayid do, aside from visit Ben's lawyer, while Jack and Kate were stalking Claire's mom?

And who sent Sun the gun and surveillance info? Widmore, or her own people?

When were Locke and Co. when they arrived to find the camp destroyed and the catamarans? The future, I think, but how far into the future (I totally think that at some point, they'll flash to right before that moment, and Sawyer will be the one to leave all the empty beer cans behind)?

Whose boat did they take, and who was shooting at them as they paddled?

If Jin survived the freighter explosion and floated, unconscious, into the radius of the island when it began time-jumping, then how did he beat the helicopter back? Or was one of the time jumps we've seen to a point in time shortly after the explosion, allowingJin to get picked up at that time?

Is it safe to assume that Jin will time travel away from Rousseau shortly?After all, if he spent significant time with her, wouldn't she recognize him later? Or do we just chalk that up to Rousseau's craziness?

Next Episode:
The ominously titled "This Place Is Death" has Locke falling down a rabbit hole and Ben proving Jin's livelihood. 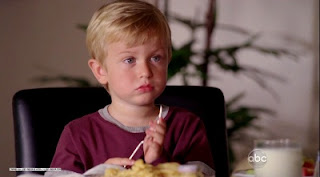