Harrison Ford: Primatech's demise
While this episode didn't offer any additional background regarding the Company, as I naively hoped it would, I did appreciate the effort was made to clarify that the Company was shutdown at Angela's insistence, not simply because one of its offices burned down.

Harrison Ford: Peter's a badass
How sad is it that Peter, with one power (and a relatively lame one at that, offensively speaking) is more effective than Peter with two dozen powers? Still, it was fun to see Peter use his power creatively and effectively throughout the episode. 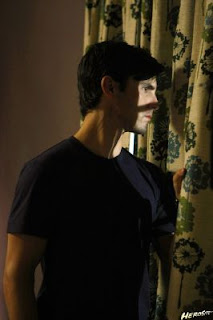 Harrison Ford: Containment vs. Extermination
While Nathan could have avoided the whole issue entirely by keeping his yap shut about people with super powers, setting him up as a lesser evil to Danko's (and presumably, members of the government's) desire to simply exterminate everyone with an ability makes Nathan's role as the villain of the volume far more intriguing than previously established.

Harrison Ford: Angela and Bennet
The final scene between Angela and Bennet on the park bench was beautifully shot. I particularly liked how Angela was wearing white (marking her as the "good" against Nathan and Danko's "evil" with the morally gray Bennet caught between them) with black gloves (because while Angela might be the White Hat in this scenario, her hands aren't clean). And having Noah give her back his retirement watch was a subtle way to show the audience that Bennet is ultimately working for her (well, subtle for this show...).

Harrison Ford: Focus
The episode benefitted greatly from its focus: no side trips into Claireland, no adventures of Hiro and Ando, the Bumbling Duo, and no updates on the Sylar road trip. It had a story to tell, and it told it. I'm not saying I'd like EVERY Heroes episode to be like this, but a little narrative focus now and then helps a lot.

Tommie Lee Jones: Daphne losing her power
I'll reserve judgement until we see the final outcome, but it looks like we're heading in a direction wherein Daphne becomes the first person to receive the "cure" Nathan is trying to get Mohinder to create. The tragedy for Daphne, should this happen, of course, is that her power keeps her healthy. And the tragedy for us would be the loss of power for one of the few characters on the show who seems to genuinely enjoy having one and can use it without hours of soul searching.

Wesley Snipes: Another Apocalyptic Portrait
I hate to end on a low note, especially since this was one of the better episodes we've had in a good long while, but seriously, another picture of foreboding doom? They still haven't managed to explain last volume's apocalyptic portrait (how, exactly, did Arthur's plan to give everyone super powers result in the world splitting in two, as was painted all over the place?). I thought this season was moving away from the whole "we have to save the world from being destroyed in the future" plot. Do they not know anything else to do with these characters? The idea of people being on the run from the government and trying to find a way to survive/fight back can carry the story of the volume without introducing yet another "avert the future" plot.

And seriously, Matt and Peter go back to Isaac's Loft/Mohinder's lab? Because no one would think to look for them there? Because Danko doesn't have cameras trained on a location central to numerous fugitives' recent lives? 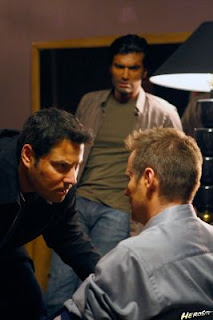