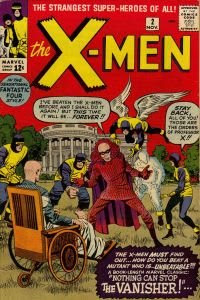 "No One Can Stop the Vanisher"
November 1963

Plot: When evil mutant the Vanisher threatens to steal America's continental defense plans using his teleportation power, Professor X sends the X-Men to Washington DC to stop him. The X-Men are ineffective against him, so Professor X uses telepathy to erase the Vanisher's memory of his power and intentions when the criminal shows up on the White House lawn to collect his ransom for the plans. The X-Men then make short work of the Vanisher's gang of hoodlums.

Firsts and Other Notables: The Vanisher makes his first appearance. He'll continue to appear sporadically through the years, remaining a relatively minor X-Villain.

FBI Special Agent Fred Duncan, the X-Men's government liaison, also appears for the first time. Duncan (and the government's more amiable relationship with X-Men) shortly gets downplayed as the notion of anti-mutant prejudice takes root, but he pops up later in the Silver Age and will decades later have a behind-the-scenes role in the origin of 90s villain X-Cutioner.

Ah, the Silver Age: Iceman hitches a ride to the mansion in the back of an ice cream truck. 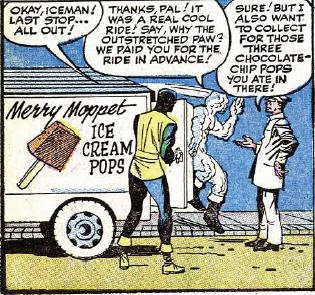 Also, the various hoodlums the Vanisher attracts are incredibly fawning for a group of criminals, especially the guy furthest to the right:

"The Vanisher, the Vanisher, omigod you guys, shh, the Vanisher is going to say something!"
Young Love: Marvel Girl swoons after Cyclops helps her during a training exercise.

Angel is mobbed by a gaggle of girls, and he and Marvel Girl flirt with each other. 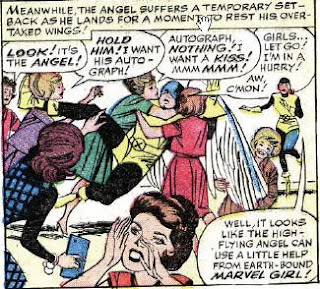 Human/Mutant Relations: The public turns against the X-Men after their failure to stop the Vanisher, but the concern regarding their secret identities plays more to the Spider-Man-esque paranoia of the Marvel Universe than to the fact that the X-Men are mutants. 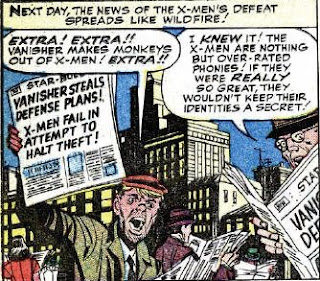 Teebore's Take: It's interesting that in only their second appearance the X-Men are basically outclassed by their foe and Professor X must save the day (of course, one has to wonder, if Xavier can so easily erase all memory of their foes' powers and evil intentions, why doesn't he do that to ALL their villains?). This reinforces the notion that the X-Men are students and not the most powerful characters in their own book, something that sets them apart from other super-heroes of the day.

Similarly, the Vanisher is a product of his time: he wears an outlandish costume (commented on in the story) for no reason but for the fact that super-villains wore outlandish costumes back then. Teleportation is a pretty weak power, but in context, the X-Men's inability to hit their problems away makes the Vanisher seem god-like. Of course, as times changed and the heroes, villains and their powers became more sophisticated, teleportation became a less effective offensive power. Perhaps that's why the Vanisher never really caught on, and, aside from a few appearances throughout the years (notably as the main antagonist of the minor mid-80s Fallen Angels limited series), remains relatively obscure and unused.
Newer Post Older Post Home
Posted by Austin Gorton at 10:13 PM