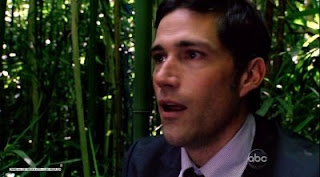 Without a doubt, this was the most narratively straight-forward episode since season three's "Flashes Before Your Eyes": we got an initial setup, then a flashback that flows linearly from start to finish before returning to where it started. Like Desmond in "Flashes," the story of this episode was focused solely on one character. By showing only what Jack did in the time between meeting Ms. Hawking and boarding Flight 316, this episode created in a 36 hour period of time a season's worth of flashbacks.

With the events unfolding just from Jack's perspective, the episode felt like "Pulp Fiction" or "Go", in which the same story is told from the perspective of different characters. Now that everyone's back on the island, we can flashback to Ben's 36 hours and see the events surrounding his phone call to Jack, or find out what happened between Kate and Aaron before she popped up in Jack's room for a little pre-crash roll in the hall.

What's more, for the first time in a long time, Jack's story was once again compelling in this episode as he struggled through his transition from a Man of Science to one of Faith. When was the last time we cared about a Jack-centric story? It's been awhile. Even the first flash forward only became interesting in retrospect, after its true nature was revealed.

Jack's joy upon waking up on the island and his belief on the plane that everyone being together meant something were very Lockian. Is that what the island's been after all along, someone who 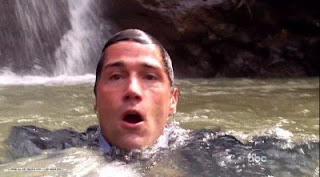 is equal parts Jack's skepticism and reason and Locke's blind faith and zeal? Has it been Locke's destiny all along to temper Jack into the true leader of the island, making Locke the Moses of the island, destined to lead his people to the Promised Land but unable to enter it himself? Note that the first thing Jack does upon his return is to take a heroic dive into the lagoon, perhaps baptizing himself anew as an island believer?

Just as Ms. Hawking instructed Jack and the others to recreate Flight 815 as much as possible, the episode was filled with references to the first episode and the lead-up to the crash: Jack waking up in a suit in the jungle to cries of help, Jack drinking at a bar before his flight, Hurley reading a comic book in Spanish, Jack making arrangements for the transportation of a coffin (though he had a much easier time of it with Locke...Ajira Airlines must be more lenient when it comes to physical remains than Oceanic). 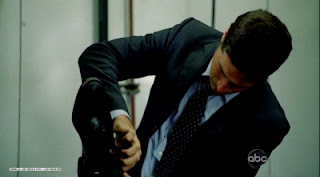 Hurley buying up as many seats as possible to save people from being on the doomed airplane.

Finding out that Frank was piloting flight 316. "We're not going to Guam, are we?" 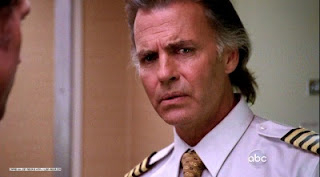 Tidbits of Note:
The Lamp Post station is clearly an allusion to the lamp post in the Chronicles of Narnia; in The Lion, The Witch, and the Wardrobe the lamp post marks the far edge of Narnia, and is the major landmark the Pevensie children see upon entering Narnia via the wardrobe. In The Magician's Nephew, it's revealed that the lamp post was transported into Narnia from Victorian London, making it a unique piece of the "real world" in the fantastical Narnia, sort of the inverse of the Lamp Post station. 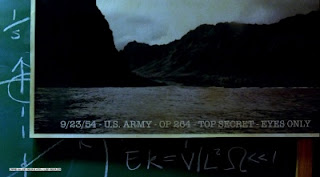 Eloise seemed relatively unconcerned regarding Desmond's message from Faraday; technically, we still don't know for sure that she is Daniel's mother.

Jack is surprised to learn that Locke killed himself, and Ms. Hawking specifically says that obits usually don't mention it...but the obit that Jack read in the season three finale's flash forward implied suicide by hanging: the Internet PORED over that obit in the break between season's three and four, looking for clues to the identity of the person in the coffin.

The time stamp after the opening said 46 hours earlier, yet Ms. Hawking said Flight 316 left for Guam in 36 hours...so where did the other ten hours go? Jack might have been unconscious on the island for ten hours, but I doubt Hurley struggled in the lagoon for that long. Perhaps the time difference between island time and off-island time is now ten hours?

Now that we know the Oceanic Six flew Ajira airlines back to the island, it seems more likely that the water bottle discovered by Sawyer and company back on the island is somehow from the Six. However, the belief is that when Sawyer found that bottle, it was at a time in the island's "future", a time we haven't seen yet. But the Oceanic Six seem to have landed in the island's past.

While the phrase "they all have to come back" has been used to describe the Oceanic Six in general, it seems the requirement for returning to the island is having been on the original 815 flight, which excuses Desmond, Aaron and Lapidus, but not Walt. I assume he's been given his own exception by the island, especially since enough off-island time has passed that the actor's growth isn't as much of a problem.

Ben's association of Jack with Doubting Thomas is another example of that name (or derivatives of it, such as Tom) popping up on the show. It's been used a lot.

The rabbit in the magic show was reminiscent of the island bunnies, like the one Ben used to con Sawyer in season three and the one that participated in the Orchid orientation film. 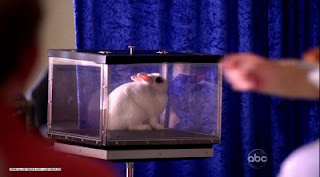 Now we know why Jack's dad has been wearing tennis shoes on the island.

Perhaps in light of last week's revelation regarding Ben, I got the distinct impression in this episode that Ben was doing his best to piggy back the Oceanic Six back to the island; I'm curious if his presence on Flight 316 screwed things up.

Hurley was reading a spanish copy of a Y: The Last Man graphic novel. Y was written by Brian K. Vaughn, one of Lost's writers.

I'm assuming the instrument case Hurley is toting as something to do with Charlie; perhaps another vision of Charlie is what convinced Hurley to get on the plane?

If the purpose of the Oceanic Six is to recreate Flight 815 via Flight 316 it makes a certain karmic sense that Frank is the pilot, considering he was supposed to be the 815 pilot.

Even Ben's snark is a lie: "How can you read?"/"Because my mother taught me." Except she didn't: she died in childbirth.

All those Lost analysts that have been putting off reading it groaned when they saw Ben was reading James Joyce's Ulysses, a dense and head-scratching loose adaptation of Homer's Odyssey (Ulysses is Odysseus, star of Homer's Greek epic, in Latin). The book frankly scares me, and I've read Faulkner. 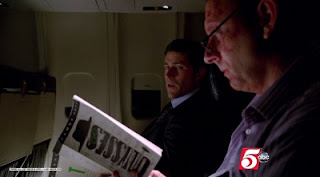 It may be nothing, but its worth pointing out that Ben walked away from Jack and off camera, shortly before the "crash."

The flash on the plane was, of course, exactly like the time flashes experienced on the island...which makes sense when we find out everyone is seemingly back in the 70s.

While the title of the episode is clearly referencing the Ajira airlines flight number, it could also be a nod towards the famous John 3:16 passage from the bible: "For God so loved the world that he gave his one and only Son, that whoever believes in him shall not perish but have eternal life."

The sixteenth episode of Lost's third season was "One of Us," which flashed back to Juliet's arrival on the island while in the present she retrieved medication to help Claire, which helped ingratiate her with the Losties. It turned out that was Ben's plan all along.

Questions:
Why did Ms. Hawking have Locke's suicide note?

She said the island isn't done with Desmond yet; what role does he have yet to play?

What favor did Ben leave the church to perform? Is Penny okay? How did he get so beat up? 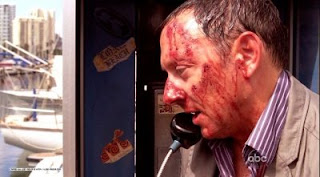 If Dharma used the Lamp Post station to locate the island, how did they know to look for it in the first place?

What further significance does Jack's grandpa have to things? We have to assume he'll be back in some capacity, otherwise why introduce him this late in the game?

What happened to the plane? Did it crash? What about the other passengers and Frank? We know from the previews of next episode that whomever was escorting Sayid seems to have survived, and I have a feeling we'll be seeing the guy who offered Jack his condolences, too. 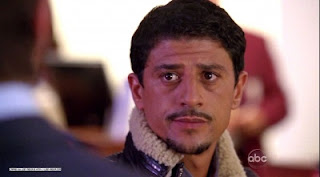 Have we now seen the entirety of the terrible things that happened because the Oceanic Six left? Because, frankly, things weren't that terrible...

So when is the island now? I'm pretty sure they're back in the 70s during the Dharma heyday (considering we've seen Daniel in that time) but then again, Jin could just be wearing an old Dharma jumpsuit and driving the bus Hurley fixed. 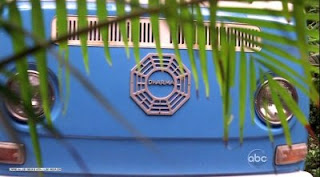 What about Ji Yeon? Did Sun tell anyone she'd most likely be gone for awhile? Is Sun the worst mother ever?

Who convinced Hurley to get on the plane?

How did Sayid get there? Why was he in custody? Who was the woman escorting him?

Next week:
The secret origin of Jeremy Bentham. Locke rises from the grave (well, coffin). 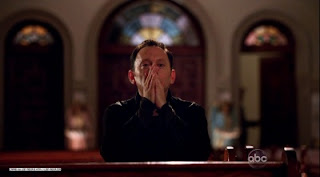