Lost 5x05: This Place Is Death 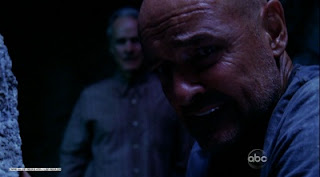 Two episodes after the legitimacy of Locke's destiny is called into question by the fact that he seemingly planted the seeds for it himself back in 1954, this episode seems to reaffirm it by stressing that Locke, not Ben was meant to move the island last season, and that Locke must make the ultimate sacrifice.

Which, of course, also repudiates the notion that Ben was then or still is doing the island's work, and seems to add weight to Sayid's assertion that the only side he's on is his own (this also assumes we trust shifty Christian Maybe Ghost). And yet, even with a reminder that perhaps Ben's motivations to get the Oceanic Six back to the island are purely selfish, I find myself thoroughly enjoying his outburst in the face of Sun and Jack's combined sanctimonious-ness. 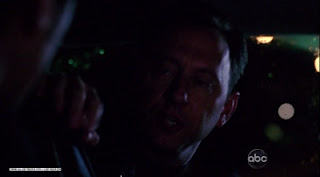 Which made me realize that Darlton have put the Oceanic Six in an odd position so far this season. While their collective reluctance to return to the island and/or trust Ben is understandable, we, the audience, know that evil Ben or not, they need to go back to the island, and thus, all their actions against Ben or their holier-than-thou attitudes towards him just make them impediments to the story. I'm thinking "yeah, yeah, Ben's a dick, but you really do need to go back. So quit fighting him about it." And thus I find myself resenting arguably the main characters of the show. Which is kind of an interesting place for the show to put them. 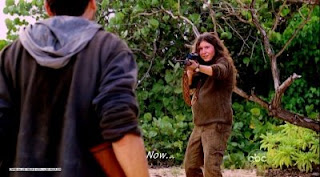 Jin's adventures with Rousseau were a treat, as several minor questions were answered and we got another appearance by Smokey. While Locke's righting of the Donkey Wheel presumably stopped the island from skipping around in time, I hope this isn't the last we see of Rousseau. There's definitely more to the "sickness" her crew developed after encountering Smokey in the temple, and I would love to see how Alex's abduction by the Others played out.

Finally, it seems we bid adieu to Charlotte in this episode, after she dropped some fairly significant info on us. All the theories that she was born and grew up on the island were confirmed. Of course, this being Lost, it stands to reason we've either seen her as a child already or have met one of her parents. Even before her island citizenship was confirmed, the favorite theories pegged her as either Annie, Ben's childhood friend (I think the numbers, in terms of age, are way off for this to be possible) or the child of Ben and Annie (and that Annie fleeing the island with Charlotte may account for the fertility problem on the island) but I think Ben would have reacted differently to Charlotte's appearance last season if she was somehow his daughter. It's also possible she's the daughter of Horace and Olivia Goodspeed (the guy that recruited Ben's dad to the Dharm Initiative and Ben's schoolteacher) or someone we haven't met yet, of course. 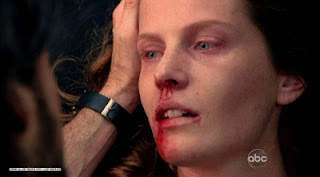 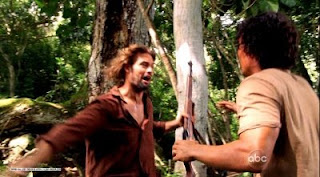 And Ben's outburst at Sun and Jack en route to the church. Whether Ben's EEEVVVIIIIL or just evil, I don't blame him for lashing out at their combined sanctimonious-ness.

Tidbits of Note:
Just as in the last episode, you can hear the numbers on Montand's radio.

Speaking of which, the French crew left Tahiti on November 15th.

Ji Yeon is alive and seemingly well, contrary to some rampant speculation I've seen around the web.

There were hieroglyphics around the temple Smokey was guarding, just as in the Frozen Donkey Wheel cave and Ben's hidden room in New Otherton. It seems some of the glyphs on the temple exactly matched the ones in red that appeared in the Swan hatch when the countdown reached 108.

The "pulling chain" noise of Smokey was present again as he attacked the crew. Montand was drawn down into a hole just as Locke almost was at the end of the first season, before Kate used dynamite to dislodge Smokey.

Now we know how Montand lost his arm... 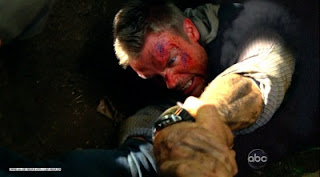 The sickness that affected Rousseau's crew appears to have been caused by contact with Smokey, and is not related to time travel sickness or whatever the Dharma Initiative told the people inside the Hatch was on the island. Rousseau is unaffected because Jin refused to allow her to follow her crew into Smokey's den.

The music box Jin picked up will later be fixed by Sayid when Rousseau captures him in season one.

We can safely assume Robert's gun didn't fire because Rousseau removed the firing pin; Sayid had the same problem in season one, and she mentioned that Robert didn't notice the firing pin had been removed either.

Charlotte was born in 1979, so if she left the island as a child around the age of 7 or 8, that'd be around 1986 or 1987 (or just before Rousseau and company showed up). As a point of reference, Ben initiated the Purge in 1992, so Charlotte presumably left well before then.

It seems that Daniel will attempt to warn a young Charlotte away from ever returning to the island in a clear violation of the rules he cites. He's obviously unsuccessful, yet we know he'll try anyway.

Locke's right leg continues to take a beating, after being broken during the hatch lock down and getting shot by Ethan.

For the second time this season, someone was told to make contact with a family member but was flashed away before getting more details. 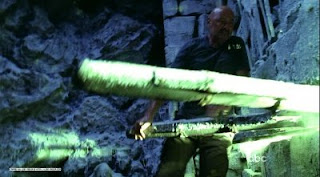 Questions:
Is the temple Smokey is guarding the same temple to which the Others were headed back in season three?

Can we trust the statement that Smokey is a security system for the temple, as it was provided by a "sick" (or possibly Smokey-manifested) Robert? Was Robert's attempt to shoot Rousseau the security system in action?

Did Smokey mimic Montand's voice to lure the others down there, or did Montand survive his initial encounter?

Christian's inability to help up Locke seems to imply that he is non-corporeal, but then how does he hold the lantern, or Aaron last season? Is he a ghost, or just a dick?

How did Charlotte know about the well? The implication from the beginning of this season is that the Orchid was under construction in the early 70s, towards the beginning of Dharma Initiative, meaning the well was probably destroyed/covered over by the time she was born and old enough to remember anything. Has she time traveled before? Is that how she knows more about Carthage than Hannibal?

Where were Penny and Charlie? I only ask because it probably wouldn't be good if they're parking the car or something, only to walk into the church and into Ben's lap moments after everyone else did. 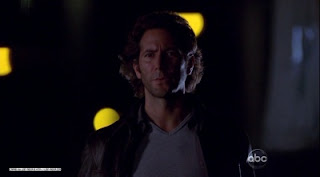 Was that the last time Sawyer, Juliet, etc saw Locke?

Assuming Locke getting the Donkey Wheel back on its track stopped the time traveling, in what time are Sawyer, Juliet, etc? Smack dab in the heyday of the Dharma Initiative, which would account for Faraday's presence in the Orchid, his filming of Chang's comic-con video, and his attempt to prevent Charlotte from ever coming back to the island?

If Locke had turned the wheel last season, would the island have been time jumping the same way afterwards? What I mean is: was it the fact that BEN turned that wheel that set the island tossing about it time, or was it the WAY Ben turned it (so that it ended up off the track, so to speak) that did it? If the later, then would Locke have somehow turned it any differently?

Next Week:
Ms. Hawking lays it all out and Desmond questions everyone's sanity. 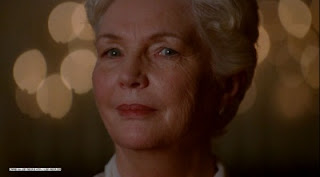