Harrison Ford: The attack on Sylar
Sylar's quest for his father is dangerously close to slipping into Hiro in Japan/Matt in Africa-esque irrelevance by being entirely too removed from the main narrative of the volume. However, having the government continue to attempt to apprehend him helps keep the story from straying too far.

Wesley Snipes: Sylar's return
While I was a bit irked that Sylar took the damn kid along with him after going back for the agents' laptop, I was too busy being confused at the staging of the scene in which he did so to care too much. The way the scene was setup, with the truck suddenly stopping, shaking and then Sylar emerging dressed as a goon, suggested that Sylar somehow snuck along with the Goons in disguise and waited until that moment to attack. But we saw him drive away, which means Sylar should have just caught up with the Goon Squad in his car and took them out. So why did he emerge from inside the van, dressed as a goon? 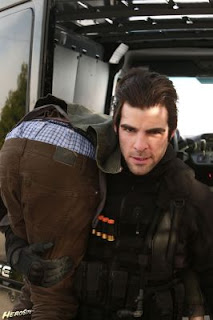 Wesley Snipes: The Indian Picture
Maybe this is just me being dense again, but where in Matt's drawing was it made clear that Hiro had to stop a wedding? All I saw was Hiro, clearly in India, standing between a fallen man and a woman. Yet somehow, Hiro and Ando look at the same painting and somehow know they are intended to stop a wedding.

Tommy Lee Jones: Hiro and Ando's Indian Adventure
On the one hand, I appreciate that Hiro and Ando's jaunt to India wrapped up quickly (as compared to their numerous side trips in the overly-revered first season) and didn't involve too much slapsticky bumbling on the part of either.

On the other hand, it seemed like a colossal waste of time to hammer home the point for Hiro that he can be a hero without powers. A little sidekick envy is fine, but a little goes a long way. The impression I got from the volume's premiere, with Hiro all setup to be Alfred for Ando, was that Hiro was comfortable with his new status, which makes the conclusion reached here all the more a waste of time.

Wesley Snipes: HRG's Motivation
As enjoyable a character as Bennet is, it's long past time his motivation for doing evil extends beyond "protecting Claire." Even lying to Sandra is nonsensical at this point. It seemed clear to me that by now, Bennet was done lying to his family. Sandra knows about Claire and what Bennet has done in the name of protecting her. While I could understand if he didn't go into details with Sandra (such as the fact that he's helping to round up ALL Specials, not just dangerous ones) it doesn't make a whole lot of sense that he wouldn't at least tell her that yes, he's hunting Specials for the government now. Except that the plot needed him to leave home so that Peter and Co. could pull a pseudo-Haitian Whammy on him (which, granted, was a fun ironic moment).

Tommy Lee Jones: Gill Man
I have a pet peeve that carries over to multiple stories: why is that whenever a character discovers an extraordinary ability, no matter what it is, their initial reaction is to assume they're a freak and keep it hidden? If I discovered I had a super power, even a relatively lame one like breathing underwater, I'd talk to my friends about it, show it off, try to figure out how I got it.

And for that matter, why is the government wasting its time hunting down this kid? Seriously, if I was that DHS overseer woman, my first question to Nathan would be "why are you wasting resources capturing Aquaman-lite when far more powerful and potentially dangerous people are running around?"

Wesley Snipes: Tracy's escape
The idea was well conceived: Tracy thinking Nathan set her free to prove his point to the DHS overseer only for us to find out it was actually the Hunter who remorselessly did it. The execution of that idea, however, suffered from major plot-hammering. Why, exactly, did Tracy freeze and kill her hostage, when keeping him alive was her only leverage towards escaping, except for the fact that the plot needed her to kill him in order for the point to be made to the DHS gal? A well-crafted idea that needed better execution to work. 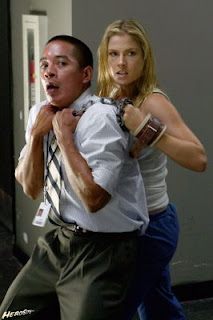 Tommy Lee Jones: Rebel's identity
Rebel either has to be Angela at this point, or a new character. Sending the fax to Hiro and Ando made it clear that Rebel is operating on a scale larger than just texting Claire, and the message that they needed to save Matt Parkman suggests Rebel is, or has access to, a precog, as we see Parkman at roughly the same time as Hiro and Ando read the fax and he isn't in need of saving. Angela, of course, could have dreamt Parkman's upcoming need for help and also dreamt when Hiro and Ando would be India, enabling her to send the fax at the right time.
Newer Post Older Post Home
Posted by Austin Gorton at 8:41 AM