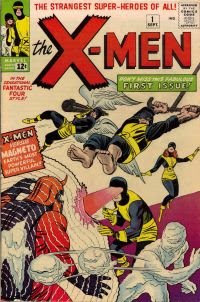 Plot: Professor Xavier leads the X-Men in a training session before introducing them to their newest classmate and teammate: in the words of Professor X, "a most attractive young lady," the telekinetic Jean Grey. While the male X-Men gush over Jean, evil mutant Magneto takes control of the sophisticated missile launching facilities at Cape Citadel for...some reason. A show of force, presumably, to put the fear of mutants into humanity, or something. Professor X sends the X-Men to confront Magneto, who manage to defeat him, though Magneto does escape.

Firsts and Other Notables: Obviously, the original X-Men (Cyclops, Beast, Angel, Iceman and Marvel Girl) all appear for the first time, as do Professor X, Magneto, the X-Men's mansion headquarters in New York's Weschester County, and the notion of mutants as a new species of humanity with "x-tra" abilities that humans don't trust (but they don't "fear and hate" them quite yet). Professor X believes he might be the first such mutant. Magneto uses the term "homo superior" to describe mutants. 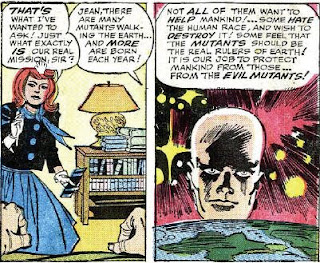 A Work in Progress: Professor X is training the X-Men to receive his thoughts, saying that soon he won't even have to speak to them. Obviously, the idea that one needs training to receive telepathic thoughts goes away quickly. Professor X refers to the cause of his paralysis as a "childhood accident." This is quickly retconned in issue #9. Cyclops is introduced exclusively as "Slim" Summers. No mention is made of Marvel Girl having any telepathic abilities. Iceman's "power on" form looks more like a snowman than look familiar to fans of Spider-Man and His Amazing Friends.

Ah, the Silver Age: Professor Xavier's parents worked on the original A-Bomb project. The narrative caption refers to the missiles in Cape Citadel as "democracy's silent sentinels." The implication is that they're nuclear, with Magneto describing one as "the mightiest rocket of all." Professor X has a jet he can guide from the mansion by thought alone. Angel can strap his wings into an elaborate harness and thus pass himself off as entirely normal. 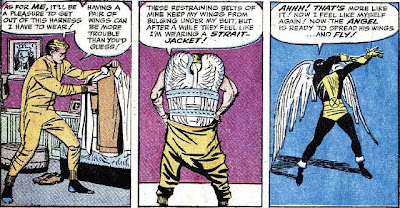 Also, magnetism is magic and can do anything.

"Professor Xavier is a Jerk!": As part of the X-Men's training session, Professor X instructs the super-strong Beast to hurl a bowling ball at a distracted Iceman, to test his reflexes. 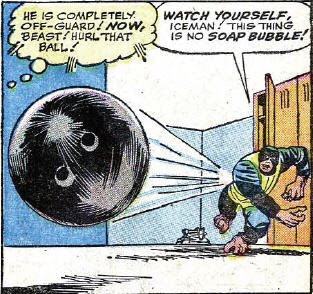 Young Love: All of the X-Men, save for Iceman, fawn over the newly arrived Jean Grey. Beast even kisses her inappropriately, but she fends him off. 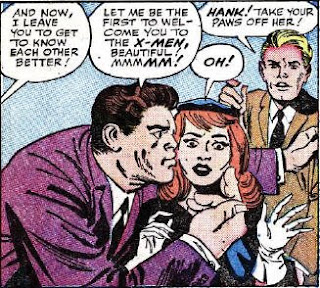 Human/Mutant Relations: The US Military at Cape Citadel takes orders from Cyclops, a masked teenager, with little reservation: 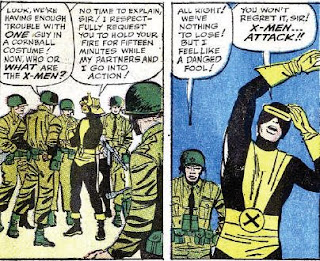 "No time to explain!"
"Fair enough, strange masked teen."
Teebore's Take: The story goes that Stan Lee, after crafting origins for the Fantastic Four, Hulk, Spider-Man and Thor was frustrated with having to come up with a new origin for every new hero he introduced (well, a new way for the hero to get bathed in some kind of radiation, at least) so he basically said "screw it" by coming up with the idea of mutants, people just born with special powers.

He wanted to call the title "The Mutants" but the publisher believed that was too strange a title and would scare kids away, so Stan changed it to the X-Men, so called, according to this issue, for their "eXtra abilities" and not because Professor Xavier has a massive ego.

The issue itself is a fairly straight-forward Silver Age first issue: the main characters are introduced and show off their powers, as is the villain, then the good guys fight the bad guy, saving the day while the villain escapes to fight another day. There really isn't much to it, even by Silver Age standards. It isn't even that goofy, relatively speaking. The concept of mutants being different from humans is introduced, and the distinction made between good and evil mutants. While it's made clear that Magneto believes in mutant supremacy, the basic philosophy of Professor X, that he believes in peaceful coexistence, isn't. In fact, there is little said on the subject of mutants as a persecuted minority; that will come in time, as will the exploration of Magneto's motives for mutant supremacy, such as his experiences in the Holocaust.

The X-Men themselves are given little in the way of individual personalities. As it stands, the biggest thing that separated the X-Men from other heroes on the market at that time was the fact that they were students and teenagers; though Marvel broke new ground with their teenaged Spider-Man, most teenagers in comic books at that point were sidekicks or supporting characters.

In the end, the first issue of X-Men holds up mostly for the novelty of being the issue that made all the major introductions; beyond that, it's a fairly pedestrian Silver Age tale. 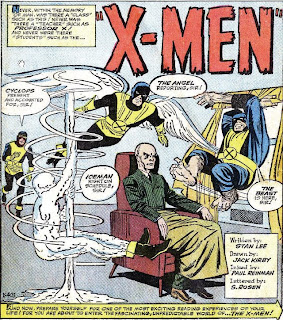