AKA: The Simpsons become caretakers of Burns's mansion, culminating in a party in international waters.

The Setup: After receiving an award for being Springfields's oldest citizen, Burns visits the Mayo Clinic for a checkup, leaving his home in the care of the Simpson family.

Bart: Wow, you can do anything out here
Homer: That's right. See that ship over there? They're re-broadcasting Major League Baseball with implied oral consent, not express written consent -- or so the legend goes.
Homer: Help! Pirates!
Coast Guard: Navy SEALs are on the way.
Homer: Oh, bless you.
Coast Guard: How about a tactical nuclear strike?
Homer: Oh, that would be just ... oh, you're just yanking my chain, aren't you?
Coast Guard: Perhaps this foghorn will answer your question: mwah-mwaaaah.

Burns: Smithers old chum, there's nothing like coming home with a clean bill of health. Oh, and sorry about your news.
Smithers: Thank you, sir.
Burns: Do they know how many eggs it laid in your brain?
Smithers: I prefer not to know. Frankly, one is too many. 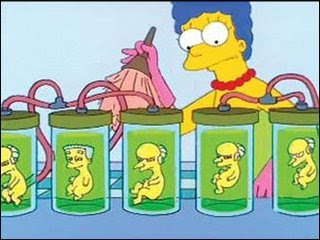 Teebore's Take: Any episode featuring a knife-fighting monkey named Furious George gets a gold star in my book, but monkey knife fights aside, I like this episode far more than I probably should. The "average family gets a taste of the rich lifestyle" is one of those sitcom chestnuts plenty of shows have dusted off through the years and this episode doesn't add anything new to it (it ends with Homer still yearning to be rich). But damn if it isn't funny along the way, especially once the party in international waters starts, with the Coast Guard covering the tunes, the beer flowing freely, attacking pirates, and yes, monkey knife fights.

Zaniness abounds, what with the pirates and various activities taking place in international waters (which I'm pretty sure doesn't work the way this episode describes it) but thankfully, the zaniness works with the humor and not against it.

Goofy Homer is on display here. Even his yearning for a Springfield Pride Award at the beginning comes across as comically naive rather than jerky and arrogant.
Newer Post Older Post Home
Posted by Austin Gorton at 12:00 PM