So in the midst of battling one of the worst bouts of stomach flu I've ever had, Heroes came back after a short winter hiatus, once again promising that the start of a new volume would address the shortcomings of the previous volume. What the creators of Heroes don't seem to realize, as Dr. Bitz put it, is that our problem with the show isn't in the concept, but in the execution.

When fans cried foul at the slow build to season two and the introduction of lame characters like the Dunder Twins, the show responded with the breakneck action and (sometimes) nonsensical plotting of "Villains" at the cost of consistent characterization. After we complained again, the show promised us that the unfurling "Fugitives" arc would slow things down, reign in the time travel and other extreme plot devices and focus once again on character and the "ordinary" part of "ordinary people with extraordinary abilities."

Well, we'll see what happens. But I'm afraid that once again, the creators missed the mark, and in attempting to fix the wrong thing are breaking something else. But this episode wasn't bad, at least not outright. It wasn't awesome, and it wasn't a fix-all, but it was solid. Call me "cautiously and perhaps naively optimisitc" so far.

In the meantime, I'm torn as to how to categorize my analysis of this volume's episodes. The hero/villain didactic doesn't seem appropriate, as we're leaving behind the comic book trappings of those labels in "Fugitives." Similarily, "Hunter/Prey" doesn't seem quite right. So I leave it you, dear reader, to decide how we should best proceed. Let me know in the comments. In the meantime, I'll just do this:

The episode WAS more focused and well-assembled than some of the more sprawling ones from the last volume, with a clear narrative (Claire attempting to help Peter and Parkman) and a few subplots that didn't distract from it, along with a palpable sense of dread and "what next" as everyone was getting nabbed.

Claire is as stubborn and bull-headed as usual, but at least she did something useful as a result of it. Also, the casual mention of her receiving her GED is, I think, an attempt to make it clear that as far as the show is concerned, she's an adult now and that hopefully means all the going-to-high-school, trying-to-be-normal stories are behind us now. 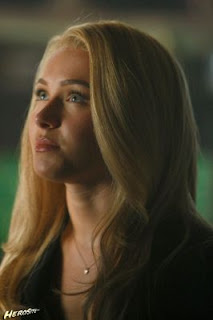 The scene with Peter and Mohinder in the cab was clearly an attempt by the creators to say to the audience "hey, we remember the first season too! We'll try to make the show more like that-remember how you liked that?" but the scene worked for me regardless.

While Ando certainly has a point about his relative uselessness without other super powers around, I loved that Hiro had setup an entire crime fighting unit for him, complete with costume. It was probably the most sensible thing Hiro's ever done in the service of the plot (and I appreciated that he wasn't all whiny about losing his own powers). 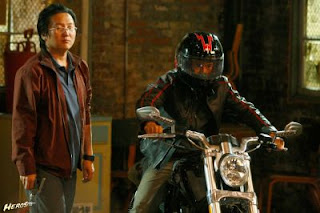 On the subject of Hiro, I'm glad Nathan nabbed him, too. Not only did it show that Nathan's goals extend beyond the country, but it was a nice nod to continutity, since Nathan wouldn't know Hiro is powerless now. 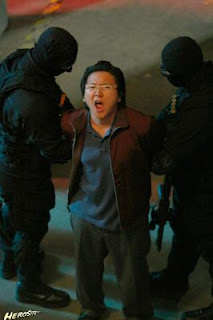 Is it naively optimistic of me to think, with Nathan clearly trying to create the concentration camp/police state that Future Peter originally traveled back in time to stop at the beginning of volume three, that this volume might actually connect back somewhat to what's come before and that the creators aren't approaching "Villains" with the same scorched earth, forget-all-about-it policy they apply to season two?

The previews for next week/the rest of the volume suggest that finally, the characters will work together and rely on another to some degree throughout the course of the volume. I hate the way the show goes out of its way to compartmentalize so many of the characters into little groups in specific areas.

Remember when characters on this show used their powers? That was awesome. I was excited when Sylar fought off the goons just because SOMEONE was finally fighting back with their powers (okay, fine, Mohinder used his power a little too).

This attitude some characters have, especially Parkman, that they'd be better off without powers, seriously irritates me. Having a super power would be AWESOME, and the only person who seems to realize that is Hiro (well, and Daphne). This is one of those places where I just don't think the creators get it...I watch Heroes to see how telepathy would affect how an otherwise normal cop would do his job. I don't watch Heroes to see how a cop with telepathy wouldn't use his power to be a normal cop. If that's what I wanted to see, I'd watch Law and Order or something. Those cops never use telepathy. 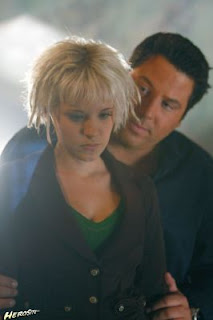 (Incidentally, I'm tempted to call BS on this whole "prophet" thing, especially since we'll probably never get a proper explanation as to how Matt can be telepathic AND precognitive, but clearly there's more to come regarding this story point, so I'll give them the benefit of the doubt for now). 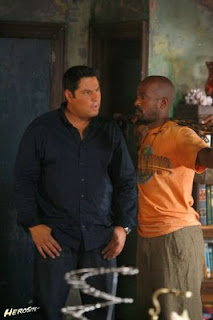 We see that Peter must now absorbs abilities through contact but the show failed to make it clear whether or not he can only store one power at a time. This may seem like a minor nitpick, but by failing to clarify this point, it makes the cliffhanger decidedly less dramatic when I'm thinking "um, what's the big deal? Peter can fly." If the sequence in the plane, when Peter gained Mohinder's strength followed by Tracy's cryokinesis, was meant to make it clear that he only gets one power at a time and it's the last one he absorbed, then that sequence failed in that regard because it wasn't clear to me at all.

I'm waiting to pass judgment on Bennet as a bad guy until his role in this whole thing is explored more. To work with Nathan to this end in return for Claire being removed from Nathan's plans is certainly in character, even if it would be more exciting to watch him work against Nathan, shepharding the fugitives to safety and facing off against Nathan's own HRG, that lead Hunter guy.
Newer Post Older Post Home
Posted by Austin Gorton at 4:41 PM