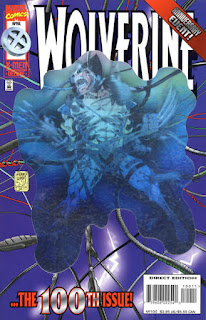 In a Nutshell
Wolverine rejects the adamantium bonding process, becoming more feral than ever before slaughtering the Dark Riders.

Plot
Genesis and his Dark Riders begin the process of bonding Cyber's adamantium to Wolverine's bones, while Cannonball, joined by Zoe Culloden, watch from a hidden alcove. Cannonball wants to jump in and try to stop the process, but Zoe insists they need to observe longer. She shows him the place where Genesis intends to use the prisoners he's captured to restore Apocalypse, encased in a sarcophagus in the center of the room. They then return to the bonding chamber to find Wolverine resisting the process, prompting Genesis to order more power given to the procedure. Cannonball wants to intercede but Zoe says they need to wait for the right time, then teleports away to take care of other matters. But as the Dark Riders announce Wolverine is finally accepting the metal, Cannonball springs into action. He manages to damage some of the equipment, but is caught by the Dark Riders. The sight of them beating Cannonball to a pulp stirs something in Wolverine, and he wills the adamantium out of his body, triggering an explosion that sends adamantium shrapnel flying. Cannonball & Wolverine, now feral, flee deeper into the citadel, where Wolverine picks off the Dark Riders, one by one, before turning to face Genesis. Meanwhile, Cannonball opens the sarcophagus to find it empty, with no sign of Apocalypse or his body. He returns to Wolverine's side to find Genesis dead. Wolverine growls an apology, then runs off on his own. Elsewhere, Stick visits Elektra and tells her a warrior has fallen; she leaves to begin her journey to help him regain his path.
Firsts and Other Notables
This marks the beginning of the Feral Noseless iteration of Wolverine (though he still has something of a nose here), in which the character rejects Cyber's adamantium and in the process reverts to a more feral, beast-like state, closer to animal than man (Uncanny X-Men #332 spells some of this out a bit more, the idea being Wolverine realized he had to fully succumb to the animal inside him in order to reject the adamantium), as had been teased throughout the preceding twenty-five issues while Wolverine struggled to maintain his humanity after losing his original adamantium skeleton (this also means the Bone Claws iteration of the character isn't going away anytime soon, either). 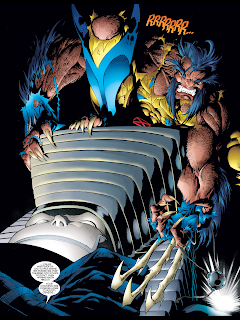 Wolverine's quest to regain some measure of his humanity will be the narrative driving the series for the foreseeable future, and while this take on the character has few fans, much as with the way the bone claws eventually settled in as not being terribly different, in practice, from his metal ones, eventually Wolverine will simply be more or less back to normal, his re-evolution coming along gradually (vs. as the result of a specific incident); within six months or so, he'll be noticeably more human, while by the time of "Operation: Zero Tolerance", he's more or less back to normal.
This issue effectively marks the end of Genesis' incarnation of the Dark Riders which debuted in Cable #17. Hurricane & Lifeforce are killed when Wolverine rejects the adamantium, caught in the blast when it explodes out of the bonding tank. 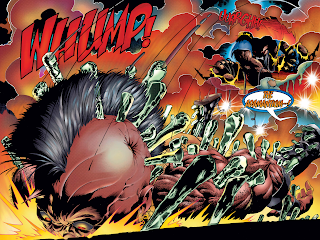 The rest (save for Dirt Nap, who runs away) are slaughtered by Wolverine during his post-devolution rampage. 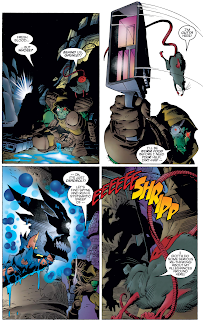 Finally, Wolverine then kills Genesis, asking Cannoball to tell Cable he's sorry for doing that to his kid. This marks' the final appearance to date of Gensis, a relatively minor character in the grand scheme of things but nevertheless a recurring and not insignificant presence throughout the X-books within a narrow window of time, especially when taking into account his (still odd) role as Mr. Tolliver and the shadow that character cast over the early issues of X-Force. 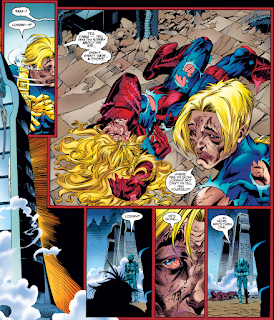 Genesis' plan to restore Wolverine's adamantium skeleton and brainwash him into serving as Apocalypse's Horseman of Death fails here, but Apocalypse himself will eventually succeed in doing just that (with Wolverine serving as Death for a brief period of time) in issue #145 (Apocalypse will even use adamantium stolen from another villain, just as Genesis attempts to do with Cyber's adamantium here). 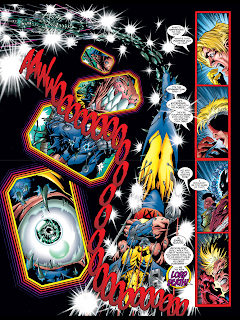 Gensis' other plan in this issue is to seemingly resurrect Apocalypse, using the life force of the people the Dark Riders were shown taking captive in the previous issue to bring him back to life, though when Cannonball opens the resurrection sarcophagus, it is empty, forcing Cannonball to conclude that Genesis was either lying, delusion, or that Apocalypse had already returned  (we'll find out it was the later in Uncanny X-Men #335, though it's not entirely clear if he was specifically restored in that issue or Cable #19; either way, it didn't happen here). 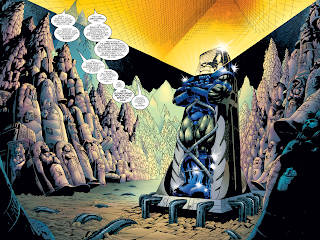 In the issue's only cutaways to events happening outside Genesis' citadel, Daredevil's martial arts mentor Stick and his former foe/girlfriend Elektra learn of Wolverine's plight, with Elektra departing to help him find his way; she will function as a supporting character within the series for the next half dozen issues or so, helping Wolverine regain his lost humanity. 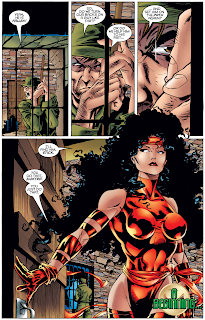 Zoe Culloden returns off-panel between issues and teams up briefly with Cannonball, making cryptic comments suggesting she knows what's going to happen, before teleporting away again. She will appear again in Uncanny X-Men #332, but that appearance will do little to resolve the questions she inspires here (and, really, throughout the entire run-up to this issue).

This double-sized issue features a holographic cover, which toggles between Wolverine and an adamantium skeleton. It shipped a month late; cover dated May of 1996, it went on sale in March, the same month as issue #101. It also leads directly into Uncanny X-Men #332 (which itself crosses over directly with Wolverine #101), which is why I bumped it up in the review order to the top of the May '96 issues.

A Work in Progress
Foreshadowing the new status quo, Genesis underlines the notion that without adamantium bones giving his healing factor something to constantly be working against, Wolverine is destined to devolve into a mindless beast-man. 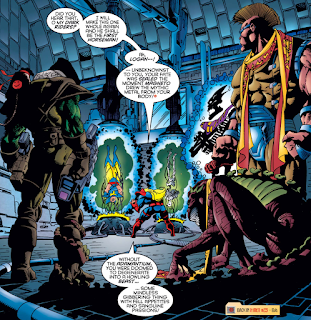 The Dark Riders (rightly) debate the merits & likely effectiveness of Genesis' "wipe Wolverine's mind and give him memory implants" plan.

The Grim 'n' Gritty 90s
The Dark Riders (or at least Lifeforce) are suddenly experts in molecular biology. 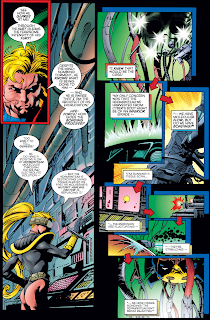 Also, it's pretty funny that the Dark Riders are attempting to bond metal to Wolverine's bones but they're sure to leave him in his X-Men uniform, complete with mask, while he's floating in a tank of saltwater (at least as presented in "Weapon X", Logan was more or less naked during the original bonding process).
Austin's Analysis
From the delightfully campy story title to the vertical double-page splashes, this issue is a suitably baroque and over-the-top celebration of one hundred issues of the spinoff book Chris Claremont never wanted but whose existence was inevitable. It is also the culmination of everything Larry Hama and Adam Kubert have been building towards since the return from "Age of Apocalypse" (and really, since issue #75): the restoration of Wolverine's adamantium (which turns out to be one hell of a feint) and the question of balance between Wolverine's human and animal sides (with the animal side winning out for a change). For all that, it's a surprisingly insular issue (and a quick read, thanks to those splashes and Kubert's generally larger-than-life - though still quite nice and effective - pencils throughout), taking place almost entirely in one setting, with the title character incapacitated or off-panel for the majority of it (this is an issue in which important things happen to Wolverine, but Cannonball is very clearly the protagonist driving most of the action).
Whereas the payoffs to these kinds of long-running storylines, especially ones coming in big round-numbered issues in the 90s, tend to be sweeping and epic, here Hama & Kubert keep the focus small. It's an interesting decision, and it's one that doesn't quite work (too much of Wolverine's perspective comes from other characters telling readers what he's thinking or doing), at least until Wolverine breaks free (and the issue shifts to a more horror-like style, which helps sell the ramifications of Wolverine's transformation), but does stand out for being a different approach. It's not often that an issue like this renders its title character as a passive actor for 2/3 of its pages.
And then there's the new status quo this issue sets up. It's difficult to separate what happens here with what's to follow and, let's be frank, feral, noseless Wolverine, rightly, isn't the favorite iteration of the character for very many fans. But if Hama later fails to sell and/or make the most of the new take on the character established here, he should nevertheless be applauded for the tremendous swerve in NOT restoring Wolverine's adamantium. After twenty-five issues of the character (one of Marvel's most popular in their most popular comic book even as the comics industry craters around it, at a time when millions of fans are turning in every week to watch a traditional representation of Wolverine via the animated series) operating "off-model", and with the series' one hundredth issue right there (all the better to bookend the "bone claws" era with a pair of anniversary issues), the enticement to restore Wolverine's adamantium must have been tremendous.
But Hama, to his credit, zags where everyone clearly expected him to zig, deciding instead to go the other direction and push the character even further off-model. Sure, it would be nice if the resulting stories, as we'll see, were better, but it is nevertheless one hell of a flex: instead of playing it safe, Hama seems to be saying, why not do something unexpected with a character whose popularity is so great it can likely survive the unexpected (something he wouldn't be wrong about)? What comes of that decision to do the unexpected may not be the best, but for this issue, at least, Hama (and Marvel, for letting him do it to their cash-cow character) deserves credit for doubling down on the different, instead of taking the opportunity to revert to the safe, expected, familiar, status quo.

Next Issue
Next week: the X-Men go looking for their teammate in Uncanny X-Men #332, X-Factor gets a new member in X-Factor #122, and the Cable/X-Man crossover concludes in Cable #31!