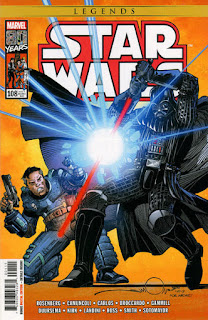 In a Nutshell
Domina Tagge returns and attempts to retrieve the Crimson Forever jewels, but is stopped by Valance the Hunter.

Plot
On Centares, a group of scavengers discuss the history of Valance the Hunter as they harvest scrap metal. Meanwhile, on Stenos, Han & Chewbacca meet with a potential client with a large bounty on his head. When hunters turn up trying to capture him, a fight breaks out, and their client is killed. During the melee, Han & Chewie run into Jaxxon & Amaiza, who were also looking for their client, and learn that the bounty was placed by Domina Tagge. On Centares, the scavengers turn their find over to agents of Domina, while Han warns Leia about her re-emergence and they speculate she is attempting to once again unleash the Crimson Forever. In deep space, Valance's damaged body - lost amidst the scrap scavenged on Centares - reactivates, and he attacks Domina's agents. Meanwhile, Han & Leia lead a force to the outskirts of the galaxy, to the drifting Star Destroyer where they abandoned the Crimson Forever jewels. Domina and her forces arrive shortly thereafter, and the parties race aboard the Star Destroyer to retrieve the jewels. Jaxxon manages to get ahold of the jewels but refuses to hand them over to Leia, triggering a standoff that is interrupted by the arrival of Valance. He uses the jewels to restore his lost flesh, but is blasted by Domina. In the ensuing fight, one of the jewels is tossed out into space, thereby infecting everyone in the vicinity of the other jewel with the Crimson Forever plague. But Valance grabs the remaining jewel and, paying Luke back for saving his life, dives out of the ship.  In space, Valance brings the two jewels together, thereby curing the infected, before drifting into the nearby star, sacrificing himself to end the threat of the Crimson Forever once and for all.

Firsts and Other Notables
Released as part of Marvel's 80th anniversary celebration (in which a variety of different one-shots were released featuring reunions of celebrated creative teams or revisiting key moments from the company's history), this issue is meant to serve as the 108th issue of the original Marvel Comics series, which ended in 1986 with issue #107 (after which the Star Wars license went to Dark Horse for many years, before eventually being reacquired by Marvel after Disney purchased both Marvel Comics & LucasFilm).

Along the way, it brings up several different fan favorite original characters from the series run, most notably Valance the Hunter, the droid-hating bounty hunter who eventually saw the error of his ways thanks to Luke's friendship with Artoo & Threepio and died fighting Darth Vader. Already made canonical at this point via the Han Solo: Imperial Cadet limited series, this issue reveals he survived his encounter with Vader, only to end with him once more sacrificing himself to save Luke. 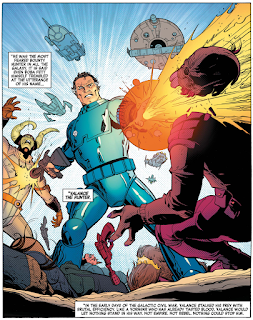 Along with Valance, this issue sees the return of Jaxxon, the large green bipedal rabbit, and his companion Amaiza, who were amongst the characters Han assembled in the Magnificent Seven-esque story that represented the series' first original story after it completed adapting the first film. 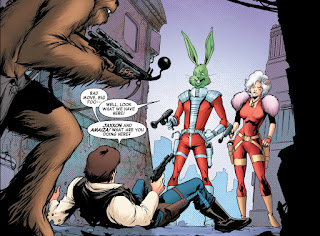 The villain of the story is Domina Tagge, last standing member of the House of Tagge which battled the Rebel Alliance during the post-New Hope, pre-Empire era of the series. Domina returned for issue #50, which introduced the Crimson Forever (a lethal virus which is spread and cured by a pair of jewels somehow); the plot of this issue centers around her efforts to reacquire it and the Star Warrior's efforts to stop here. 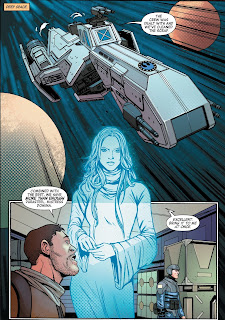 The Tof-Nagai War, the ongoing conflict involving the New Republic and Mandalorians forming an uneasy alliance with the Nagai against the vicious Tof which formed the narrative spine of the series (original) final issues, gets name-checked here, with Dani, one of the more significant original characters from the series' final days, said to be part of a scouting mission the New Republic has lost contact with, which is used to validate Jaxxon & Amaiza's statement that Domina is active once mire.

Being a comic published in the Year of Our Lord 2019, this featured multiple variant covers, including a nifty one by Michael Golden. 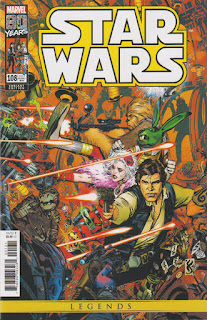 A Work in Progress
Valance’s origin is tied directly to the Clone Wars, establishing a history fighting droids before joining the Empire, and suggesting that experience may have contributed to his self-loathing. 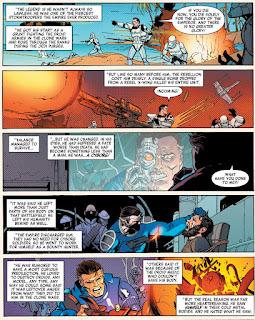 One of the scrappers mentions the Witches of Dathomir riding Rancors, which is a reference to the novel Courtship of Princess Leia. 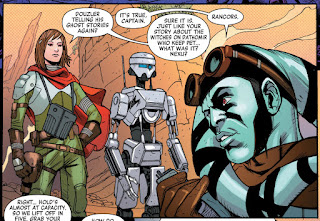 Ham & Chewie take a meeting on Stenos, one of the recurring settings during Jo Duffy's run, and a Hiromi can be seen in the background. 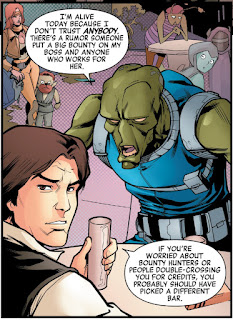 Dialogue in one panel effectively transitions the nomenclature of the post-Jedi Rebel Alliance from the Alliance of Free Planets (the original term used in the comic book series) to the New Republic (the term used in the old Expanded Universe and current canon). 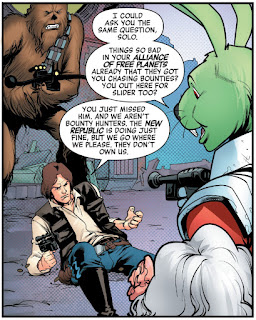 One of Domina’s underling uses a model of blaster similar to the one Rey adopts in Force Awakens. 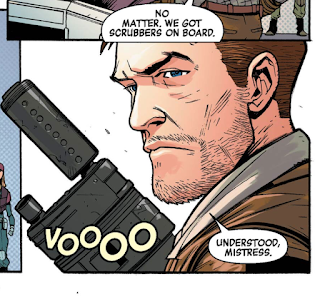 Domina is said to be funded by the Tof resistance.

Bounty Hunters Bossk & IG-88 are working with Domina, both played similar henchmen-type roles during Jo Duffy's run on the book. 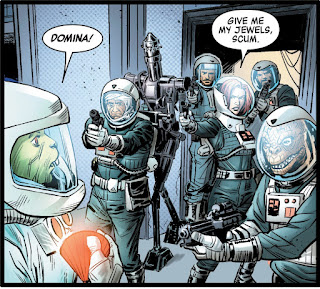 Domina seems to know that Luke and Vader are related. 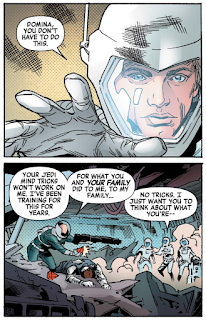 The Falcon has had a new escape pod installed, which resembles the pod Threepio & Artoo used to land on Tatooine in A New Hope. 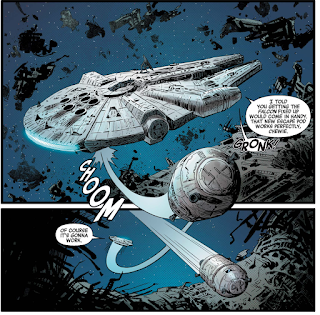 Use the Force
Luke is able to use the Force to stop a crashing Millennium Falcon. 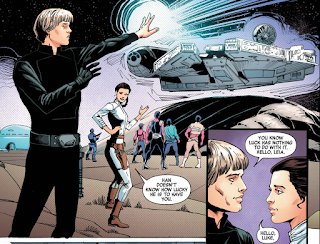 Remember The Empire Strikes Back?
Threepio tries to tell Han the odds, but he shuts him up. 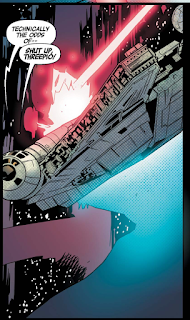 Austin's Analysis
While ostensibly a continuation of where the series left off with issue #107 just by dint of its numerical designation, this issue really doesn't pick up where a theoretical 108th issue would have: the recently-concluded Tof-Nagai War is referenced, as is Dani, but none of the characters or plotlines (Dani, Kiro, the Rik Duel Gang, Zeltron politics, etc) feature much in this issue. Instead, it operates much more as a celebration of the series' history, or, rather, a few specific pieces of it: Jaxxon, Valance the Hunter, Domina Tagge, and the Crimson Forever disease from issue #50. And certainly, weaving those elements together makes sense, and is, for the most part, entertaining. Neither Jaxxon nor the Crimson Forever is held in as high a regard for me as it clearly is for the creators involved here, but Valance the Hunter is one of the series' best original characters, while Domina Tagge one of its best (and underused) original villains, so revisiting them here is fun to see.

The story does suffer a bit, as many of the latter day Star Wars issue did, from having these original characters overshadow the movie characters (an understandable occurrence when the series was original published and LucasFilm put the kibosh on any significant character developments; less so here, in an issue written decades later and billed from the start as a non-canonical "legend"): this is, ultimately, a story about Valance fighting Domina Tagge while Jaxxon fills the rogue-ish Han Solo role, with Luke, Leia, and Han mostly just along for the ride. But, again, that is in keeping with the spirit of the series, which often found its most captivating (or at least most original) material from characters whose fates weren't tethered to the films. So while this issue might represent a missed chance to finally do something BIG with the main characters and push the series' narrative in some unexplored places, positioned as it is from the outset as entirely non-canonical, it is nevertheless a pretty effective celebration of the spirit of the original Marvel Comics run.