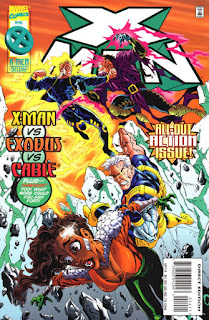 In a Nutshell
Nate battles Exodus

Plot
As Nate battles Exodus, Cable avoids the avalanche triggered by their fight. Nate finds he can easily outmatch Exodus in terms of power, but also that Exodus draws strength by absorbing Nate's power, so he switches tactics and hits Exodus with a massive uppercut, sending him reeling. Meanwhile, in Paris, Madelyne Pryor is staying with Selene and preparing some food when she cuts herself, and realizes it only hurt after she noticed the cut. Meanwhile, back in Switzerland, Nate and Threnody put some distance between themselves Exodus, while Blaquesmith argues with Cable, who refuses to consider killing Nate, wanting instead to talk with him. Exodus catches up with Nate, and they resume their fight. Cable tries shooting Exodus, but he easily blocks the bullets. Exodus seems poised for victory, until Nate senses his connection to Apocalypse in his mind. Fueld by his rage at Exodus' association with a being Nate hates, Nate pours enough power into Exodus that he exceeds his' capacity to absorb it. He then throws Exodus into a crevasse in the Earth and seals it behind him. Flush with power and seething with fury, Nate then turns to Cable, Blaquesmith & Threnody. He mocks the fear he senses in all of them, saying he senses it in every mind he encounters on this unspoiled Earth, yet he's only just begun...

John Ostrander's brief run as the series' writer concludes this issue (with incoming writer Terry Kavanagh scripting over Ostrander's plot). More a transitional writer between series creator Jeph Loeb and Kavanagh (who will have an unfortunately-length run on the book), Ostrander nevertheless turned in some of the series' best non-"Age of Apocalypse" issues thus far (by, admittedly, clearing a very low bar).
This is the second part of the three part "Identity Crisis" crossover with Cable, and the issue ends with Nate, having apparently pushed past the physical limitations of his power, flush with power and raging at the fear of everyone he's encountered in the world, seemingly turning to the dark side, thereby realizing Cable & Blaquesmith's worst fears. 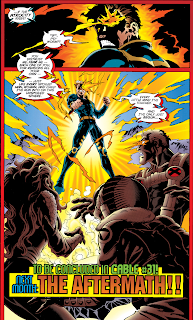 Nate ultimately defeats Exodus this issue, overloading him with power then sealing him inside a massive crack in the earth, thereby exiting him from the crossover. Exodus will next appear in the Magneto limited series, where he will reform a version of the Acolytes and serve as that series' central antagonist. 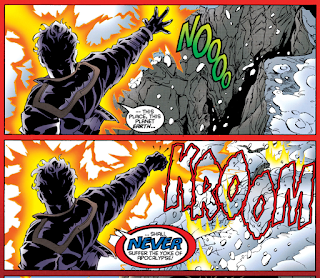 The connection between Apocalypse & Exodus, something teased in Cable #30, is reinforced here (Exodus will eventually be revealed to have been found by Apocalypse in medieval times and locked in stasis until the present day, thereby somewhat oddly giving him a strong connection to two of the X-Men Big Bads).

In the issue's one subplot sequence, Madelyne pops up, still living in Selene's Paris house. She cuts her hand while cooking, but doesn’t feel any pain until she notices the cut (this is meant to further setup the later revelations involving the nature of her existence). 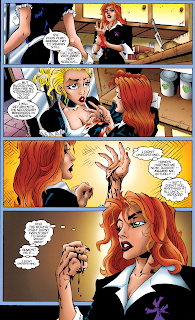 The issue concludes with a Steve Skroce pinup of the Nathans fighting one another. 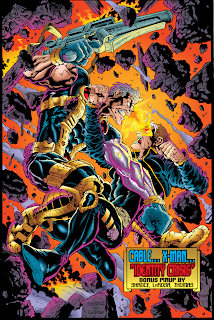 A Work in Progress
Early in the fight with Exodus, Nate pushes his powers too far, which results in him bleeding from the ears and nose. 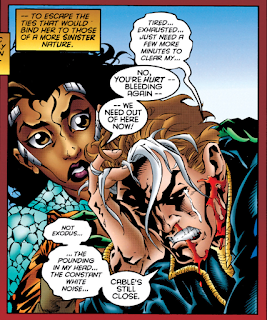 The Grim 'n' Gritty 90s
If you were dying to see Nate wield one of his 616 counterpart’s signature comically-large guns, you’re in luck. 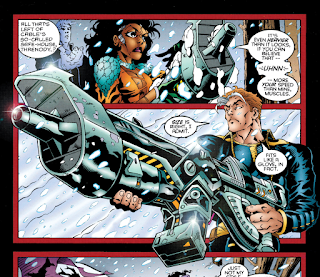 Austin's Analysis
It's the action-oriented middle chapter of the crossover, and it goes about how these things go. Thankfully, Steve Skroce is on hand, and while there's still only so much that can be done with two characters hurling blasts of energy at each other (plus, Exodus doesn't even get to wear his whacky but visually-distinct ornamental costume with the big metal "wings" on the back, instead appearing as a random dude in a robe), Skroce does what he can to lends the proceedings the same kind of energy that made the series' original Age-of-Apocalypse-set issues so much fun. The issue-ending turn of Nate, seemingly, to the dark side, is also effective, just because so much time has been spent in the run-up on establishing how powerful Nate is, and because Cable spent so much of this issue sort of hopelessly holding his big gun and being outmatched, that it creates genuine suspense regarding what happens next, even if it's safe to assume the title character isn't making a permanent change to cosmic villainy nor is poised to be killed off. So not the most engaging of issues, especially taken on its own as a finite storytelling unit, but by visually echoing some of the series' better issues from another time, it's much better than the average issue of the series at this point.
Next Issue
Next week, Wolverine has a date with some adamantium in Wolverine #100!