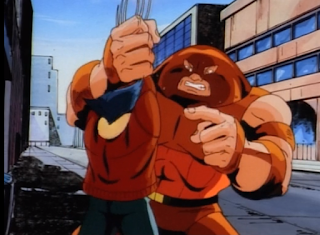 Plot
The X-Men return home from Genosha to find the mansion destroyed; they search the wreckage and discover a message from Xavier saying he is leaving the school for a time, recorded before the destruction. Wolverine picks up the scent of the culprit and, against Cyclops' orders, heads out on his own to follow the trail. He is followed by Jubilee, Rogue & Storm. In the city, Jubilee encounters Colossus, who is tearing down a building. Wolverine briefly believes him to be the one who attacked the mansion, but when he gets close enough to smell him, he realizes he is not. When Colossus is wrongly arrested for a bank robbery, Storm & Rogue break him out of jail, while Wolverine & Jubilee find the real culprit: Juggernaut. They try to stop him, but he is too strong. The rest of the X-Men arrive, and Jean says she can't control Juggernaut's mind because of his helmet. Working together along with Colossus, the X-Men manage to remove Juggernaut's helmet, at which point Jean wipes his mind. Back at the mansion, Colossus offers to help rebuild it, while Wolverine & Jubilee both realize they've come to think of the place as home.