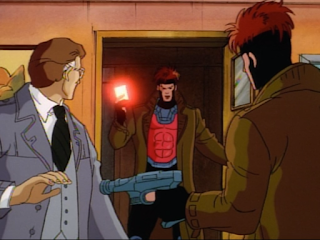 "Days of Future Past Part 2"

Original Airdate
March 20, 1993
Producer: Larry Houston
Story: Steven Melching
Storyboard Artist: Larry Houston
Story Editor Developer: Eric Lewald
Writers: Robert N. Skir & Marty Isenberg
Plot
Bishop accuses Gambit of being the assassin who will bring about the terrible future from when Bishop hails. Though the X-Men stop Bishop from killing him, the X-Men aren't vehement in their support of Gambit, prompting him to storm out. Later, Bishop catches Gambit in the hanger, preparing to leave for Washington DC. Bishop thinks he's caught Gambit red-handed, but Gambit insists he's going to clear his name. The rest of the X-Men arrive, and Xavier deems Gambit's plan too risky; he and the rest of the X-Men are going to Washington for a summit on mutant affairs, but Gambit, Bishop and Wolverine will stay behind. In Washington, the X-Men assume lookout positions, determined the catch the assassin, as the mutant affairs committee begins their discussions. At the X-Mansion, Gambit triggers a distraction, and heads for Washington himself. At the summit, Pyro, Blob & Avalanche attack, targeting Senator Kelly. The X-Menspring into action, but Senator Kelly is seemingly targeted by Gambit. Just then, the real Gambit appears, followed closely by Bishop. He prepares to kill both Gambits, but Rogue damages his temporal transceiver, sending him back to the future, after which, the Gambit who tried to kill Kelly revels herself to be Mystique, who is also Rogue's foster mother. With Kelly safe, Rogue reluctantly lets her mother go free. Bishop finds himself back in the future, but little has changed. He believes he's failed, but Forge says that some other terrible event must have occurred. Back in the present, Professor X tries to meet with Senator Kelly in the aftermath of the failed assassination, but the X-Men discover he's been kidnapped from his office. Professor X believes he knows who took the senator, because as he entered the office, his watch became...magnetized.
What to read the rest before everyone else? Become a patron via Patreon!
Become a Patron!
Newer Post Older Post Home
Posted by Austin Gorton at 12:00 PM