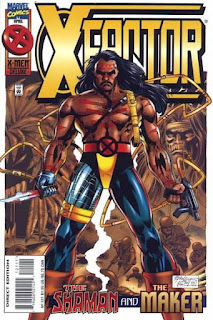 In a Nutshell
Forge defeats the Adversary

Plot
Forge awakens from a dream in which his teammates have been cast as the members of his Vietnam platoon to find Naze watching over him. Roma appears, and tells them she will hold the Adversary at bay while Naze prepares Forge. Meanwhile, Val Cooper confronts her superior about Sabretooth, but he uses the opportunity to show off Sabretooth's control collar; Val remains reluctant about the idea of him joining X-Factor. Meanwhile, Forge & Naze travel to the Rocky Mountains, where Naze helps rebuild Forge's magical strength, and offers him a choice of weapons, a knife and his Neutralizer gun, each representing magic or science. As Roma falters, the Adversary confronts Forge, who uses a combination of both magic and science, channeling his sorcerous abilities through the knife and into the gun, to blast the Adversary and banish him back to his home dimension. Though both Forge & Naze believe he will return again, his defeat revives the rest of X-Factor, and Forge is content, for now, to live in peace.

Firsts and Other Notables
The issue marks the conclusion of the Adversary storyline, as Forge realizes he needs to use both science and sorcery to defeat the Adversary and then...does, ending his threat. Technically, he banishes the Adversary and doesn't kill him, as the villain will make some brief appearances again many years down the road. 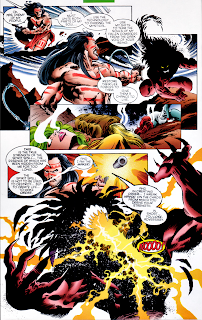 This is also Steve Epting's last issue as the series' regular penciler, a run which began during "Age of Apocalypse" with Factor X #1. He will continue to do work for the X-office over the next few years though, presumably in response to the fact that his run on this book featured nearly as many issues with guest artists as issues drawn by him, it will mostly come in the form of one-shots and limited series. While Epting's presence on the book was inconsistent, when he did appear, it immediately improved what was some otherwise poor-to-middling issues, a boon the series will lack going forward.

Sabretooth's march towards joining the cast of the book continues here, as the inhibitor collar he will wear to keep him from killing anyone without orders is introduced (via some clearly re-lettered dialogue). 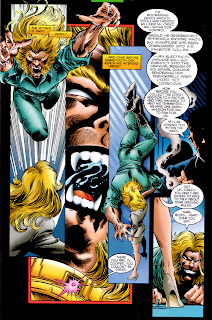 Though unnamed & appearing only in shadows in this issue, the superior Val meets with in this issue is General Bowser, making this his first appearance; he will have a recurring presence in the series going forward, functioning in an antagonist role for Val. 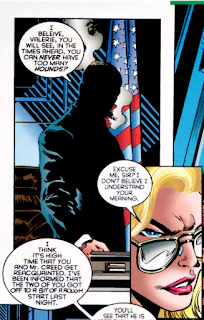 General Bowser uses the word "hound" in a way meant to draw attention to the word; a loaded term in the X-Men universe (Rachel Summers was one of Ahab's Hounds in the "Days of Future Past" future, the Shadow King called his mental thralls Hounds in the Uncanny X-Men story which introduced Gambit), Mackie will play around with the notion of the government creating "hounds" in future issues, but nothing terribly relevant comes of it.

A Work in Progress
Forge has rebuilt his leg & hand, destroyed by the Adversary last issue.

It’s confirmed here that the Adversary worked behind-the-scenes to corrupt Forge’s magic throughout his life, notably when he cast the spell using the souls of his fellow soldiers in Vietnam. . 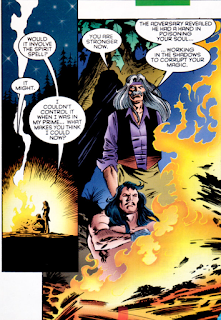 Because nobody in this story stays dead, Roma turns up alive and well. 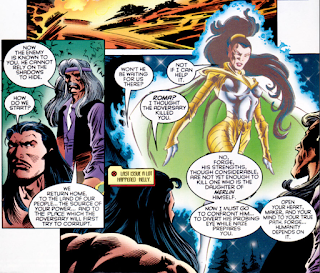 Forge's choice between magic and science is represented by the knife the Adversary tried to trick Storm into using to kill Forge in the run-up to "Fall of the Mutants" (magic) and the Neutralizer gun Forge created which robbed Storm of her powers (science).

The Adversary is unable to restore Shard’s soul. 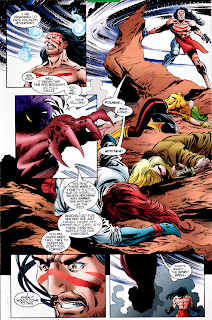 Austin's Analysis
If, after months of build-up via subplot, the climax of this Forge vs. Adversary Redux story felt abrupt in the previous issue, then it shouldn't be a surprise that the conclusion of it here feels similarly rushed, as Forge is faced with two options, fight the Adversary with magic or science, represented by a dagger and his Neutralizer, and he makes the obvious choice to use both. A page later, the Adversary, whom all of the X-Men once had to die in order to neutralize, is destroyed. In many ways, it's the perfect example of a Howard Mackie plot: refusing a binary choice for a solution that embraces both options isn't a bad story turn, it's just the easiest and most obvious one, which is usually the route Mackie goes. Epting's art, as usual, helps elevates this conclusion somewhat, but as this is his last issue on the title, that saving grace will no longer be in play going forward.

Ultimately, while it's tempting to immediately call foul on the idea of bringing back the Adversary, doing so in theory isn't sacrilegious enough to be dismissed outright - the X-Men chapters of "Fall of the Mutants" are solid super-heroics that setup an interesting new direction for the series, but they probably don't crack many top 10 lists for all time classic stories. But the problem with this story isn't the premise so much as the execution of it, which, while competent enough, doesn't really seem to be worth the hassle. Forge battling the Adversary and embracing his mystical past in the process doesn't exactly have much to do with what are meant to be the ostensible themes of a book about the government's mutant team (aside from the very basic fact that Forge is a member of that team), something underscored by the fact that the bulk of the team itself is "killed" at the climax and are mostly absent from the conclusion here (they appear only in dreams and as dead bodies, revived briefly at the end).

It's also hard to read this as the epic, world-shattering showdown it's meant to be when even here, in the final chapter, the narrative is cutting away to further subplots setting up upcoming events: it somewhat lessens the stakes of Forge's fight with the Adversary when we cut away from it to Val Cooper worrying about Sabretooth joining the ranks of the dead (as far as the story is immediately concerned) team in the future. The end result is a story that evokes less "how could you?" outrage over undermining a more classic story, and more "why even bother?" ennui. And while this effectively represents the high-water mark of the post-"Age of Apocalypse" iteration of the series - which still has some two dozen plus issues to go before its ultimate revamp/cancellation - thst speaks much more ill of what's to come than to the merits of this story.