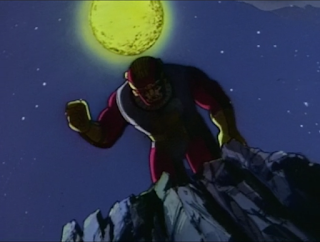 Original Airdate
March 27 1993
Producer: Larry Houston
Story: Steven Melching
Storyboard Artist: Larry Houston
Story Editor Developer: Eric Lewald
Writers: Robert N. Skir & Marty Isenberg
Plot
As the X-Men search for the kidnapped Senator Kelly, Magneto explains to Kelly how he'd hoped Kelly's death would trigger a war between mutants & humans. But before he can kill Kelly himself, Sentinels attack, rescuing Kelly. The X-Men are able to track Magneto's location and arrive shortly thereafter, bringing the injured Magneto back to the X-Mansion. Senator Kelly is brought before Bolivar Trask & Master Mold, who reveals his plan to replace the brains of world leaders with computers. Meanwhile, using Gambit's memories of his experiences on Genosha, the X-Men track down Henry Peter Gyrich. When Gyrich calls Trask for help, Gyrich learns of Master Mold's plans. The X-Men resolve to stop the Sentinels, despite the tremendous odds against them. Arriving outside the Sentinel's base inside a mountain, Storm, Rogue & Jubilee distract the Sentinels while Cyclops, Gambit, Wolverine and Jean Grey penetrate the base to find Kelly. As Wolverine & Gambit engage Sentinels inside a mine and Magneto joins the fray outside, Cyclops & Jean rescue Kelly & Trask, who triggers an explosion he hopes will destroy Master Mold. But as the X-Men themselves barely escape the explosion, Master Mold bursts out of the mountain. Professor X, flying the Blackbird loaded with explosives, crashes into Master Mold, destroying it. Xavier is rescued by Magneto, and the pair depart on reasonable terms. Later, Senator Kelly, having seen the errors of his way, calls for tolerance for mutants, and arranges Beast's release from prison. Cyclops & Jean enjoy a picnic together, and Cyclops proposes to Jean. But the pair are being unknowingly watched by something...sinister.
What to read the rest before everyone else? Become a patron via Patreon!
Become a Patron!
Newer Post Older Post Home
Posted by Austin Gorton at 12:00 PM